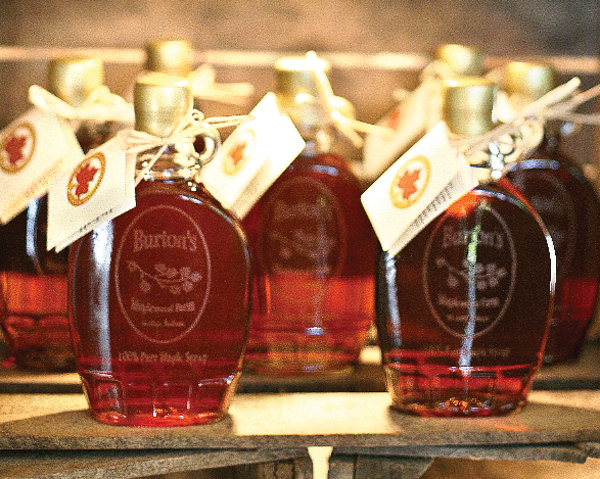 When winter days get warmer but the nights still drop below freezing, it’s that most magical time of year: maple sugaring time. Maple syrup—real maple syrup—is so much more than Mrs. Butterworth’s and her high-fructose entourage. The authentic stuff has been produced naturally for hundreds of years by operations large and small. You’ll find sugar shacks throughout Ohio and Indiana, and many enterprising tree tappers are happy to give tours of their sugar bush operations—and maybe even some samples. Festivals and events pop up annually, and a beloved national festival kicks off the season.

National Maple Syrup Festival
Medora, Indiana, is maple syrup Mecca: The first and second weekends in March are forever reserved for the National Maple Syrup Festival, held at nearby Burton’s Maplewood Farm. Parked in the lovely rolling hills of the state’s southern half and surrounded by maple trees, Burton’s is owned by Tim and Angie Burton, and holds a serious maple syrup pedigree: Angie’s ancestors settled the area in 1810, and were tapping trees even then. The farm produces 100 percent pure maple syrup. They even turn out boozy barrel-aged varieties (bourbon maple pancakes, anyone?) and boast a half-mile “sugar trail” that meanders through the farm’s sugar bush. During the festival, the trail is dotted with “period encampments,” demonstrating how early Americans went sugaring: “Pioneers actually made maple syrup to get sugar,” explains Tim Burton. “The more you reduce the syrup, the higher the sugar level. Eventually you get solid sugar. And that was our nation’s source of sugar from the earliest times.” Remember the maple sugar cakes Pa brought Laura and Mary in Little House in the Big Woods? Of course you do.

For a festival based solely around one tasty breakfast condiment, the National Maple Syrup Festival has outdone itself: Visitors can tour a working sugar bush operation and learn how to collect sap the old-fashioned way. The bravest among you can try honing your skills on a bucksaw, or you can just wander about and watch demonstrations of old-timey pursuits like blacksmithing, creating a smokehouse, butter churning, wood carving, and wool spinning. The second weekend features The Old West Players, a reenactment group that adds some shoot-’em-up cowboy fun to the mix, and there are always live music performances and roving historical characters.

The festival doesn’t shy away from zany carnival-style displays, either: look for Old McMaple’s Petting Zoo (complete with goat carts), the “Man Eating Chicken,” and other oddities. Finally, don’t forget to bring your appetite: Plenty of maple syrup-inspired victuals are available, such as maple BBQ pork chops, maple baked beans, and of course, stacks of buttermilk pancakes. March 3 & 4 and 10 & 11, nationalmaplesyrup festival.com

Hocking Hills
Hocking Hills State Park, one of Ohio’s most gorgeous natural settings, is just a few hours east of Cincinnati. The drive there is loaded with quaint country settings, and the final destination is a nature-lover’s paradise full of all-season walks, hikes, climbs, and views. One of the park’s many free annual activities is the popular Maple Sugaring in the Hills weekend in March. Meet up at the Naturalist Cabin and discover the journey that maple syrup makes from sap to short stack. You’ll also learn the history of the sugaring processes used by early Native Americans, pioneers, settlers, and modern folks. Park Naturalist Pat Quackenbush demonstrates how to make Snow Drop maple syrup candies (it’s as low-tech as it gets: You just drop the hot syrup onto snow or ice to create a hard taffy), as well as a maple syrup-coated popcorn treat. Don’t forget to try some syrup on your tour, or for a more satisfying sample, the Dining Lodge hosts a pancake breakfast each morning featuring syrup from the surrounding hills. And while you’re in the neighborhood, pop over to Old Man’s Cave (so named for a Civil War–era hermit who resided there) or hike the Cedar Falls trail, which passes valleys, a waterfall, and an impressively steep gorge. Too tuckered (or full) to drive home? Make a weekend of it at one of the park’s many cabins and cottages. March 10 & 11, ohiostateparks.org

Geauga County Maple Festival
Nothing says snowbelt like maple syrup. About 30 miles east of Cleveland, right in the path of that notorious lake-effect snow, is the maple-crazed city of Chardon. Home of the annual Geauga County Maple Festival, now in its 83rd year, charming Chardon bills itself as one of Ohio’s top maple syrup producers. The old-timey town closes out the maple syrup season each year with their April festival, held on historic Chardon Square to highlight the area’s longstanding sugaring heritage. The festival takes over the town with a grand parade, an arts and crafts show, a lumberjack invitational (complete with axe-throwing and block-chopping categories), a “sap run” (one- or five-mile footraces), baking and pancake-eating contests, and the obligatory tree-tapping demonstrations and pancake breakfasts. And to commemorate each season, Chardon trots out a Maple Festival Queen, Prince, and Princess to represent the festival to the syrup-loving world at large. Sweet, indeed.  April 26–29, maplefestival.com

Originally published in the March 2012 issue