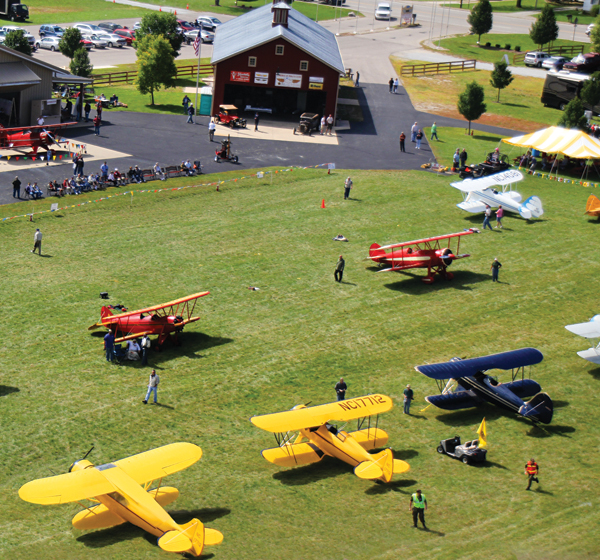 If you haven’t visited a rails-to-trails project, then you’re missing out on one of our country’s great conservation success stories. The Rails-to-Trails Conservancy has been a moving force in transforming some 20,000 miles of disused rail line into paths for cycling, walking, and even horseback riding, and there are dozens of trails in Ohio alone. Cincinnati may someday get its own rails-to-trails recreational path—the controversial Wasson Way Project—but in the meantime, we recommend a jaunt on one of these established trails.

Great Miami River Trail
The Great Miami River Trail meanders along the eponymous river through heavily wooded areas, open fields, and small towns. The best section of the trail is the 63 continuous miles from Franklin to Piqua. There is plenty to see along the way, especially for avid transportation historians (read: plane geeks). Just north of Dayton is the small town of Troy, home to WACO Airfield, an historic airplane factory, and WACO Air Museum, which houses a stash of vintage planes and displays. You can also see a bit of Miami and Erie Canal history while you’re at it: Right off the path sits a stone culvert (that’s a fancy term for a big drain pipe), which was built in 1837 as part of the storied waterway.

With plenty of attractions and places to stay in Dayton, making a weekend trip along the trail is easy. A must-see destination is Carillon Park, which immerses visitors in Dayton’s aviation history and houses the original 1905 Wright Flyer III. The Great Miami River Trail ends in Piqua, with its Hotel Fort Piqua, an enormous 1891 building with a sandstone exterior festooned by intricate gargoyle carvings.

Prairie Grass Trail
Clark County’s Prairie Grass Trail is a 29-mile section of the Ohio to Erie Trail, an ambitious plan to link rail-to-trail segments from downtown Cincinnati to Lake Erie. Heading south from the trailhead in London, Ohio, Prairie Grass cuts through vast farm fields filled with corn and soybeans. It’s a comparatively easy ride, but prepare for heavy sun exposure—this trail offers very little tree cover.
Get some relief in South Charleston’s tiny museum, which displays historic memorabilia from the town in an 1879 train station. Once you hit mile marker 29 in Xenia, calling it a day is an option. But the adventurous can continue riding on three different trails: The Creekside Trail runs 15 miles to Dayton, the Little Miami Scenic Trail goes north 10 miles to the quirky town of Yellow Springs, and the Xenia-Jamestown Connector is 11 miles to Jamestown, which passes Skydive Greene County. Don’t forget to look up; you may see some folks flying through the air.

Holmes County Trail
Get away from it all (or most of it, anyway) on this rural trail that goes deep into the heart of Ohio’s charming Amish country. Claiming to be the first trail in the nation built to accommodate horse-drawn buggies, the Holmes County Trail starts in Fredericksburg and finishes 15 miles south in Killbuck. This section of the Ohio to Erie Trail runs right through Millersburg, an historic Amish town. Stop off and visit the Victorian House Museum, a 28-room Queen Anne–style home that is on the National Register of Historic Places. The museum houses a large collection of Victoriana as well as a catalog of the Amish community’s rich history in Holmes County. The trail continues south through heavily wooded areas where riders can travel alongside horse-drawn buggies. Just make sure not to spook the horses.

Cardinal Greenways
Indiana’s largest rails-to-trail path runs 62 miles north from Richmond to Marion and is a section of the American Discovery Trail, a 6,000-mile, coast-to-coast cycling highway. Start northwest of Cincinnati in Richmond and journey through the small towns of Economy and Webster before reaching Muncie, the home of Ball State University. Muncie provides a good midpoint on this longer trek; refuel at The Island Muncie, a unique tropical-style eatery just off the greenway that serves up fruit smoothies and ice cream. Continue north through the Indiana countryside and stop over in Marion, birthplace of Hollywood icon James Dean and Garfield creator Jim Davis (you can even see a few larger-than-life Garfield statues in downtown Marion). After reaching the end of the Cardinal Greenways, finish up with a short three-mile trek on the Sweetser Switch Trail. There, in a hilarious juxtaposition of old and new, you’ll find another Garfield statue situated next to a retired train car. Celebrate your ambitious ride by posing for a photo with that famously lazy (and fat) cat.