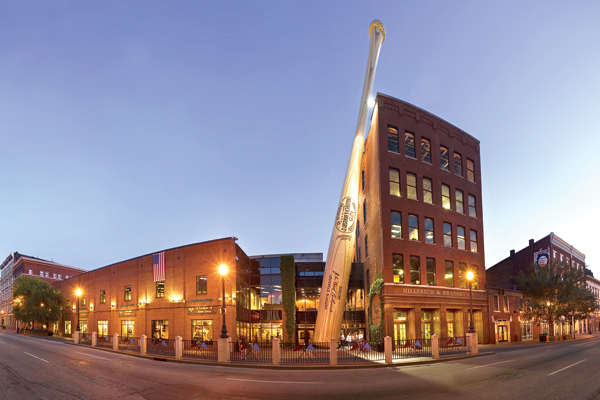 Everybody likes to take a peek behind the scenes. Popular TV shows like How It’s Made on the Science Channel and Unwrapped with Marc Summers on the Food Network allow viewers a virtual glimpse of how their favorite products and foodstuffs are made. To get you off your couch and out the door this summer, we’ve found four nearby factories where you can get up close and personal with some iconic products—including the Airstream trailer and the Louisville slugger—all presented without commercial interruption.

Airstream
Wally Byam’s inventive design for a silver bullet camper is just as popular today as it was in the 1930s. Tom Hanks, Brad Pitt, and Denzel Washington are just a few of this brand’s more famous owners, and they’re not the only ones who are fans. The Airstreamer’s Club—a fan club for Airstream owners looking for “friendship, camaraderie, and the ultimate camping experience”—claims members from across the continent. Even if you’re not a super-fan, a trip to the Jackson Center, Ohio, plant will show you how a steel base becomes a trailer. Offered Monday through Thursday during production at 2 p.m. (Friday tours take place after production), the free, 90-minute trek allows visitors a glimpse of the hands-on process that results in an Airstream. Instead of using an assembly line to move the items as each step is completed, workers push the trailers to each station. Although the water test, which ensures there are no leaks, is neat, a peek inside the finished product is the highlight of the trip. Before you head home, grab a bite to eat at Café Verandah (205 W. Pike St., 937-596-6161). The 1888 Victorian home-turned-restaurant is just a quarter-mile from the plant and focuses on using locally farmed ingredients. Their lunch menu (served Tuesday through Friday from 11 a.m. to 3 p.m.) offers a variety of homey dishes, including quiche of the day, eggplant Parmesan, and the Verandah burger. 419 West Pike St., Jackson Center, (937) 596-6111, airstream.com

Anthony-Thomas Candy Company
A tour of Anthony-Thomas Candy  is the perfect escape for die-hard chocolate fans. Over four generations, Anthony-Thomas Candy has expanded to become one of the largest family-owned candy businesses in the Midwest, named after the father and son who started the family business with a lunch counter that served ice cream. Pony up $2 ($1 for those under 18) and you’ll be off on the 45-minute tour, offered twice daily on Tuesdays and Thursdays (9:30 and 2:30). Visitors survey the chocolate-making and candy-coating process from a glass catwalk suspended over the factory floor. Large copper kettles used for cooking, larger chocolate holding tanks, and silver transfer pipes will have you feeling like you’ve stepped into a scene from Willy Wonka & the Chocolate Factory. More than 25,000 pounds of chocolate, including cherry cordials, turtles, and officially licensed OSU buckeyes, are packaged and processed during a single shift. If all that leaves your mouth watering, don’t worry. Conveniently for you, the tour ends in the retail store. 1777 Arlingate Lane, Columbus, (877) 226-3921, anthony-thomas.com

Louisville Slugger Museum & Factory
With baseball season in full swing, now is the perfect time for a visit to the Louisville Slugger Museum and Factory. In addition to watching those famous bats being made, you’ll learn more about the game itself. Visitors can wield the same models baseball Hall of Famers used and view bats that once belonged to Babe Ruth, Joe DiMaggio, Derek Jeter, and other stars of the game. From now until August 12, Ballparks: From Classic Cathedrals to Concrete Donuts pairs photographs of baseball stadiums by Jim Dow with artifacts from those ballparks to give you a sense of the history of the game and the variety of parks it’s played in. Then travel to the production floor where 2,500 full-size bats are produced daily. Each visitor receives a miniature bat at the end of the tour. Don’t worry about getting lost in downtown Louisville—just look for the gigantic bat. The world’s largest bat, a replica of Babe Ruth’s 34-inch slugger, stands 120 feet tall and leans near the right side of the red brick museum. 800 West Main St., Louisville, (502)
588-7228, sluggermuseum.org

Toyota Motor Manufacturing Kentucky
The largest Toyota plant in the U.S.—turning out more than 500,000 vehicles a year—is just an hour south of Cincinnati on I-75. Toyota Motor Manufacturing builds Camrys (both regular and hybrid), Venza crossovers, and Avalon sedans in this 24-year-old facility. A short video hits the highlights of company and plant history, then you’ll board a tram for the free 50-minute tour, given three times a day (10 a.m., noon, and 2 p.m.) Monday through Friday. You’ll start in the stamping area, where huge rolls of steel first take on automotive shape, and cover parts of the 7.5-million-square-foot factory (equivalent to 156 football fields), ending up on the assembly line. You’ll see how everything comes together—but don’t try to take any photos; cameras are not allowed on the tour. Some things have to stay secret. 1001 Cherry Blossom Way, Georgetown, (800) 866-4485, toyotageorgetown.com

Originally published in the June 2012 issue