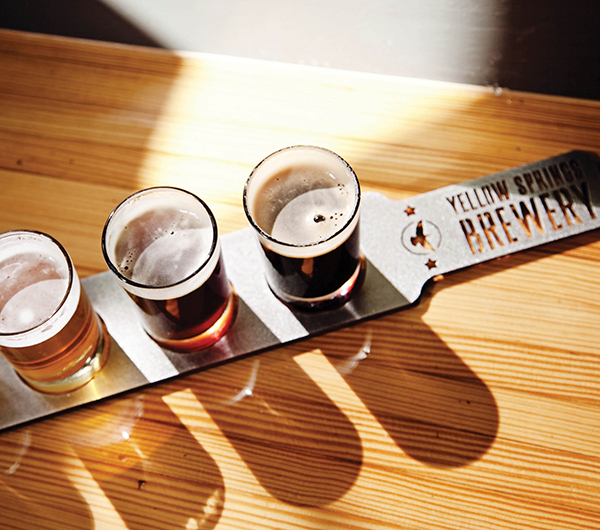 Through the Woods
Follow the Little Miami Scenic Trail 65 miles north from the Newtown trailhead, and on the left you’ll find Yellow Springs Brewery—the first in its namesake village. Co-owner Nate Cornett arrived by way of Cincinnati, too. As a home brewer, Cornett volunteered at Rivertown Brewing Company in Lockland, where he met fellow Dayton native Jeffrey McElfresh, who is now head brewer at the trailside suds-works. Exposed ductwork, concrete floors, and a corrugated metal bar lend the tap room an industrial vibe, while works by local artists represent the community’s rich arts scene. Out the back door, a roomy deck invites you to linger a little longer and lures trail-goers in for a pint.

Beers range from full-bodied dark ales to in-your-face IPAs to subtle wheats. Try the bestselling Captain Stardust Saison, or the Smokin’ Handsome American Smoked Brown Ale, silver medal winner at the 2013 Great American Beer Festival. Mobile eateries park out front on weekends so you can soak up the suds with some food truck grub.

Be the Brewer
When The Brew Kettle opened in Strongsville (near Cleveland) in 1995, it was Ohio’s first brew-on-premise microbrewery, meaning you can do more than drink their brews—you can be the brewer. For $130–$160 plus packaging costs, The Brew Kettle invites home brewing addicts and first-timers alike  to DIY a fresh batch of beer, choosing from more than 70 tried-and-true recipes. One session yields 72 bomber (22 oz.) bottles, or the experts can keg it for you free of charge.

If you’d rather leave that process to the pros and focus on partaking, head straight to the tap room and smokehouse next door.  Sample some of The Brew Kettle’s own ales and lagers while you snack on the smoked wings. Spiced to perfection and devilishly succulent, choose the original dry rubbed and you won’t need a drip of sauce. Or keep it all local and order the yellow perch caught fresh from Lake Erie.

Before heading home, take a short detour. Fat Head’s Brewery, which took major honors at the 2013 Great American Beer Festival, has a saloon less than 15 minutes up the road. If you want to know what gold tastes like, just order the Imperial IPA Hop JuJu, their first-place Imperial IPA.

Urban Exploration
Some blocks north of downtown Columbus, in historic Italian Village, Seventh Son Brewing Company operates out of a former auto garage. Head brewer Colin Vent works in one wing of the boomerang-shaped building, and his brews are poured fresh in the other, an urban craft beer bar that serves exclusively Ohio-made beers. Soaring glass garage doors let in plenty of natural light and open to transform the bar into an open-air drinkery on nice days.

Vent’s philosophy on beer is simple: explore. The beers here are fearless mash-ups of ingredients. Take the self-titled flagship beer, Seventh Son American Strong Ale, which Vent describes as an amalgamation of different brewing cultures. English ale yeast, American hops, and Belgian candi sugars come together for a brew that has an intense floral aroma teetering on bitter, but goes down smooth and balanced.

Don’t forget to save room for dessert—liquid dessert. Just a half-mile away in the Short North district is Brothers Drake Meadery, makers of honey wine crafted in the ancient tradition with local wildflower honey.