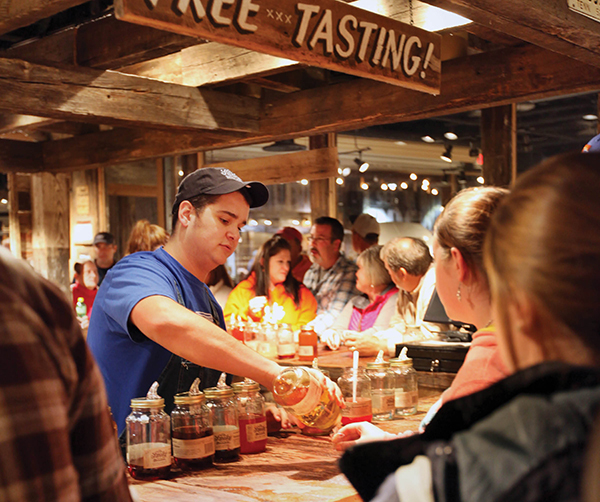 1. Flavor Country
It takes a good sense of ironic detachment (or, we suspect, unfettered earnestness) to claim the origin story for beer cheese. Welcome to Clark County, Kentucky. Local lore has it that one Joe Allman invented the stuff in the 1940s for his cousin’s restaurant, the Driftwood Inn. Delightfully, the condiment was then called Joe’s Snappy Cheese. Cut to last October, when the folks in Winchester, Kentucky (90 minutes south from Cincinnati), decided to celebrate their cheesy heritage by launching the Beer Cheese Trail, comprised of five local restaurants offering up their version of the pub favorite: Hall’s On the River has a beer cheese burger, a spread, and a soup; Engine House Deli offers a beer cheese chili hot dog and brat. Along the trail, patrons can order the beer cheese of their choice and get a stamp on something called a Cheese Log card. When people receive all five stamps and return their card to the Winchester-Clark County Tourism Commission, they get a free official T-shirt that reads “I conquered the beer cheese trail.” So far, 17 people have crushed the trail, with about 100 still vying for that coveted prize. (Thankfully, it doesn’t have to be completed all in one visit.) And on June 14, the hilarity comes full circle when Winchester hosts the sixth annual Beer Cheese Festival.
Beer Cheese Trail: beercheesetrail.com, Beer Cheese Fest: beercheesefestival.com

2. Pop, Fizz, Clink
While you’re in Winchester, stop by the Ale-8-One bottling plant. The crisp citrus-ginger soda sold in distinctive green bottles and cans is a cult favorite (and the only soda invented in the Commonwealth that’s still manufactured there). The free plant tour gives visitors the history of the drink (it began its life in 1926), a peek at the production line (imagine the Laverne & Shirley opening credits), and a complimentary bottle of Ale-8 to send you home happy. Confoundingly, the gift shop doesn’t sell the stuff (you can pick it up at Party Source or on Ale-8’s website), but souvenirs like Ale-8 salsa, barbecue sauce, hats, and suckers are on hand. Tours are usually given on Thursday and Friday mornings by appointment only, so call (859) 744-3484 or e-mail the plant to schedule one.
Ale-8-One: ale8one.com

3. Camptown, USA
Gatlinburg is one of the most visited spots in the country, so the once-bucolic hamlet takes touristy camp to the extreme (ahem, Ripley’s Believe It or Not!, Guinness World Records Museum, and so on). But there are still some authentic experiences to be had in the land of endless mini-golf: Started in 2010 by moonshiner Joe Baker, Ole Smoky Tennessee Moonshine Distillery in downtown Gatlinburg produces 12 varieties of moonshine, otherwise known as “straight hooch.” Visitors can sample all 12 for free, including fruity combinations like the dangerously tasty apple pie (40 proof), made with apple juice and cinnamon; even stronger varietals like White Lightnin’ (100 proof); and Ole Smoky Original (also 100 proof), created with 80 percent local corn and the remaining 20 percent with some boozy secret ingredient. And make sure to sample a few Ole Smoky moonshine-soaked maraschino cherries. The distillery sets up live bluegrass music (complete with rocking chairs for the guests) and a self-guided tour so visitors can learn about the honorable history of moonshine.
Before you hit the hooch, start your day at the Pancake Pantry, which offers one of the best breakfasts in town. Opened in 1995, the “pantry” resembles a 1960s Old World-style chalet. Choose from omelettes, waffles, bacon, and 24 kinds of crepes and pancakes. Because really, there’s no better way to begin a weekend of campy fun than with a stack of pancakes.
Ole Smoky Tennessee Moonshine Distillery: olesmokymoonshine.com, Pancake Pantry: pancakepantry.com