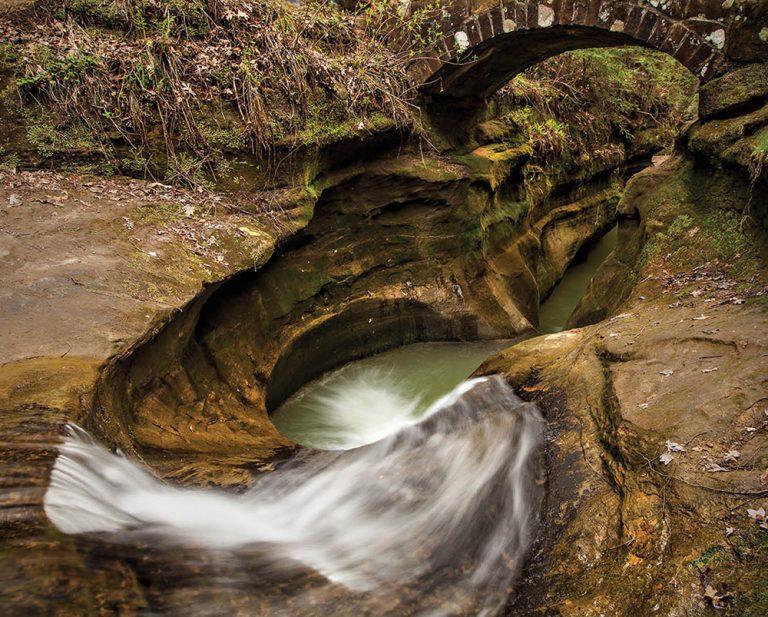 When you need to disconnect, head for the hills. Cell reception in Hocking Hills is spotty at best, forcing you to go analog and get lost in prehistoric forests and small towns. The craggy typography also makes for epic foliage-admiring, and there’s no shortage at Hocking Hills State Park (where you’ll find Devil’s Bathtub, above) and adjacent Hocking State Forest. The region is ragged with “black hand” sandstone 345 million years in the making, named not for the rock’s color (it’s actually tan, or stained red by iron), but for a black handprint inscription discovered by early settlers in a gorge.

Trek through the park, taking in cliffs, waterfalls, gorges, and caves aplenty: Ash Cave, the park’s largest recessed cave; Old Man’s Cave, where fabled hermit Richard Rowe lived out his life; and Cantwell Cliffs, with a difficult-bordering-on-dangerous rim trail that rewards ambitious hikers with sweeping views. Get the full lay of the land on a guided hike with the park’s only full-time naturalist, Pat Quackenbush, also a longtime ghost hunter who leads haunted night hikes. At Hocking Hills Canopy Tours, navigate the terrain on off-road Segways, or soar above the trees on the SuperZip tour. After being double harnessed and rolled up like a human burrito, you’re launched headfirst from 85 feet up, plunging over a cliff and the Hocking River. If the kids tire of the woods, take a free factory tour at The Columbus Washboard Company or find 3,450 little distractions at the Paul A. Johnson Pencil Sharpener Museum, both in Logan.

In neighboring Wayne National Forest, more sandstone forms the walkable, 39-foot-high Irish Run Natural Bridge, while below the forest floor the world’s largest mine fire, lit near New Straitsville in 1884 by striking coal miners, still smolders. As the story goes, the smoke helped bootleggers conceal stills, making the town a moonshine mecca during Prohibition. Today, you can get legal hooch at Straitsville Special Moonshine Distillery.

Night Moves
Rough it in one of Hocking Hills State Park’s electric campsites and cottages (parks.ohiodnr.gov/hockinghills); go glamping at the Inn & Spa at Cedar Falls (innatcedarfalls.com); or spread out at Cedar Grove Lodging (cedargrovelodging.com).