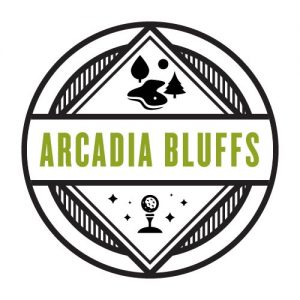 Yes, it’s got devilishly shifty winds to contend with; 3,100 feet of spectacular shoreline hovering majestically above Lake Michigan; 50 very scary sod-walled bunkers, some big enough to swallow entire barns, let alone a puny golf ball; and more than four miles of undulating linksland to traverse. But what I’ll remember best is the mist. We were standing on the ninth tee when it rolled in off the lake, completely shrouding us in white. All we knew was that there was a pin out there, somewhere, about 160 yards across a ravine. “It’s like hitting into an abyss,” I told my friend Jason.  Of course, one man’s abyss is another man’s landing pad. I ended up with a double bogie. He made a birdie.

Arcadia Bluffs looks as if it was hand-carved by giants. The fairways don’t so much announce themselves as sneak up on you. There are precipices and treacherous slopes and pocket bunkers galore, and sometimes it seems like the green is only a mirage. But have faith. Like Whistling Straits (on the opposite side of the lake), or Bandon Dunes and Chambers Bay (clear across the country), this is one of the premier links courses on the continent. If you play golf, you owe it to yourself to make the hajj to this peaceful, bucolic corner of northern Michigan, for your own private session with the golf gods. Just don’t expect much mercy. (800) 494-8666, arcadiabluffs.com