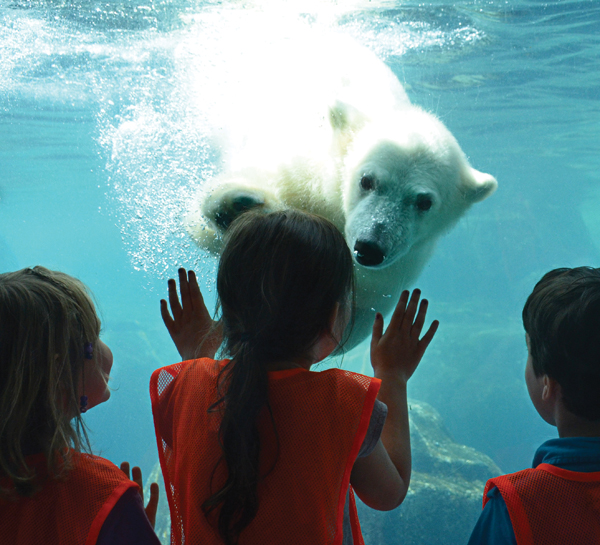 We love our Cincinnati Zoo. But every once in a while, it’s nice to get out of town, pet someone else’s stingray, and get a whiff of someone else’s elephant house. If you’re up for an adventure, try one of these four regional zoos. From marsupials to dinosaurs (huh?), they’ve got it all.

Louisville Zoo
What does NCIS the television series have to do with the Louisville Zoo? Just ask the zebras. After a much-publicized naming contest, the Louisville Zoo’s baby zebra finally has a name: Ziva, taken from the Israeli-officer-turned-NCIS-agent character. The name fits, especially since Ziva’s dad was christened Gibbs after the show’s protagonist. (Why do so many Louisvillians have such a jones for NCIS? We have no idea.)

The Louisville Zoo is just over an hour and a half down I-71 and definitely worthy of a day trip, especially with the opening of the Steller’s Sea Eagle aviary. The zoo owns two of the rare eastern Russian raptors—Piotr and Anna—whose wingspans can grow to an alarming eight feet. The aviary is the final piece in the award-winning Glacier Run exhibit, a zoo highlight with opportunities to meet cold-weather creatures like polar bears and grizzlies. While at the zoo, check out the more than 1,700 animals, stroll through the Gorilla Forest, and feed the birds at Lorikeet Landing. Plan your trip for September 7 to join the Wild Walk in support of threatened and endangered species.

Columbus Zoo and Aquarium
Usually zoos aim to offer their patrons a taste of the wild with species from around the globe. Rarely, however, do they bring creatures back from the dead. The Columbus Zoo stands a head above the rest with the opening of Dinosaur Island, which involves a water taxi adventure amongst the once-extinct species.

The zoo is just a two-hour cruise up I-71, but with the Zoombezi Bay waterpark and Safari Golf club, there’s enough to keep you busy for a few days. Pet a stingray in the recently opened 18,000-gallon saltwater Stingray Bay exhibit, watch the Discovery Reef diver feed the tropical fish, or take a seat for the Animals on Safari show and witness everything from dogs jumping rope to kangaroos inflating tires.

Visit on September 21 and 22 to celebrate Jungle Jack’s 35th Hanna-versary at the Fall Fest, and see the man himself live on Safari Stage.

Toledo Zoo
What’s more adorable than a polar bear cub? How about two? Zip up I-75 to the Toledo Zoo to see the twin polar bear cubs, Suka and Sakari, who are sweet enough to star in a Coca-Cola commercial. The twins are housed in the zoo’s award- winning Arctic Encounter exhibit, along with their mother, Crystal. If that’s not enough cuteness for you, then head to Tembo Trail to view the twin African spotted-necked otter pups or the white-cheeked gibbon baby at Primate Forest.

If you’ve ever wondered about wallabies or questioned the true dangers of dingoes, check out the zoo’s new exhibit, Wild Walkabout: Wonders from Down Under. Don’t miss Baru, North America’s largest saltwater crocodile, and have a look at Australia’s colorful coast in the Great Barrier Reef exhibit.

Indianapolis Zoo
Picasso, Rembrandt, and da Vinci are fine. But when is the last time you saw a painting by a walrus? A two hour drive west on I-74 will land you at the Indianapolis Zoo, where visitors can pay extra to participate in the Animal Art Adventure and take home a personalized painting created by a dolphin, elephant, penguin, or pinniped (that is, a sea lion, seal, or walrus).

To get a little more personal, dive into the Dolphin In-Water Adventure and learn dolphin hand signals with their trainers. If swimming with marine mammals isn’t exciting enough, step on up to the nation’s largest shark touch pool, which hosts a school of dog sharks and offers the chance to pet and view them up close. For a change of pace, take a stroll through the exquisite White River Gardens, a 3.3-acre plot festooned with hundreds of plant varieties. Visit on September 15 for the Hispanic Heritage Fiesta and win prizes, swing at a piñata, eat empañadas, and go on a scavenger hunt for Latin American animals.