Home News History What’s The Story Behind The Big Indian Sign at Paddock and Vine? 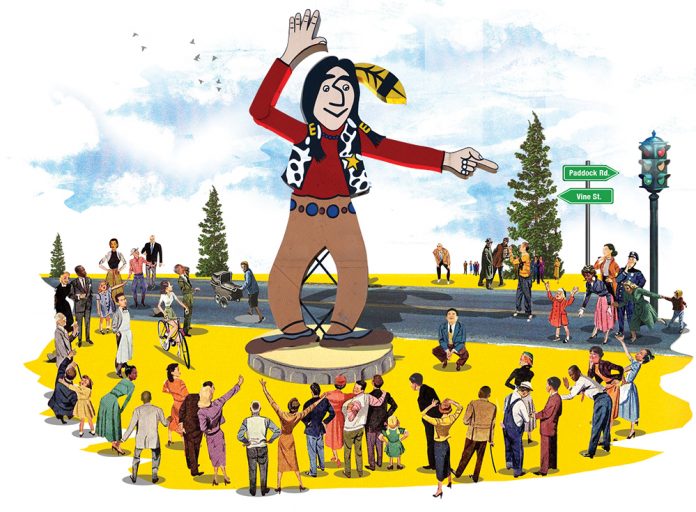 Complete this sentence: “Where Paddock meets Vine, at the ______________.” If you need more than a split second to conjure the answer, please turn in your Cincinnati citizenship card immediately.

“Big Indian Sign.” For more than 60 years, it has stood as a kind of Walmart greeter to the neighborhood of Carthage. Its landlord has changed repeatedly, its surroundings radically. Multiple attempts to have it removed on account of ethnic insult have failed. Its raised arm, originally waving to startled passersby, was stilled long ago by safety regulations. No one can remember exactly when it stopped, or when the sign’s neon outline was removed. Quite a few questions, in fact, remain about this famous Carthage icon. I appointed myself to find those answers, passionately determined to avoid the more important responsibilities on my calendar. I found, literally, twice as much as I went looking for, but at the same time, nothing at all.

The Big Indian Sign first entered my life in the mid-1970s, when I moved to Cincinnati and saw that infamous TV commercial for Cherokee Motors. If you were here then, you will instantly nod your head and roll your eyes: A rather obviously Jewish guy in a feathered headdress, speaking in that stiff Tonto accent—Cher-oh-kee Moh-tohrs—inviting you to save big wampum “where Paddock meets Vine at the Big Indian Sign.” As first impressions go, I wasn’t terribly shocked; I had already experienced my first few Paul Dixon shows.

Who actually designed and built the sign? Some say General Motors provided such adornments to dealers nationwide, which seems sensible enough until you see the Pontiac logo of the era: a formal, stylized image of Chief Pontiac, a real historical figure. Our sign looks nothing like that. Only Cincinnati has this smiling, waving, sun-blocking brake-slammer. One of a kind. Well, except for the other one.

Oh. Perhaps I should have dropped that piece of information more delicately. Carthage residents who treasure the sign as their “unique landmark” may want to sit down for this: There’s another one. It’s almost 1,500 miles from here, roughly the same age, and identical in almost every way. Upon discovering this, I had to know: Are the two signs connected? Do their origins converge? I get distracted by such things. Chasing this kind of rabbit helps keep me from watching too much cable news.

The Cincinnati sign, I soon discovered, was commissioned by Walter E. Schott, an extremely wealthy local businessman. His son Charles married Marge—yup, that Marge—but that’s a story you don’t need from me. Walter owned Sky Pontiac in College Hill, where another son, Walter Jr., ran daily operations, and in 1954 he leased the property in Carthage for resale of Sky Pontiac’s trade-in vehicles. Carthage was a relatively distant suburb back then, but everyone who ventured there certainly had no trouble finding the new Sky Pontiac: Where Paddock meets Vine, at the—Dear God! What in the living hell is THAT thing?

All credit for that thing’s existence—or blame—falls upon the town of Billings, Montana. That’s where Walter Jr. went in 1952 when his dad bought an auto supply company and a radio station. At some point he visited a local nightclub, and there he beheld a 48-foot-tall, arm-waving behemoth of a sign—not an Indian, but a white guy with a pompadour. The guy’s name glowed in neon: Bob Porter’s Elmo Club. Later, knowing that his pending Carthage dealership was surrounded by several competitors, the younger Schott remembered the blazing attention-grabber. Cincinnati was about to get its own version of Bob Porter.

I did find an old clipping that included the owner’s philosophy behind such a costly investment: “It’s on a heavily traveled street, and there has to be something to grab the attention of the speeding public. You only have one crack at a customer.”

Walter E. Schott Jr. could have said that. But he didn’t. Those were the views of O.B. Jackson, owner of the Chief Diner in Durango, Colorado. Jackson had the same lofty dream as Walter: to bedazzle the eyes of passersby into stopping. His Big Indian Sign, a dead ringer for Cincinnati’s, went up in 1957 and also still stands today, as much a beloved historical landmark as the one in Carthage. Decades of rehab and repainting have made the two signs less similar, but it’s still obvious: their Indian and our Indian must be related. They share the same bow-legged stance, the same arm positions, angled head feather, braids, vestments, and the same rare metal design. There’s gotta be a connection.

To avoid confusion as we continue our investigation, I will now assign each Indian its own name: Let’s call the Cincinnati sign “CC” (Carthage Car), and the Durango sign “DD” (Durango Diner).

DD was a fitting addition to the Chief Diner, a Native American–themed restaurant inside and out. The Durango locals I spoke with all expressed fond childhood memories of the diner’s sign and their famous pancakes. It thrived for decades, but times and tastes changed, and the restaurant was demolished in 1981. DD, though, was rescued. Durango businessman Jackson Clark, mirroring Cincinnati’s sentiment for CC, bought DD and gave it a second life outside his Pepsi-Cola bottling franchise. The Indian theme didn’t make as much sense there, so he fitted the upraised hand with a 55-gallon drum painted as a giant Pepsi can. Problem solved. A few years later Clark moved DD again, sans Pepsi can, to another of his businesses. It’s still there today, at the Toh-Atin Art Gallery on West Ninth Street, which specializes in Native American rugs, jewelry, pottery, and crafts. It’s a more appropriate fit, although it inspires no famous slogan like CC did. “Where West Ninth Street meets Narrow Gauge Avenue at the Big Indian Sign,” doesn’t roll off the tongue.

I had no trouble verifying the recent history of DD, but the further back I searched, the more the trail faded. I uncovered no information about its design or manufacture. With no documentation or oral histories about where DD came from, I have nothing to prove or disprove a connection with CC.

Though there is one clue. Victor Kraus, a Cincinnati civil engineer for General Electric, was part of the construction team that built CC. His design resolved the worry over dangling an 850-pound motorized arm above a parking lot of for-sale cars. Kraus’s, son Terry, now living in New Orleans, revealed a tantalizing dimension to his father’s career: Victor’s engineering prowess earned him a high-level security clearance with the United States Department of Defense. Which explains why Victor occasionally disappeared for long periods when Terry was growing up. Where did he go? To the Cold War beat-those-Russkies hush-hush regions around Colorado, New Mexico, Utah, and Arizona. And where is Durango? Roughly 70 miles as the crow flies from where the Four Corners meet. Bingo!

Bottom line: I can’t prove squat. But anything is possible—except maybe the nuke. A second Indian sign could have been made by any of the involved players (“Hey, as long as we’re going to all this trouble…”), and then a customer found for it later. Or Victor Kraus, during time off from analyzing flying saucers in Los Alamos, could have made a friend in Durango and sold him a copy of his Cincinnati project. Or anybody could have simply taken a photo at Paddock and Vine and stolen the idea.

I am, however, convinced of this: The second sign could not possibly have been made by anyone who had not seen the first. There are simply too many similarities to explain away. I may never learn exactly how CC figured into the making of DD, but I will always be certain that it somehow did.

While we’re here, I’d be remiss not to mention one more trait the signs have in common: occasional complaints from those who view them as racist caricatures. In Durango, where the younger Jackson Clark now runs the Toh-Atin Gallery, his response is straightforward: His entire business—employees, vendors, and customers—depends on a good relationship with the area’s large community of Native Americans. Overwhelmingly, according to him, they love DD. Older residents remember that the Chief Diner always treated them respectfully during a time when that wasn’t a sure thing. And stop me if you’ve heard this, but they also consider the sign a historic landmark they want to keep around.

Cincinnati’s moral relationship with the ethnicity of CC has more baggage. The sign’s early years accompanied a string of now-blatantly embarrassing newspaper copy: “We’re on the warpath against high prices!” “Come in and smoke peace pipe!” “We no scalp-um!” “No Indian giving!” And then there were those unforgivable Cherokee Motors commercials. Their impact was so indelible that many wrongly assume it’s the only dealership that’s ever been at that address, despite it having gone out of business more than 30 years ago. No subsequent dealerships made similarly offensive ads, but there are those who still consider CC an insult and sporadically complain to the sign’s current owners at MotorTime Auto Sales. Efforts to have the sign taken down get started now and then, but never manage to gain momentum. The sign’s popularity as a piece of local history is widespread and has always won out.

I, on the other hand, lost. I invested a lot of effort looking for a connection between the two signs, and never found one. An answer would have at least, if only slightly, justified my endeavor. I don’t even have that. I did discover, in Durango, a delightful everybody-knows-everybody-since-grade-school community, one that appreciates its local history on a level much deeper than a big old sign. Carthage, despite its turnover in residents, still has much of that as well. So the next time you drive by where Paddock meets Vine, wave. CC no longer waves back, but maybe he will again someday. That motor could still be in there.