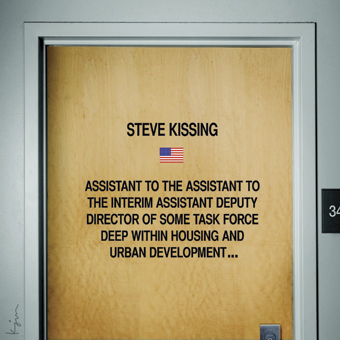 As I write this column in mid-September, I already know that by the time Election Day arrives, I will have formally ended my independent campaign for the Presidency of the United States of America. Having raised less than $700, and secured firm commitments from fewer than an estimated 275 voters, it’s best that I bow out gracefully. So, by the time you read these words, my presidential campaign will have come to an end with a whimper, or rather a small thud—one created by a stack of campaign flyers being dropped into the recycling bin. That’s a long way from deafening applause from throngs of admirers on Inauguration Day.

I can at least walk away from the presidential race with a modicum of pride. My campaign lasted longer than that of some political stalwarts, such as John Edwards and Rudy Giuliani, to name just two. Nor did I stoop, as Romney did, to public pleading for the veep nod. How unbecoming. Though, I must say, it’s too bad for me that he didn’t grovel effectively. That would have kept Governor Palin from stealing my thunder as the novelty candidate who came from nowhere. To offset Palin’s media-stealing popularity, one of my campaign advisers suggested that I borrow a page from her political playbook and field dress a moose, or something more parochial, such as an opossum, on Fountain Square. I actually considered it, until I recalled that I nearly retch every time I gut a fish I’ve caught. Besides, a dead animal is apt to attract more votes than I could. Just think how many frustrated Americans would savor the opportunity to write-in “Mr. Opossum” as a sign of their disdain for our broken political system. And let’s be brutally frank about it: a campaign can’t get any lower than the realization that an animal carcass stands a better chance at victory. Now I know how Dennis Kucinich must feel.

Maybe all is not lost. Perhaps the next president will someday get wind of my ill-fated though good-intentioned campaign and see in me someone who loves this country dearly, and who happens to have one or two intriguing ideas. That could lead to some prominent, or not-so-prominent, political appointment. As nice as a cabinet position or ambassadorship would be, I would, if called upon, settle for Assistant to the Assistant to the Interim Assistant Deputy Director of Some Task Force Deep Within Housing and Urban Development. Country first, right?

Am I surprised that my campaign wasn’t successful? No, of course not; winning was never really the main point anyway. But that doesn’t keep me from fantasizing about what could have been had this dark horse found some way to come from 30 (OK, 120) lengths behind down the homestretch. Helping fuel this fantasy was the San Antonio Current. They ran an article about several independent candidates, and the supporting graphic was a photo illustration of me standing at the presidential podium. In the photo, I’m wearing a long-sleeved black T-shirt upon which is silk-screened a red, white, and blue skull and bones, crossed by two assault rifles with daisies in the barrels. For me, that image is a nod toward how a Kissing presidency, for better or for worse, would have shaken things up and provided some food for thought. I would have made the most of those all-so-critical first 100 days in office—when Americans are inclined to give their new president a bit more rope than usual—to implement some of my larger and bolder initiatives. I had some plans, man. Some damn good plans.

For instance, I would have “repurposed” NASA for the next 10 to 20 years. Instead of all those physics, science, and math nerds focused on traveling to Mars, I would have put them to work concocting ways to help us break our addiction to oil, and to slow down, if not reverse, the effects of global warming. We need the brightest minds in this country focused on next-generation solar and wind power, as well as hydrogen and other renewable, nonpolluting fuels. A trip to Mars and back—if we’re lucky—sure sounds like a lot of fun for the half-dozen or so astronauts (or chimps) who get to go, but we need something more all-inclusive to rally around, something all Americans can enjoy together.

Hear now, my fellow Americans, this modest proposal: It’s time we replace National Arbor Day with National Bowling Day. What in God’s creation do we need Arbor Day for? Yes, yes, trees are mighty important. They’re pretty. They provide oxygen. They absorb greenhouse gases. They provide us all that is woody. But I think everyone who has made it past fourth grade gets that. So rather than a day devoted to the obvious, how about a day devoted to bowling? Imagine the many benefits we could reap if on a given day every citizen went bowling at an alley, an arcade, or digitally through gaming devices like the Wii. It’s nearly impossible to take much seriously when you’re bowling, especially if you’re also drinking. In addition, most U.S. citizens can’t bowl, and even among those who can, few look good doing it. To even things out, anyone who owns his or her own ball would be required to bowl barefoot and with a ball twice the normal weight. A National Bowling Day would help build a stronger sense of national identity, reminding everyone that if we don’t cooperate and sacrifice together, we are doomed.

Career politicians seem especially adept at messing with our lives through excessive taxes and morality-driven legislation, while they embezzle funds and tap dance in public restrooms. It’s time we turn their world upside down. With every bit of cooperation and assistance from the American people that I could muster, I would have also rewritten the rule books on national politics. Sixteen years would be the longest anyone could hold a Congressional office. Every meeting a politician has with a lobbyist or a special interest group would have to be videotaped and posted online within 24 hours for all to see. Upon retirement from national politics, politicians would be barred from lobbying our government for the remainder of their lives. I would have also lit a fire under the collective rump of Congress by taking a cue from John Edwards, demanding that we create a national healthcare system in which every member of Congress—and their families—would be required to participate.

Hey, it’s a tough world. And it’s getting tougher thanks to, among others, Islamic extremists. But again, I had a plan. Among my top priorities would have been to insist that every American high school student take at least two years of Islamic studies. I would have also instituted a robust and high-profile student exchange program between Americans and those more amenable Islamic nations. Just think how a few games of Twister among their high school students and ours could break down barriers.

RUNNING FOR PRESIDENT is something every American should try at least once. It’s not easy, and it gives you a new appreciation for anyone willing to put him- or herself in the hot seat on cable news programs and Sunday morning talk shows—or even, um, the presidency.

Once a political nobody like me tells people he’s running for president, there is an initial (and very understandable) you-must-be-pulling-my-leg phase. Most people chuckle and don’t even wait around for a punch line. But others perk right up, as if to say “you better not be messing with me,” and pose a policy question. So you learn quickly to articulate your point of view on any major issue within 30 seconds. And then you have to be ready to debate it when the voter in question has a different opinion than yours. This forces you to be more thoughtful about your own positions, and it helps you realize how entrenched most people are on the big issues.

I recently struck up a conversation with a woman while at New York’s LaGuardia Airport. “Hi, my name is Steve Kissing. I’m from Ohio and I’m running for president.”

“Well, thank you,” I said, handing her a piece of campaign literature. “A regular Joe in the White House could go a long way to improving our country, don’t you think?”

“It depends on the Joe, I guess, but you seem like a nice guy.”

“I am, and I have some bold ideas about how to gain our energy independence.”

“Oh, I don’t care about that. I’m banking on us finding a sea of oil under Manhattan.”

“Teaching standards. I work at a nonprofit that serves kids and they seem to be getting dumber by the day. I blame the parents and the teachers.”

“Well, I want to raise teacher pay significantly, and I want to institute a peer-review process that can fairly yet efficiently weed out and replace ineffective teachers within five years.”

“You think you can get that past the teachers’ unions?” she asked, with a clear look of disbelief, as if I just told her I could fly. “I don’t think so.”

“Nothing ventured, nothing gained, right?”

“Well, I’d love to see you try.” She glanced at my handout again, smiled, and walked away, leaving me to wonder what sort of sway I might have over the Department of Education if I was appointed to serve as the Assistant to the Assistant to the Interim Assistant Deputy Director at HUD? At least I’d be closer to the center of power than I am now. Either way, remember this, people: When everything starts to fall apart after McCain or Obama takes office, don’t come crying to me. I’m going bowling.

Illustration by Kevin Miyazaki
Originally published in the November 2008 issue