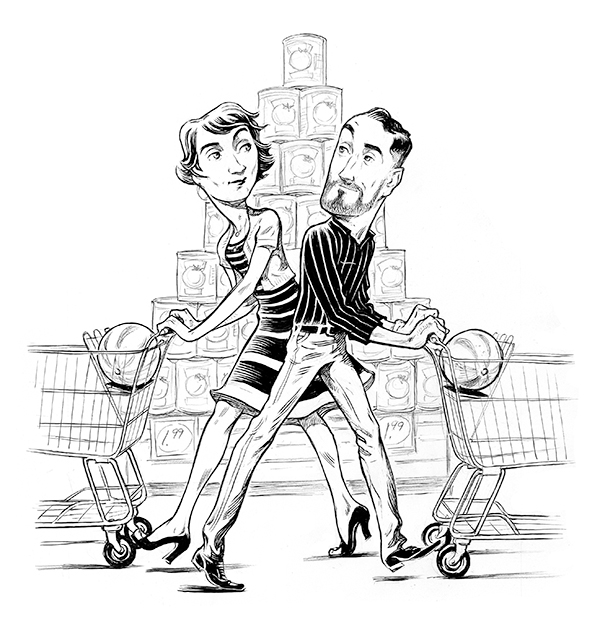 Please, please, either confirm or debunk the stubborn rumor that the Hyde Park Kroger has an unofficial Singles Night every Thursday, and that a melon displayed in a shopping cart signals to others that you are a participant. Is this for real?
—Honey, Do

Dear Honey:
Your question is disturbing on many levels. If this rumor were to be confirmed, our magazine could be held responsible for a collapse in sales of all those put-back melons, now that we know where they’ve been. And only Hyde Park, really? Should we not at the very least also expect the Kroger near Madeira to be in the Blue Book?

A quick check of the always-reliable Internet does reveal a popular belief that an informal singles market occurs weekly at the Hyde Park Kroger. Thursdays are mentioned often, but every other day of the week is also claimed as the magic night.

Exhibiting a rare instance of investigative motivation, the Doctor decided to don his gumshoes, race to the scene and case the joint. On a Thursday. Here is what he found: not one shopping cart carrying a melon, and not one employee with certain knowledge of the ritual. Yes, they had heard various legends, and yes, in past years the store had actively promoted certain events to attract single people. But no employee knew of any secret gathering of The Order of the Melon. File this rumor along with the one about alligators in New York City sewers. However, maybe that’s exactly what single people want you to think.

What the hell happened to Columbia Township? It is literally in a dozen small pieces, strewn from Norwood to Camp Dennison. Some islands, like where I live, are barely one square block. My trash pickup day is different from the house next door! Did Columbia Township step on a land mine sometime back? —Takin’ It to The Streets

Dear Streets:
It was many times worse than a land mine. It was a government bureaucracy. Remember the blood-soaked finale in Braveheart where Mel Gibson is torn to pieces? Now imagine that scene lasting for 200 years and add a room full of portly bureaucrats with a pile of maps. Welcome to Columbia Township.

The settlement of Columbia (slightly predating Cincinnati’s) began as the largest municipal landmass in Ohio. As late as the early 1890s it encompassed Norwood, Hyde Park, Oakley, Fairfax, Tusculum, Madisonville, Pleasant Ridge, Kennedy Heights, Silverton, Kenwood, Madeira, Mariemont, Terrace Park, and beyond. What happened? Sadly, while historical records include cold asterisks and footnotes (“Madisonville was annexed to Cincinnati in 1911”), the human dramas behind these land grabs have been lost. Was there some Montague-Capulet feud that sparked the Mt. Washington Secession of 1911? A tearfully-whispered “We’ll always have Oakley” in 1913? We’ll never know. Some areas (Norwood, Mariemont, Terrace Park, etc.) did bravely declare their independence by dressing as Proctoids and tossing crates of Folgers into the Little Miami.

A small consolation is suggested by an unscientific sampling of residents of today’s Columbia Township, who proclaim a high satisfaction with services for trash, snow removal, and street maintenance. One doubts whether a poll of Cincinnati residents would produce similar results. ¡Viva Columbia!

I confess: I am an east side Cincinnatian who views a visit to the west side as a mysterious adventure in a foreign country. I’m afraid to ask the natives there about an expression I overheard at one of those countless church festivals: “Three for a dollar on a ham.” What? Please assure me that this does not refer to animal sacrifice. —West Would

Dear Would:
The fact that your attitude is one of deference rather than derision beams a tiny ray of hope from the perpetual Hatfield-McCoy darkness that is Cincinnati’s bipolar geographical disorder. The Doctor thanks you.

Rest assured that the saying to which you refer is utterly innocent. It is, in fact, a financial opportunity wrapped inside a potential windfall: church festivals have raffles, a common raffle prize is a large ham, and raffle tickets for said ham can be purchased in bulk at a discount, such as three tickets for only one dollar. Voilà! Three for a dollar on a ham. So relax. An animal has indeed been sacrificed, but only within the acceptable norms of what might be displayed in a shopping cart at your neighborhood Kroger (see above).