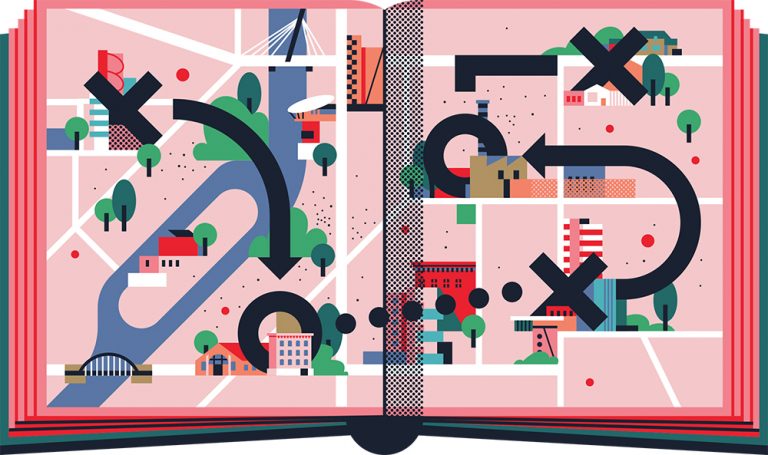 An architect and a journalist-turned-community-planner walk into a room. OK, it’s not a room, but a gaggle of people and bikes ready for a slow ride around Covington to scout potential routes for new bicycle infrastructure. Or it’s the sidewalk in front of a Memphis diner with a whiteboard and some questions about what people want to see in the neighborhood. This type of conversation generally takes place at community meetings in the back rooms of rec centers, requiring people to come there, feet (or wheels) far from being on the ground. And then it’s radio silence before anything—if anything—ever comes to fruition. Not, however, when Kevin Wright and Joe Nickol are in charge. Which they are, at their new firm Yard & Company.

Previously, Wright was executive director of the Walnut Hills Redevelopment Foundation, Nickol a senior urban design and development advisor at MKSK in Covington. Each had approached his job in an atypical fashion, finding the conventional systems broken. Wright’s spearheading the redevelopment of Peebles’ Corner? Yeah, that wasn’t something a market study was swooning about; it was a neighborhood and a redevelopment nonprofit clawing to make it happen.

Before they launched Yard & Company in April, Wright and Nickol collaborated on the Neighborhood Playbook. A People’s Liberty-funded chapbook written for “developers and everyone else,” it was created as a field guide for activating empty spaces and creating economic growth in a way that feels true to a particular place—as Wright and Nickol had done to help bring the previously empty Five Points space to life in Walnut Hills. The Playbook’s birth was something out of Parks & Rec, with a solid dose of Leslie Knope—6 a.m. Sunday meetings, an overabundance of words and ideas, a knack for banter—but the book caught real traction. From book orders came speaking engagements, then cities and neighborhoods around the country asking them, Hey, could we hire you to…? From there, it was building a business so they could answer Yes.

Yard & Company’s approach is all about demand discovery, antithetical to the development industry’s prevailing supply-side philosophy. That is: “Build the demand market, versus build [a building] and there will be a market,” says Wright. Or, per Nickol, “It’s the people side versus the bricks-and-sticks side.”

The other unique (and brave) thing about their business model: Clients hire them on a subscription basis, with no up-front contract. “If we solve a problem three months earlier than we thought, then unsubscribe,” Wright says. “The subscription model admits that we are going to discover things together, we’re going to learn together, and we’re going to come across threats and opportunities that we didn’t see coming together.” The scale of subscriptions, too, allows small communities with small budgets and big problems to hire them.

It also lets them become part of major plans, like the Uptown initiative in Memphis. Andrew Murray, the Memphis Community Redevelopment Agency’s director of planning and community development, says, “We have $95 million [of TIF funding] to spend over the next 14 years. How do we take that and leverage it for a lot more? And how do we start small and then scale up rapidly? It’s really a trick to be able to pull that off. Even if you and I know it’s a great neighborhood, getting a lender to say Yeah, I’ll totally fund that coffee shop is a hard sell. So you start smaller, and once you prove the concept you go get your investor”—a.k.a., you work the Yard & Company model. “They want to make sure they do it with the maximum amount of impact,” says Nickol.

Growth has become synonymous with “scary change,” he says, explaining that developers usually fixate on building a specific project (the supply-side approach) that disrupts community stability “in a cataclysmic way.” Meanwhile, communities looking for investment “just want it on their own terms and in ways that look and feel like they do. So a big part of our ethos is Let’s figure out together how to do that.” And the best way to attract win-win development, they say, is to avoid top-down mandates. “The demand discovery process is about getting people out in their neighborhood, shaping and literally building what they want,” says Wright. “We think one of the problems is that developers invite them to a table, listen to them, and then go off and do whatever and expect them to like whatever comes out of the ground two or three years later. I don’t think that’s equitable.”