Home News When Is A Brothel Not A Brothel? Madam Bennett Escapes The Law

Everybody in Cincinnati knew Kate Bennett ran a brothel at 297 Elm. Her building was a fine, three-story brick building on the west side of the street between Eighth Street and Ninth Street. George T. Harrison, an attorney who lived just around the corner on Eighth Street, testified about Madam Bennett’s clientele:

During the 1879 Harry Baldwin murder investigation, Bennett was arrested on suspicion that Baldwin was shot inside her house, possibly by one of her “inmates.” Consequently, it was no surprise when Hamilton County Prosecutor Samuel H. Drew got an indictment on 26 March 1879 charging Kate Bennett with keeping a “house of ill fame.” 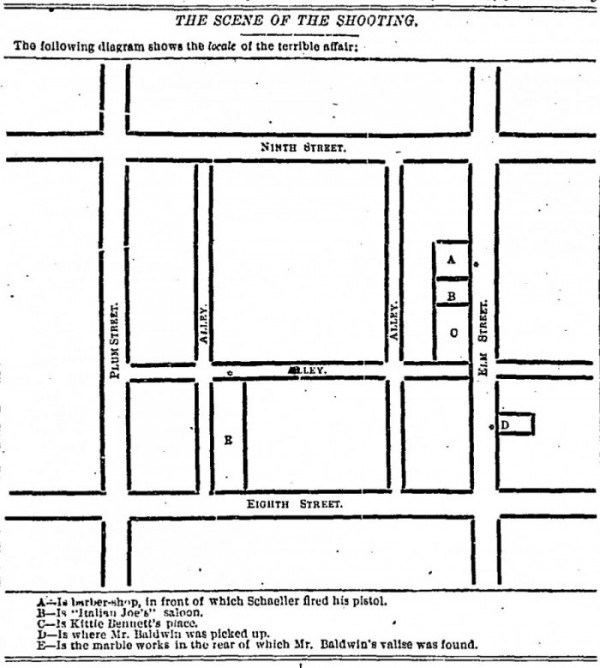 The case came to trial that September, which was unusual in those days. It was common for the city police to “pull” a handful of houses and arrest the madam and her girls. (Cynical reporters suggested this happened when the city coffers ran low.) In such cases, prostitutes were usually charged with loitering and fined between $5 and $25. Madams faced charges of “keeping a disorderly house” or “harboring lewd women” and fined about $100. Invariably, the madams paid up, calculating it as the cost of doing business. In 1879, “Miss Kitty” opted to fight the system. According to the Cincinnati Enquirer [27 September 1879]:

“The other women chose to plead guilty and pay their fines. Not so with ‘Miss Kitty.’ Although a little woman, she is a plucky one, and she determined to face the grim terror—the law, not the Judge—to throw herself, as it were, upon her countrymen, a jury of her peers, and see whether or not they could find it in their hearts to find her guilty.”

Testimony was strongly against Madam Bennett. Like Mr. Harrison, above, several witnesses echoed the same theme:

“Dr. John Davis was also examined and testified that he saw persons going into the house and hacks standing before the door. He saw well dressed men, people apparently respectable, go hurriedly and stealthily into the side door of the defendant’s house on frequent occasions, and knew by the manner they went in it was a house of prostitution.”

It was no surprise then, that Kate Bennett was found guilty. Her attorney, Thomas B. Paxton, motioned for a stay of judgment, and Judge Fayette Smith agreed to hear testimony.

The next week, Attorney Paxton argued that only one statute covered the offense for which Kate Bennett was indicted. That state law declared that a house or building “resorted to” as a house of prostitution was a public nuisance and the responsible party might be fined and sentenced to jail.

As Paxton indicated to Judge Smith, the wording of that statute incorporated a quite specific turn of phrase. The law, Paxton asserted, required that the house or building must be “resorted to for the purposes of prostitution or lewdness.” Prosecutor Drew’s indictment did not include the phrase “resorted to,” Paxton said, and therefore was invalid. Judge Smith agreed that this was no legal trifle. According to the Enquirer [4 Oct 1879], the judge said the phrase was essential:

“The general role of law as to pleadings under a statute undoubtedly is that the indictment should set forth enough of the language to inform the party under what section of the statute the indictment was framed, and, although it is best to use the exact language of the statute, yet that is not always necessary.  . . . It seems, therefore, that the expression ‘resorted to for the purposes of prostitution or lewdness’ is an essential part of the description of the crime.”

The indictment employed no such language and, guilty or not, Kate Bennett walked out of court a free woman.

The reaction of her Elm Street neighbors might best be summarized by a letter to the Cincinnati Gazette [6 October 1879] signed by “Junius,” which questioned the competency of the prosecutor:

Maybe Prosecutor Drew flubbed the case. Maybe something else was at work. When Kate Bennett, whose legal name appears to have been Helen K. Smith, died in 1910, the Cincinnati Enquirer [14 April 1910] suggested that Madam Bennett may have had “protection”: