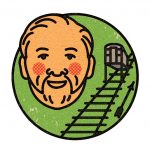 The Price family was strongly anti-alcohol. The hill was called Buttermilk Mountain because buttermilk was the hardest drink served up top at Price Hill House. Eventually the city’s mushrooming German population forced a change, and it became a beer parlor.

In 1906, there was a big accident. Joe Strassell probably didn’t think much about the cable that would transport his two horses and wagon of manure up the steep slope. He also didn’t know the original cable had never been replaced and was nearly rusted through. About six feet from the top he felt the platform lurch and saw the severed cable lash back and forth across the tracks. The platform sped crazily down the hill. It halted before hitting the bottom, but Strassell somersaulted out of his seat [into] his load of manure. He became an instant celebrity. He was refreshed at a saloon, given a derby hat, and for many years was kidded about coming out smelling like a rose.