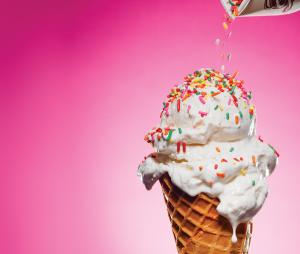 Imagine an Indiana farm boy stirring milk, cream, and sugar in a metal pail, battling a summer’s day in Over-the-Rhine. The year is 1870. His concoction—ice cream—lives for just an instant. Making the stuff—stirring it into existence—is hard enough, but the real challenge is smiling at the city dwellers who pass his homemade stand in favor of more familiar treats. To keep the pail cool he has invested good money in salt and ice, and yet he’s careful to hide his anxiety. Would-be customers are not swayed by anxious salesmen. And today, they are not swayed by him. Not by his hoarse, high-pitched cries of “Ice cream! Ice cream!” Not even by the oysters he keeps on ice because, after all the money he spent, he might as well use it for cooling something other than this expensive novelty treat that requires no end of sweat and elbow grease to make.
The exact details have been lost to history, but sometime in the 1900s, across town at the Old Arcade on Vine street, a 16-year-old Greek immigrant from Sparta wanders among the shops and saloons. He came to this river city to make his fortune. His father died only months ago. Now he is the man of the family. Across an ocean he can still feel them, like the sun on his shoulders. They are depending on him to strike out on the right path. If he is quiet and still, perhaps his father will speak to him. In the meantime, the Spartan is hungry. But not for a meal. He wants something cold, something refreshing. Not beer—too heavy. Tea? Yes, but…no, the line is too long. No more lines. There’s only one vendor without a  line. Two boys about his age—brothers?—man the station. The older barks, “Ice cream! Get your ice cream!”; the younger does all the work. A sugary coolness drifts from the metal pail that the youngster stirs. What’s in that pail? The Spartan approaches, asking, “How much?”
The Indiana farm boy is Louis Charles Graeter. The Greek is Thomas Aglamesis. Probably it was never their intention to make Cincinnati famous for ice cream, and yet that’s exactly what they did. In 2002, the most well-known woman on earth, Oprah Winfrey, declared her love for Graeter’s on national TV. The next day, orders of Graeter’s increased from 40 to 400 per day. The ice cream parlor that the Aglamesis brothers opened in Norwood in 1908 pioneered home delivery of ice cream and for a time employed the fastest horses in the city. Their Oakley store remains virtually unchanged and their ice cream and candy has been appreciated by The New York Times, the Chicago Tribune, Bon Appétit, and Chocolatier.
What’s the secret of their success? The Graeter family still makes ice cream the old fashioned way, with fresh cream and egg custard, gently swirled along the chilled sides of a slowly spinning French pot freezer. And the Aglamesis mission statement is still to make their chocolates and ice cream “the Sincere Way”—in small batches using pure cane sugar, fresh cream, vanilla extract, and other premium ingredients, according to a century-old recipe. It’s possible, as the old curse goes, that Cincinnati is 20 years behind the times. But when it comes to the way our ice cream is made, that’s exactly the right place to be.