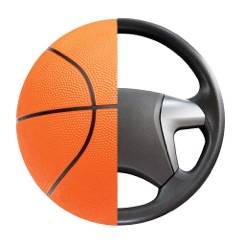 By day, 6-foot-10, 270-pound Matt Stainbrook is the starting center for the Xavier Musketeers men’s basketball team. By night, he’s an Uber driver. The big man discusses life in the paint and behind the wheel of his 2004 Buick Rendezvous.

His final stretch on the court at XU:
“I’ve started to reflect, and it’s been a whirlwind. My goal is to go out on a high note. I want to win the Big East Conference regular season or the Big East Tournament. If you can win one of those, you’ll be feeling good going into the NCAA Tournament.”

His funniest moment as an Uber driver:
“I picked up these ladies [who were] about to go out. One is walking to my car—it wasn’t raining or icy—but slipped and twisted her ankle. She sat on the ground for five minutes. I’m like, ‘OK, shake it off a little bit and just get in the car.’ Three nights ago, I picked her up again.”