Hollywood has come to Cincinnati. If you’ve been downtown lately, you may have noticed set lights in front of the Stock Yards Bank, trailers at the Dixie Terminal Buildings, or even cameras near the Clay Wade Bailey Bridge and Arnold’s Bar and Grill.

It’s all for a new film, Marauders, staring Bruce Willis, Dave Bautista, Adrian Grenier, of Entourage fame, and Christoper Meloni, from Law & Order: SVU. Marauders follows a group of bank robbers pursued by FBI agents (Meloni and Grenier). However, the plot becomes more complicated when the agents realize there’s an ulterior motive behind the group’s robberies and murders.

This isn’t the first film to shoot in Cincinnati (Rain Man, Elizabethtown, The Ides of March, and Carol, just to name a few), but it’s still a rare treat to experience movie magic in the Queen City. Even better, director Steven C. Miller has announced that the action won’t just be shot in town; the story will take place in Cincinnati as well.

Marauders will be in Cincinnati until mid-October, and during the next two weeks, there will be numerous opportunities to sneak a peak of the stars, watch some filming, and get a cool story to share with your friends. Some Cincinnatians, including fans at last Wednesday’s Reds game, already have snapped selfies with members of the cast.

The best way to spot an actor is to hang around near the production’s “basecamp,” where all the equipment, actors’ trailers, and logistical services of filmmaking are stored. Because filming sites are generally too cramped to hold all of this essential gear, basecamps are usually set up in empty lots, parking structures, or church lots, putting cast and crew just short van ride away from the filming location.

Finding the basecamp is pretty easy. For starters, there will be bright yellow roadside signs that will have “basecamp” written on them, pointing an arrow in the proper direction. If you’re really lucky, there will be other signs pointing “to set” as well. Since professional film shoots have so many people to coordinate, often in unfamiliar locations, this low-tech, idiot-proof system has been developed to succeed where GPS and verbal directions can fail. Getting everyone to the location on time is critical—even a minor delay costs the production a huge amount of money. 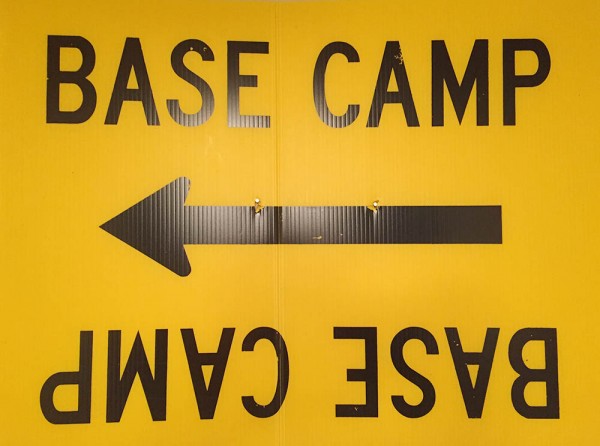 A photographer once told me a simple rule for snooping around sets—don’t be creepy. You usually don’t get to go inside the basecamp, and you most definitely don’t get to bother busy crewmembers or interrupt filming. From a respectful distance, watch, take pictures, and enjoy the magic. If a crewmember or security guard asks you to move, do what they say. Not only will being stubborn ruin the fun for others, it might get you arrested—sometimes the set guards are police officers.

Don’t be afraid to politely chat with crew members when they don’t seem busy. By presenting yourself as respectful fan who just wants to watch from public areas, you never know what doors can be unlocked. I’ve had several great conversations with location managers, grips, and production assistants about their work and have learned quite a few insider tidbits about shows and movies. People working in cinema love what they do and are often excited to share that wonder with everyone.

Take a look at some of Director Steven C. Miller’s Instagram shots of the project:

This before landing. #epic

Who wants to rob a bank?