Home News Profiles Read an Excerpt from Love Wins: The Lovers and Lawyers Who Fought... 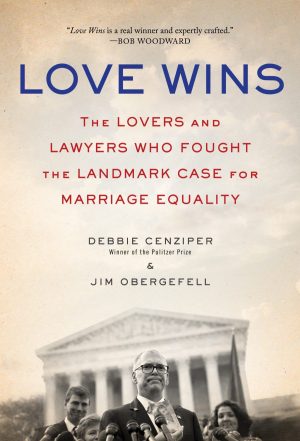 The following is an excerpt from Love Wins: The Lovers and Lawyers Who Fought the Landmark Case for Marriage Equality, written by Debbie Cenziper and Jim Obergefell, published (and available for purchase) by William Morrow/HarperCollins. Cenziper is a Pulitzer Prize-winning journalist from The Washington Post, and Obergefell, of course, is the Cincinnatian whose fight to be named as the surviving spouse on his husband’s death certificate led to the Supreme Court’s 2015 decision in Obergefell v. Hodges, guaranteeing the right to marriage for same-sex couples. Read our feature on Obergefell from our June 2015 issue and meet the two authors this Saturday, June 18, at the main branch of the Public Library of Cincinnati and Hamilton County. The event is hosted by Joseph-Beth Booksellers.

Soon it would be time for good-bye. His husband was dying, and with a gentle knock on the bedroom door long past midnight, it would come now, quickly. But Jim Obergefell, married for five days, didn’t want to think about a funeral, not on this bright July morning when Cincinnati was in the throes of summer and his husband, John, was sitting up in bed because the spasms that coursed from his hips to his toes had mercifully subsided.

John Arthur couldn’t wear a wedding ring. The weight of it hurt his fingers. He was naked under an electric blanket because clothing made his skin burn. His voice, what was left of it, had become winded and hoarse, a labored delivery of syllables and sounds that required great concentration and long, shallow breaths. Jim had to bend low to hear him, endlessly struck that a man who’d once had such a deep and lyrical laugh could now produce only a whisper. But for five days, John had pushed out a single, perfect word.

Disease had struck suddenly, just after John’s 45th birthday two years earlier, when his left foot started dragging as if a ten-pound weight was bearing down on his shoe and everything they knew shifted and splintered. The diagnosis of ALS had been a death sentence: the neurological disorder attacks the nerve cells in the brain and spinal cord, eventually robbing every muscle in the body of movement, including the diaphragm, which facilitates air flow to the lungs. Amyotrophic lateral sclerosis literally suffocates its victims to death.

Jim glanced at John in the bedroom they’d once shared, painted pale yellow and dominated by a hospital bed that compressed and expanded beneath John’s weight. Jim had moved to the guest room, but already this morning he had spent several hours in a chair by John’s bedside, watching the news on a television set loud enough to overcome the constant whoosh of an oxygen generator that pumped air through a line looping over John’s ears and up into his nostrils. The bedroom faced east, and Jim had opened the window blinds so John could feel the sun.

On this day, they were expecting a visitor.

Jim was nervous about meeting a civil rights lawyer who had spent the better part of thirty years suing the City of Cincinnati, but when Al Gerhardstein rapped on the door of their downtown condominium just after two p.m., his smile was benign and his graying sideburns were slightly disheveled, as if he had just come in from a run. He adjusted his wire-rimmed glasses, and when he shook Jim’s hand, the embrace was firm and friendly.

Al followed Jim down the length of the hall to the bedroom, where John was propped up on pillows, waiting. Dropping his briefcase to the floor, Al barely glanced at the hulking hospital bed. His younger sister, one of six Gerhardstein siblings, was paralyzed by multiple sclerosis, and on Saturday mornings, Al sipped coffee by her bedside until her caregiver arrived.

He leaned forward and rested a light hand on John’s shoulder. And then he said, “Tell me about your wedding.”

“Saying ‘I thee wed’ was the most beautiful moment of my life,” Jim said, looking at John, whose frail frame was hidden beneath the blanket, and remembering the lanky, grinning man with a mop of blond hair.

They had spent more than twenty years together in Cincinnati, spread across the hills and low ridges of the Ohio Valley, but had never felt compelled to marry because Ohio had banned same-sex marriage and the federal government didn’t recognize the state-sanctioned marriages of gay couples anyway. But three weeks earlier, the U.S. Supreme Court had delivered an important win to the gay community, finding that same-sex couples married under state law deserved all the federal benefits that came with it, spanning health care, Social Security, veterans’ assistance, housing, taxes. So Jim and John had traveled to Maryland to marry, each mile in a private plane fixed with medical equipment wearing on John’s fragile body.

“He suffered,” Jim told Al. “It’s frustrating and hurtful to know that the person you love went through terrible pain and discomfort just to do something millions of others take for granted.”

“I wanted us to be treated the same,” John said slowly, each word a struggle. “And I want Jim to be legally taken care of after I die.”

Al listened without taking notes. Once, twenty years earlier, when he had been in his early forties juggling three children and a shoestring law practice that operated on contingency, the voters of Cincinnati had changed the city’s charter, permanently banning all laws that would protect the gay community from discrimination in areas like housing and employment. To Al, it was an arbitrary and hateful provision, and he sued in federal court. He spent nearly five years working without pay, and when the case was done, he questioned the city, the courts, and the application of law. He thought about shuttering his practice and taking up teaching, moving his family from Cincinnati.

He wasn’t sure if he would ever take on another major gay rights case, but then United States v. Windsor on June 26 had struck down a key provision of the Defense of Marriage Act, which for more than fifteen years defined marriage solely as a union between one man and one woman. The law, Supreme Court justice Anthony Kennedy wrote in the opinion overturning it, told gay couples “that their otherwise valid marriages are unworthy of federal recognition.”

Over late nights in a dusty office overlooking a bus stop and the federal courthouse, a poster of Rosa Parks in the lobby and hate mail tacked to a bulletin board in the kitchen, Al studied Ohio’s ban on same-sex marriage, passed by a majority of voters in 2004. He discovered a striking inconsistency.

Ohio prohibited first cousins and minors from marrying, but would recognize the marriages if they were performed in another state. The “place of celebration” rule came from a long-standing legal principle known as lex loci contractus, the Latin term for “law of the place where the contract is made.” But Ohio didn’t apply that principle equally: out-of-state marriages among same-sex couples were excluded. If the federal government after the Windsor decision had to recognize same-sex marriages on an equal basis with heterosexual marriages, Al thought, shouldn’t states like Ohio have to recognize them, too?

The finding seemed entirely existential until a mutual friend told Al about John, Jim, and their marriage in Maryland. On a hunch, Al hurried to his filing cabinet and dug out a death certificate saved from an old lawsuit. He scanned the document from the Ohio Department of Health and immediately found what he was looking for. “This is it,” he whispered, and three days later, he went to meet John and Jim.

When Jim got up for water, Al followed him into the dining room and pulled out the death certificate. “I’m sure you haven’t thought about this, because who thinks about a death certificate when you’ve just gotten married.”

Al pointed to Section 10: Marital Status. Al pointed to Section 11: Surviving Spouse. Jim had never studied a death certificate before, and he followedAl’s fingers across the page. In Ohio, Al explained, their marriage did not exist. John would be classified as single when he died, and the box where Jim expected to be named as the surviving spouse would be left blank. In death, they would be strangers.

“John’s last official record as a person will be wrong,” Al said gently.

Jim’s head started hurting as he thought about John, who had traveled nearly five hundred miles to marry even though his bones ached and his skin burned. “I can’t believe this,” he said, wiping at tears with the back of his hand. “I just can’t believe this.”

Across the country, lawyers and advocacy groups were focused on a broader mission—delivering same-sex marriage to all fifty states. But Al saw a more narrow, tangible, and urgent need, one that had never been fully explored in an American courtroom. He asked Jim, “Do you want to talk about ways that you can fix this for you and John and make a difference for all gays here in Ohio?”

Jim wasn’t sure if there was room in their lives for a federal lawsuit, but when he walked back down the hall and looked at John, whose wedding ring sat on a nightstand by the bed, there was no longer any question. Jim had no idea where the case might lead or how it would end, but with John’s permission, Jim signed John’s name and then his own to some papers that Al laid out in front of them. Alone in the fading light of the yellow bedroom, Jim and his husband launched the first-ever challenge to Ohio’s ban on the recognition of same-sex marriage, enshrined in the state’s constitution by 3.3 million voters.