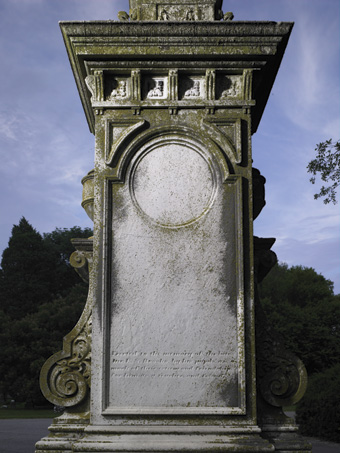 Here lies Boss Cox. Not to mention roughly two dozen Cincinnati mayors. More than 40 Civil War generals are tucked under this velvet sod, along with multiple Supreme Court justices, Postmasters General, and states’ governors. Messrs. Kroger, Fleischmann, Procter, and Gamble were interred here, having given birth to the modern grocery store, yeast packet, and hand soap, respectively. And after 163 years, there is still ample land to peacefully swallow up the lawmakers, merchant princes, and biotech industrialists of the 21st century—whoever they may be.But you don’t have to be powerful to be buried in Spring Grove Cemetery and Arboretum, and you don’t have to be rich or famous, either. You do, however, have to be tasteful.It has to do with the terroir. In the wake of the early-19th century cholera epidemics, the city’s cemeteries were cramped, crowded, and hemmed in by urban growth. Members of the Cincinnati Horticultural Society and a group of prominent citizens—including future Supreme Court Justice Salmon P. Chase—advanced the idea of a cemetery in the countryside with space for expansion, one that would accommodate the deceased in a dignified manner and provide a bucolic setting for visiting mourners. From its first interment in 1845, Spring Grove was a world apart from churchyard burial grounds of its day. It was non-sectarian and genuinely rural—far from what were then the city limits, a place of rolling hills, trees, and gurgling springs. But even as remote as it was, once established, it quickly took on the excesses of early Victoriana. Families fenced their plots and filled the gravesites with markers, cast iron urns, trellises, benches, and other clutter, until the place looked like an Edward Gorey cartoon. It was left to German landscape designer Adolph Strauch to bring Spring Grove into its own.Under Strauch, appointed Spring Grove’s superintendent in 1855, the fussy, fusty funerary customs gave way to his vision of an open, park-like setting of sweeping lawns, winding roads, trees, ponds, lakes, plantings, and romantic vistas. “Excessive ornament” and “capricious strangeness” were frowned upon when families came to decorate graves, and no family, no matter how grand, was permitted to mark its place with a clutch of ill-assorted monuments.Which does not mean that the Great and Powerful are laid to rest under simple headstones. Spring Grove is often called a “museum without walls” because of the extraordinary mausoleums, monuments, and statuary here. And much of that artistry commemorates the lives of those who shaped our city. The stately McAlpin and Pogue markers hug close to the road—of course: you’d expect retailers to understand the value of a high-traffic location—while the graceful, columned temple that holds the Fleischmann family reposes on the edge of a lake, visible but remote, like a distant pavilion in a Pre-Raphaelite painting. Charles West, who founded the Cincinnati Art Museum with a $150,000 gift in 1880, is himself a work of art now—a seated figure on top of the marker that bears his name. Nearby lies philanthropist Andrew Erkenbrecher—first president of Cincinnati Bell, who, in 1872, started the Cincinnati Zoo with a clutch of birds brought over from Europe to eat the local caterpillars. Neither Erkenbrecher himself nor his winged wildlife are depicted on the marker; instead, it holds a bronze figure of a woman in repose, swathed in a Grecian drape, one plump breast exposed. It’s tasteful nudity; Strauch certainly would have approved.
Photograph by Nathan Kirkman
Originally published in the October 2008 issue.