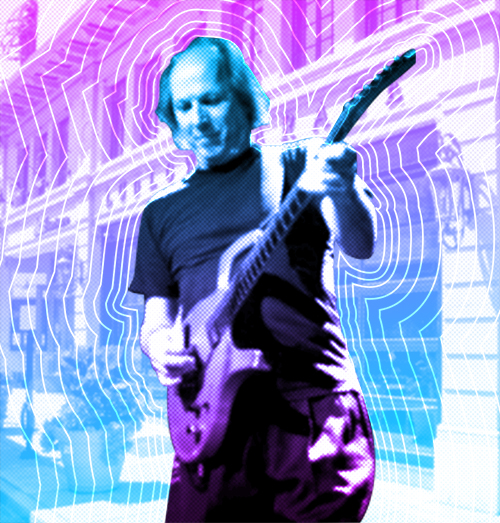 Adrian Belew’s long and winding career as an innovative guitar visionary enters yet another new phase with the pending release of Pop-Sided, the Covington native’s first solo album in 10 years. But don’t think the ever-restless singer-songwriter and prolific session guitarist has been sitting on his hands over that time: he created FLUX, a fascinating iOS app that plays random snatches of his sonic creations; he toured multiple times with the Adrian Belew Power Trio, which featured songs from across his versatile four-decade career; and he continued to contribute singular guitar parts for artists like Nine Inch Nails.

If the album’s title is any indication, expect the new material to be more in line with the Beatles-esque songcraft of his work with The Bears (which also featured Cincinnati-based pyschodots’ trio Chris Arduser, Rob Fetters, and Bob Nyswonger) than the eccentric excursions of his time fronting King Crimson or as a touring guitarist with Frank Zappa and David Bowie. A new Belew-fronted quartet featuring drummer Jordan Perlson, multi-instrumentalist Saul Zonana, and longtime Power Trio bassist Julie Slick stops at the Ludlow Garage on March 9, part of a 26-date U.S. tour in support of Pop-Sided. Belew says to expect “a more complete picture of most things I’ve done. More songs, new songs from the award-winning FLUX app, King Crimson material I haven’t played for years, and a dose of classic Power Trio. It’s my intention to make this the best Adrian Belew show.”

*Note: Adrian Below’s March 9 show at the Ludlow Garage has sold out.