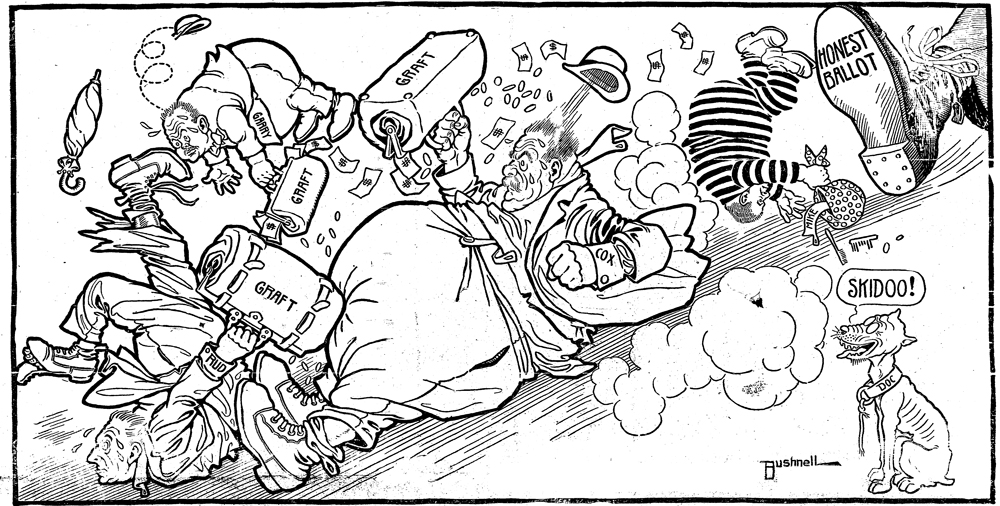 The morning after election night in November 1911, Cincinnatians spread their papers to find that a Blue Wave had swept their city. Democrat wins meant the long-dominant Republican political machine led by one George Barnsdale “Boss” Cox lay in ruins. By the 1880s, political corruption had become rampant, regardless of party, with nominations easily bought and sold. But no one was better at delivering votes than Cox.

His father, an English immigrant, died when he was just a boy. Cox worked as a bootblack, delivery boy, and bartender, then bought his own drinking establishment at Longworth and John, the notorious “Dead Man’s Corner.” He had a powerful, six-foot build and soft-spoken mien. In 1879, as a means of curtailing police raids on his saloon and gambling den, Cox got elected to city council. From there he rose to chairman of the local Republican party. In various capacities, Cox rigged election results and tax rates, managed campaigns, and wove a web of cronyism that made him Cincinnati’s de facto dictator. Need something done? Talk to Cox.

+ Cincinnati Magazine looks at 10 events that set the city on its path to today. See the full list here.

This “bossism” was a nationwide phenomenon that had emerged in response to the sudden growth and attendant chaos of urban life, wrote University of Cincinnati urban historian Zane Miller in Boss Cox’s Cincinnati. Miller links Cox’s original power to the German-American base of the urban core, but as transportation networks shifted industry and residents to the suburbs, interests were split, even among Republicans, which caused some to ally across party lines against the Cox machine.

Fixed ballot boxes fed frustration. Writing in 1905 in his anti-Cox screed Bossism in Cincinnati, Henry C. Wright links popular ire to the riots of 1884. When a lawyer in the Cox-controlled “Republican ring” secured a lax sentence in a murder case, an angry mob burned the courthouse. Scores died and many more were injured in days of riots.

Slowly a reform movement built. Reformist forces were able to paint the Cox camp as decadent, corrupt, and immoral: party to gambling and prostitution. The reformers found a champion in pugilistic young lawyer Henry Thomas Hunt, who claimed to have become an “anti-Cox” man during the city elections of 1903 when he witnessed the votes of Cincinnati blacks being bought for two bucks apiece. In 1905, Hunt was elected to the Ohio House of Representatives as part of a reformist landslide that pushed many of Cox’s men out of office.

Hunt then got himself elected county prosecutor for the express purpose of taking Cox down. He indicted the boss on perjury charges, alleging he’d lied in an earlier case over never having received interest on public funds. Cox avoided conviction, but the taint of scandal dogged him and he announced his retirement from politics.

So it was that in 1911, Hunt bested incumbent Mayor Louis Schwab, over whom the Cox machine held sway. The November 8, 1911 Post front page is telling of both Cox’s reach and the machine’s undoing. “The greatest rebuke to bossism,” it states, had come not in the mayoral race but on the judicial front, where “thoroughly aroused by the conduct of Cox-controlled Judges in the perjury case against Boss Cox,” it ran, “the voters seemingly made special efforts to assert their disapproval.”

The election was also notable in the civic engagement it inspired, notes Miller. In 1911, voter turnout peaked at 88 percent after a slow and steady rise from only about 65 percent in 1889.

While the Cox machine persisted into the 1920s, 1911 marked the beginning of the end. Cox suffered a stroke in 1916 and died of pneumonia shortly after. But his rule left its mark on city politics. It was because of bossism that the bipartisan office of city manager was created, to insulate city operations from politics. And Cox’s story also shows that while the people will tolerate a king, that tolerance has limits. Woe betide the crown that treads on the people’s sense of fairness.