Home Sports When Geno Attacks: Week 8 & the Other Geno

Somewhere between the time he graduated from St. Thomas Aquinas High School in Fort Lauderdale and the time he set foot on Georgia’s campus, Gene Atkins decided to drop the E in favor of an O. Thus, we now have Geno Atkins. (Check out the feature by Justin Williams in the November issue, on newsstands tomorrow, for more on this.) In the part of the program that lists notable alumni at St. Thomas Aquinas games today, he’s still listed as Gene.

I’m not sure why this change happened. Maybe it was the classic ‘you can be whoever you want to be in college!’ move, like someone growing their hair long and approaching ladies with confidence on campus when in high school they maintained a crew cut and were mortified at the thought of generating a conversation with the opposite sex. Maybe he was tired of thinking he was being called on in Biology class. Or maybe he wanted to avoid people throwing certain clips his way any time he had a bad play or game. (If you don’t know the clip I’m referring to, shame on you and fast-forward to 2:00 remaining.)

But whatever the reason, Atkins seemed to prefer Geno to Gene. When he entered the league in 2010, the only other player in the league with the first name Geno was fellow Florida native Geno Hayes, a middling linebacker who has bounced between three teams in six years. In fact, Hayes was the only Geno to last more than one season in the NFL before Atkins’s arrival. So with Hayes the furthest thing from a household name, Geno Atkins was poised to become known solely by his beloved, self-chosen first name: Geno. Like Seal or Bono. Geno would be synonymous with defensive line excellence, with punishing quarterbacks and embarrassing blockers.

So you can imagine Geno’s reaction when a kid from Miramar High School, a mere 15 miles south of Geno’s alma mater, began setting the college world ablaze last year at West Virginia University. The kid was Geno Smith. Smith ascended the draft charts by posting gaudy numbers, like his infamous 656-yard, eight-touchdown game against Baylor. His name was popping up everywhere—Geno for Heisman; Is Geno the best QB in the draft class? All the while, Geno Atkins waited, fuming. It was HE that was supposed to hold dominion over the name Geno. The name was supposed to be associated with defensive perfection, not offensive prowess. So when Geno the quarterback fell to the New York Jets and became their starter, Geno the defensive tackle circled October 27th as the day he would exact vengeance on the upstart that dare challenge for the right to his namesake.

This is the only explanation for Geno’s performance in last Sunday’s blowout win against the Jets. With the Bengals up so much early, Atkins played few meaningful snaps in the entire game. Instead, he was focused on delivering whatever kind of punishment he could to the unsuspecting rookie. 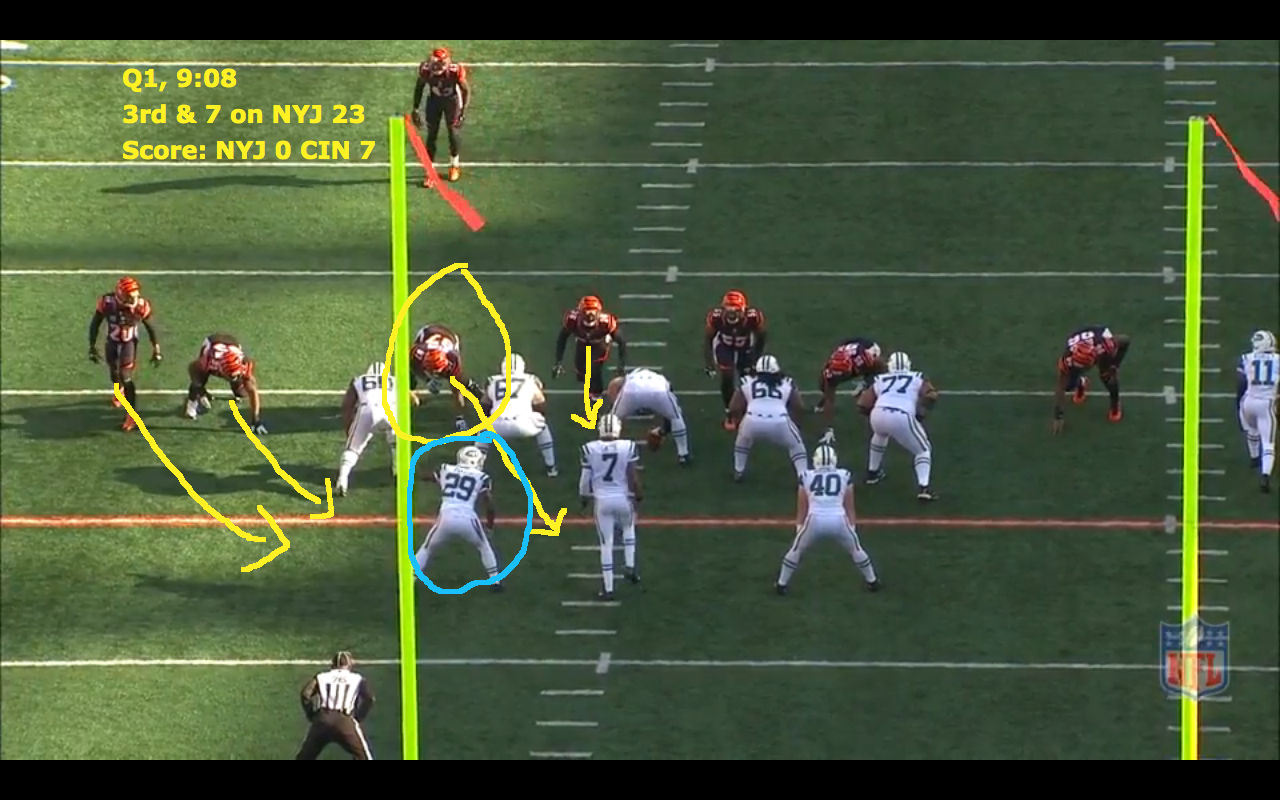 Here the Bengals are bringing pressure from the right side, overloading the side by adding safety Reggie Nelson to the pass rush. The Jets actually have enough men in protection to block this correctly. Running back Bilal Powell (blue circle) seems to recognize that the blitz is coming, yet he is the one that blows his blocking assignment. Though in fairness, most everyone’s blocking assignment is blown when Geno decides to launch left guard Brian Winters backwards. 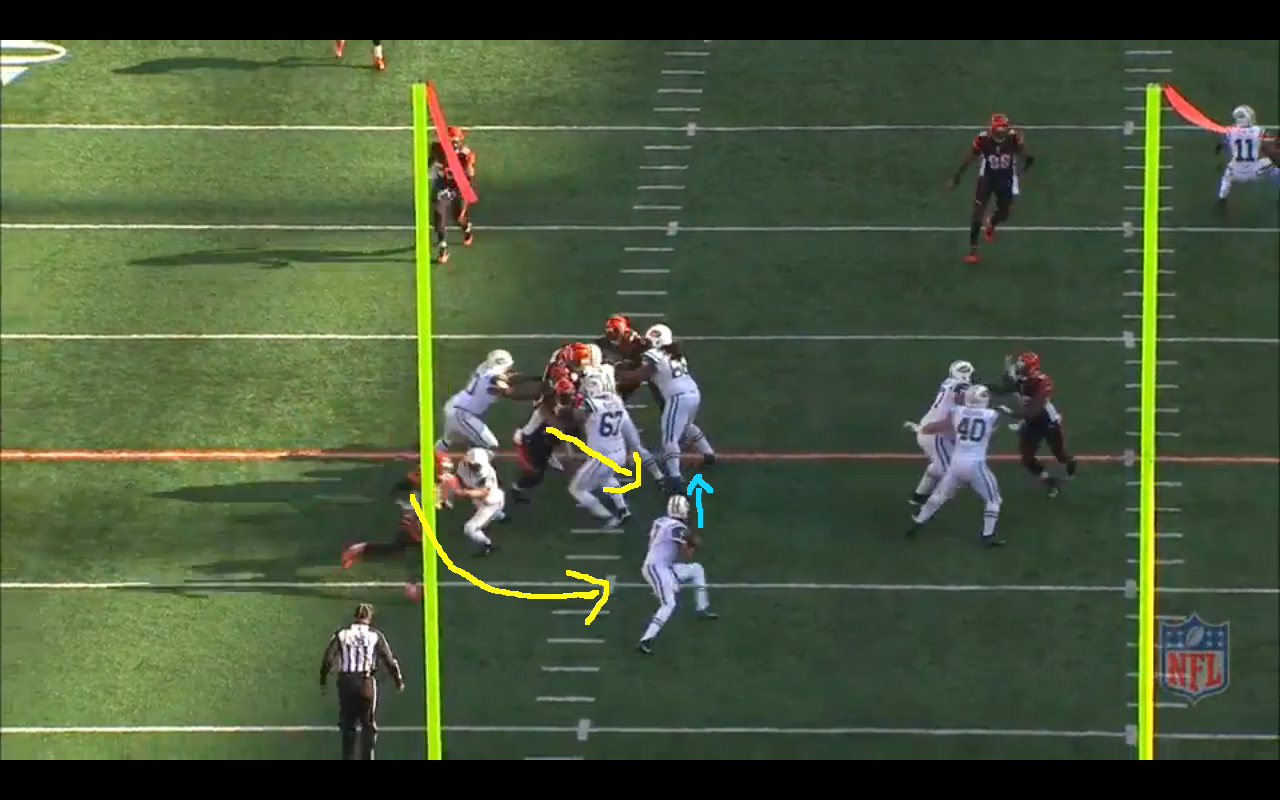 Though he recognized the blitz and should have immediately picked up the outside rusher, Powell snuck inside to help with Michael Johnson, which was useless since Johnson was looping inside on a stunt. So Powell is late in getting a block on Nelson, causing Smith to step up into the waiting arms of Atkins. 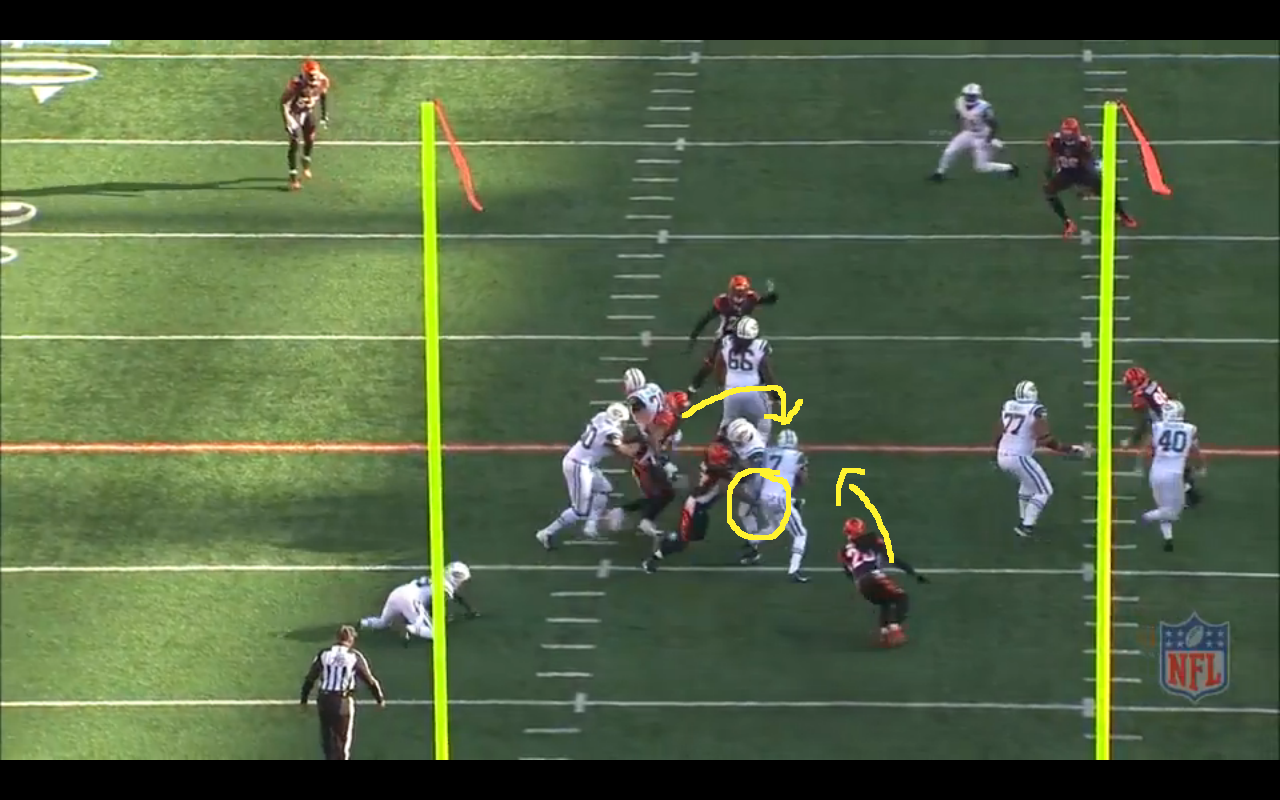 One hand. One big ole mitt is all it takes for the elder Geno to wrangle Geno the Youngster. It’s a pretty incredible play, considering Atkins is still engaged with Waters and nearly crawling on the ground all while bringing down Smith. It was the first sign of a long, long day for the man that was audacious enough to enter the league this year without changing his first name. 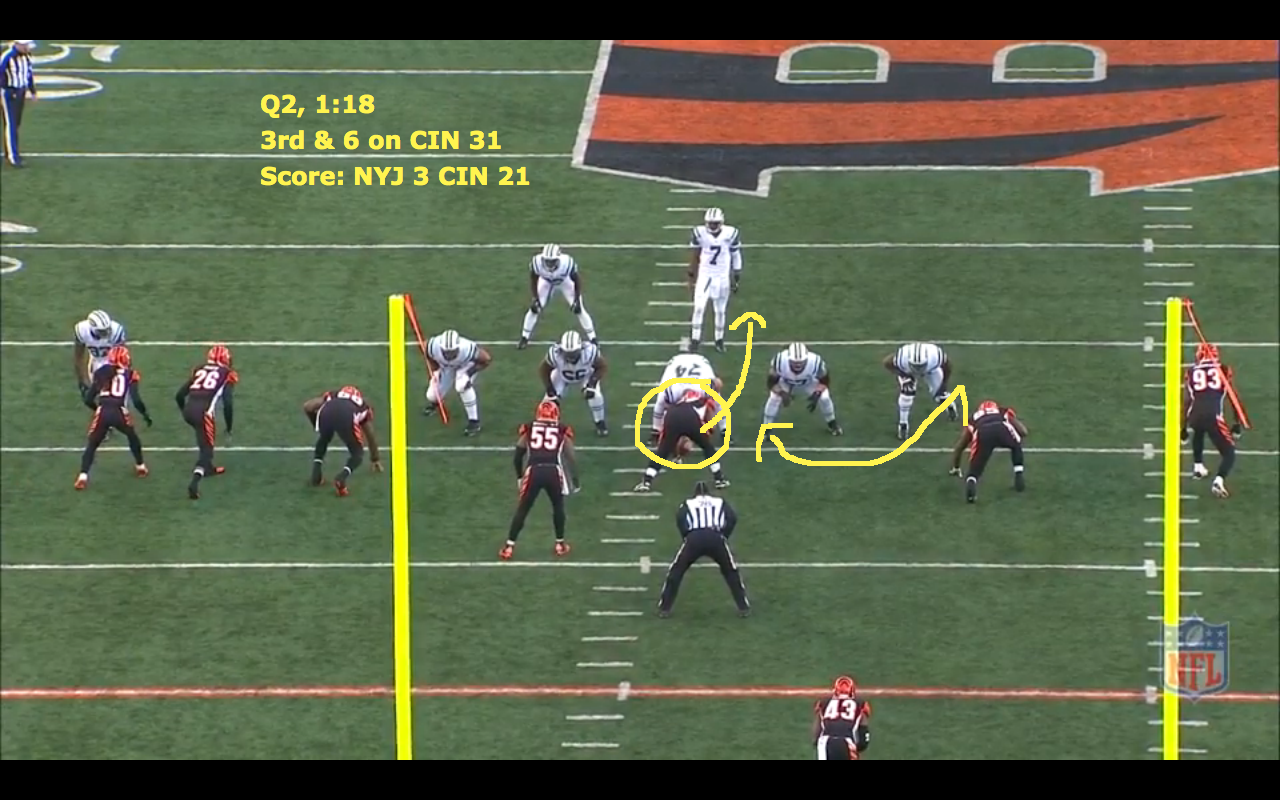 The game is quite nearly out of hand. The Jets mustered a singular yard in the first quarter and they managed a field goal in the second quarter. But Geno the Elder would not let young Geno go into the half in one piece. 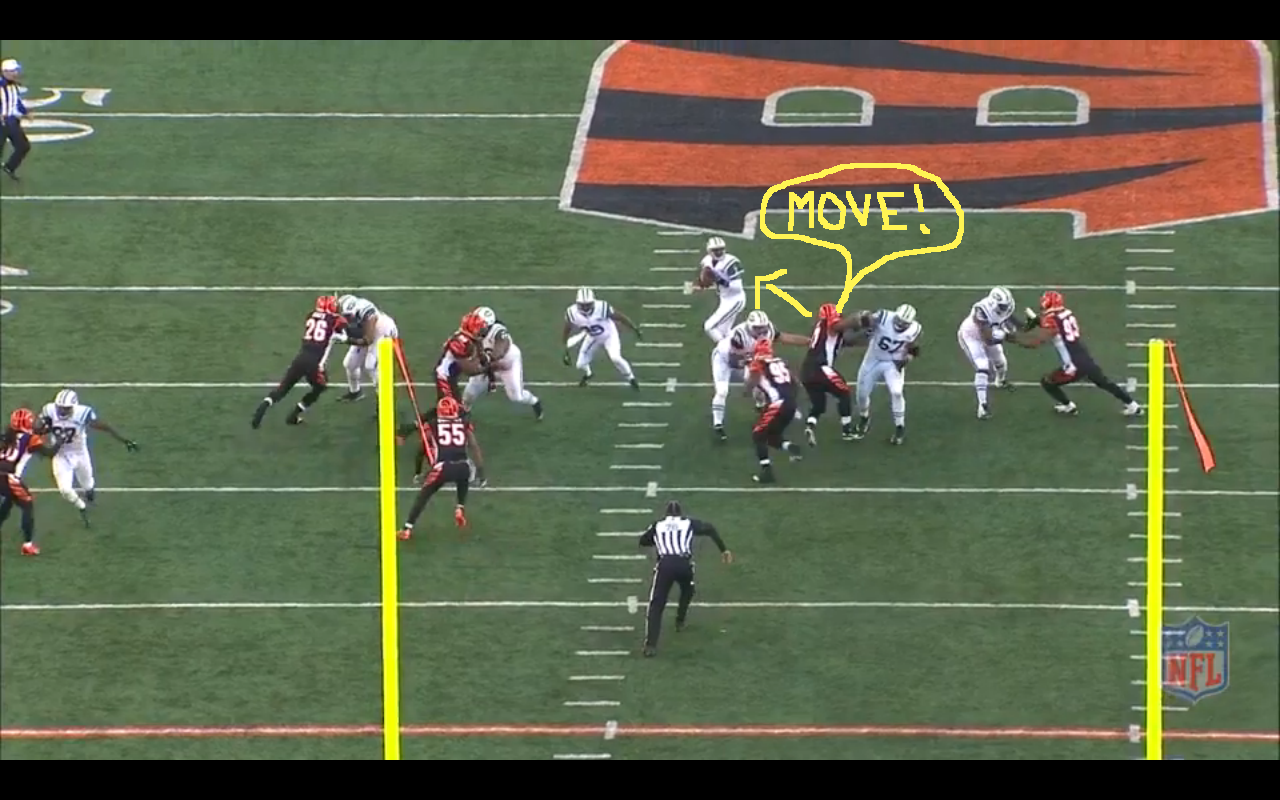 Smith ended up getting the pass away before Atkins could get the sack, sailing it out of bounds. But it came at a grave cost. 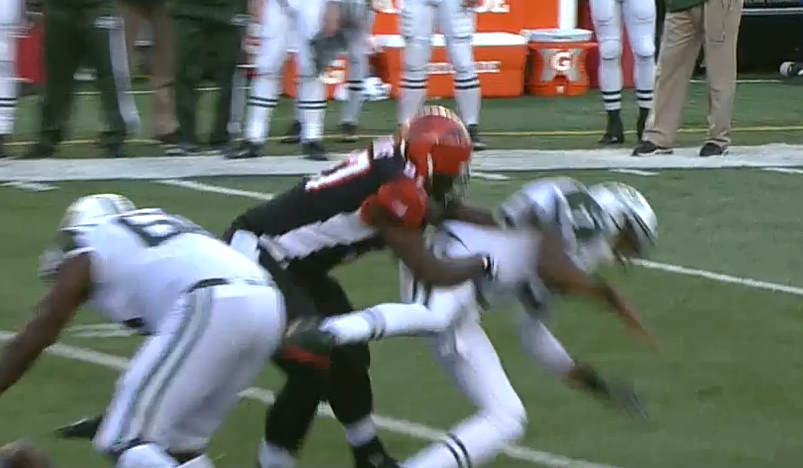 Geno finished with just 37 snaps played, his fewest since Week 2 in 2011 and a welcome break after his 67-snap game last week. But during those snaps, he asserted his dominance over the Other Geno by getting his licks in whenever he could, like in the two plays above as well as a few others, such as… 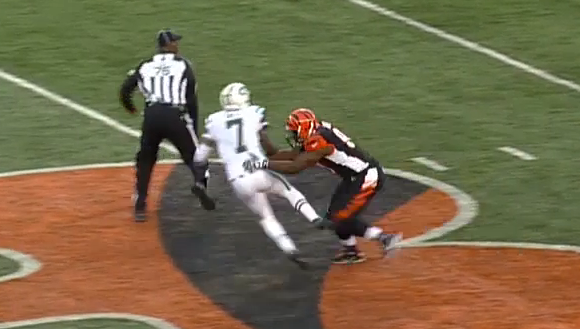