Before we get into looking at how Geno Atkins, Mike Zimmer, & Co. adjusted to the surprisingly good performance of one Thaddeus Lewis, a quick look at a Geno-centric play…

There is an ancient Chinese proverb that can be roughly translated to the following: “A true test of one’s worth is how good they make those around them appear.” (Okay, I just made that up but there are so many damn Chinese proverbs, I’m guessing that’s the central idea of at least one of them.)

To truly appreciate Geno Atkins is to appreciate the seemingly easy plays that the other defensive linemen make on a regular basis because of the attention paid to the feared defender. And while the line is generally praised as a unit, no one else makes the other guys look as good as Geno does. 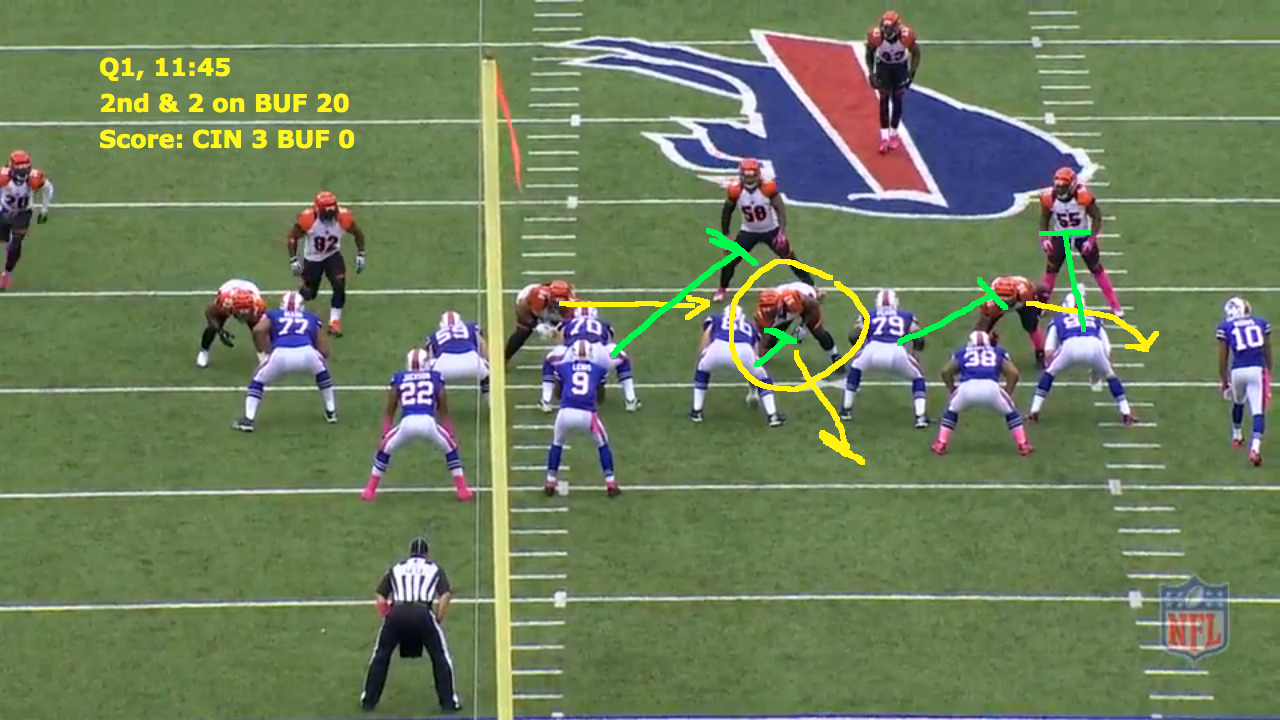 On the second play of the game for the Bills, the plan is to hand off to Fred Jackson over the right side to pick up a first down. Guard Kraig Urbik is faced with the unenviable task of moving Geno out of the way to make room for Jackson. If Geno is not aggressive off the ball and doesn’t generate upfield pressure, the play has potential to go for a first down, if not more. 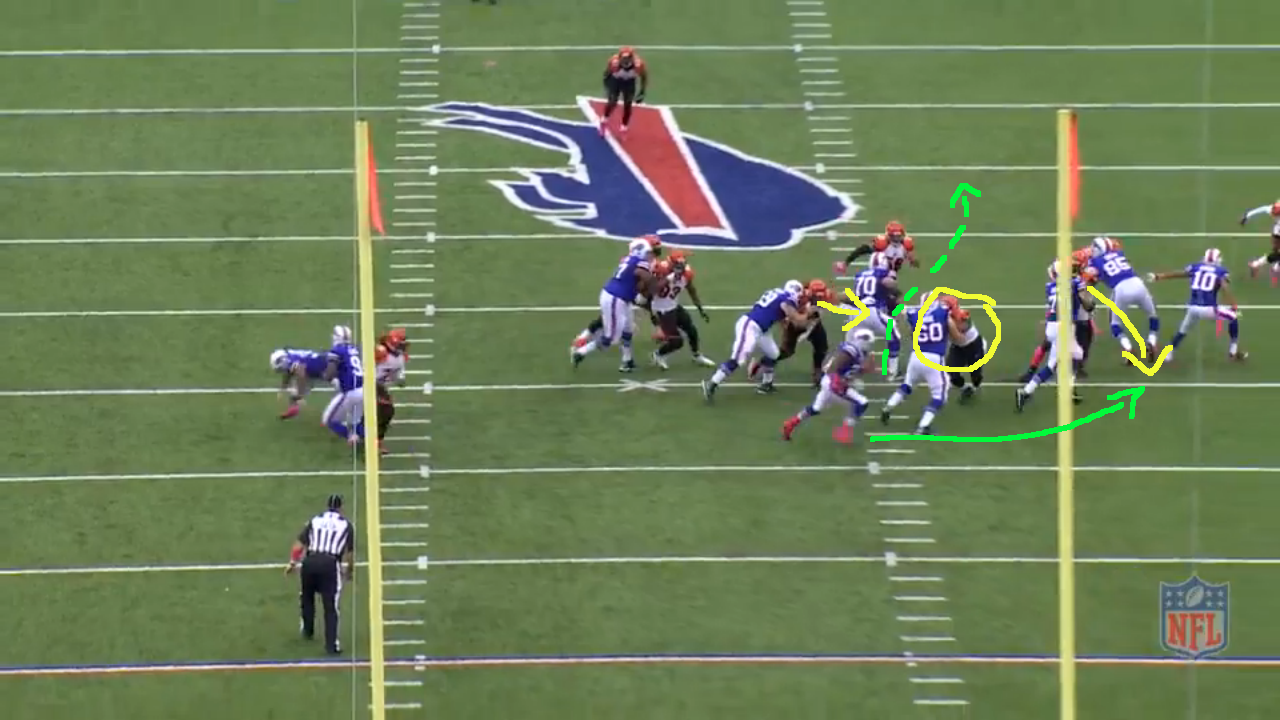 As things tend to go, Geno shoves Urbik backward, clogging the running lane that Jackson was looking for. And to make matters worse, Domata Peko has scraped down the offensive line well and beat his blocker, making it impossible for Jackson to break through the intended gap.

Instead, Jackson is forced to bounce outside, which is not what you want to do on a stretch play. Bills right tackle Erik Pears does his job and blocks Carlos Dunlap, but when Jackson bounces it to the outside, he lands in the waiting arms of Dunlap.

In actuality, this play didn’t have a huge impact on the game. (The Bills ended up scoring a touchdown a few plays later.) But in the box score, that is going to show up as a Carlos Dunlap tackle for loss, but the credit really should go to Geno Atkins (with a nod to Peko as well.)

Now on to Thaddeus.

There are a few ways to combat a mobile quarterback. One is to do your best to pressure him early and hit him often, knocking him out of any sort of rhythm. Another is to have defense linemen sit back, trusting the pass coverage and eliminating any possible scrambling lanes. (I’m sure there are a few more, but I’ll stick with these two for now.)

To begin the game, defensive coordinator Mike Zimmer primarily used Option A: Pressure the quarterback. The quarterback in question is the aforementioned Thaddeus Lewis, a former Duke quarterback with perhaps the most Duke-y name of all time. Coming into the game, the third-year quarterback had just one career start, so there wasn’t much film available to study his tendencies. It showed on the first drove, where Lewis used a big play to T.J. Graham to set up an early redzone trip for the Bills offense. There, we saw Option A fail. 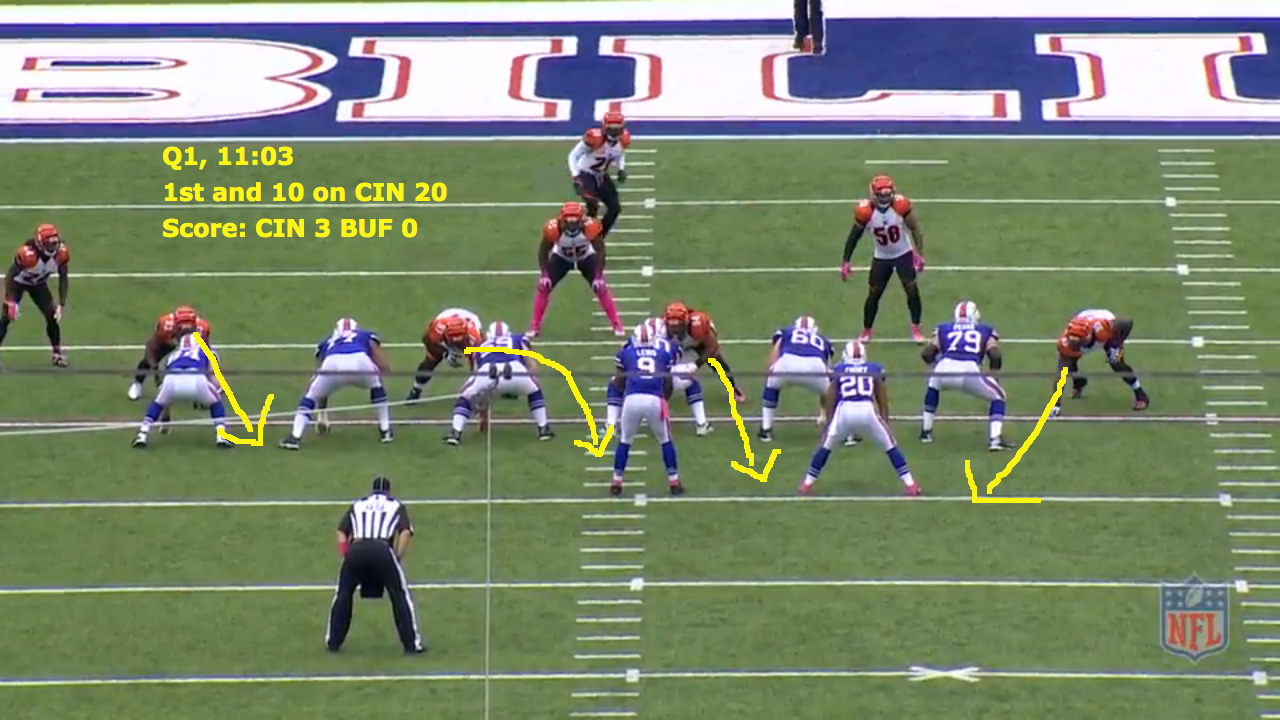 The plan is for everyone to rush the quarterback with #AllDisrespectToThadLewis and his mobility. Problem is, this leaves no one to contain the upwardly mobile target. 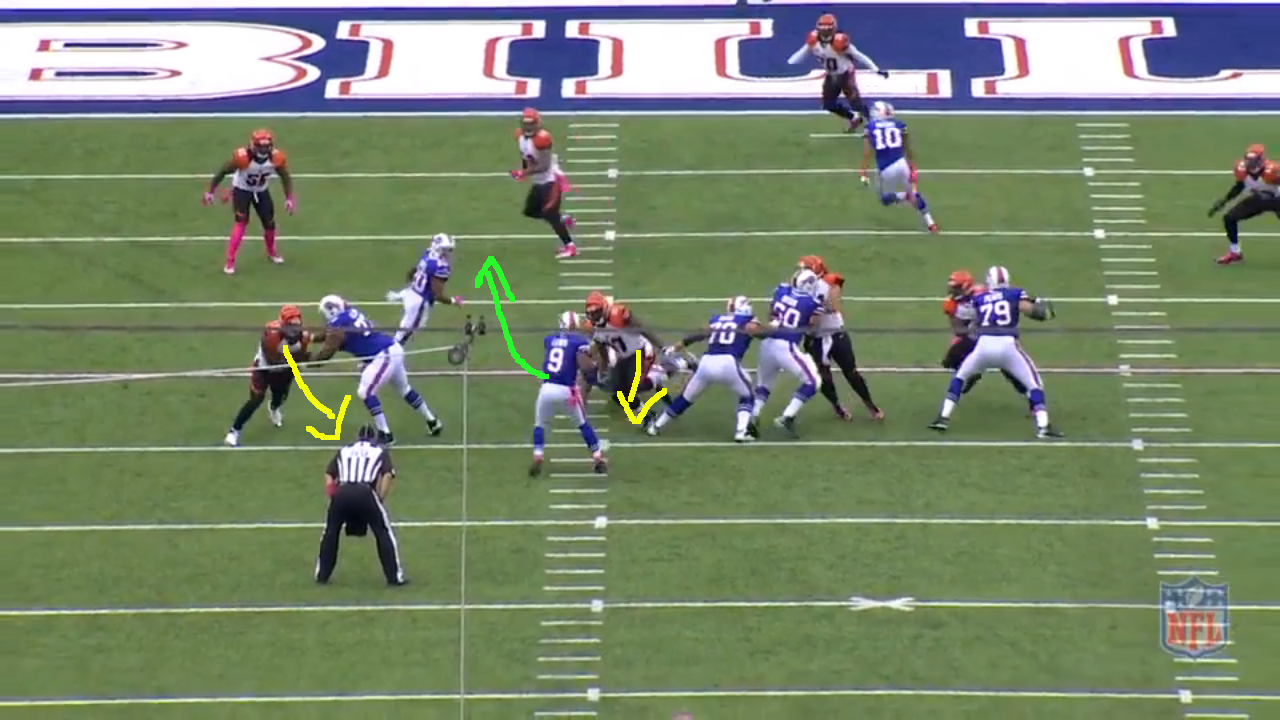 Now normally, when Geno runs basically unblocked at a quarterback, said QB falls to his knees and begs for mercy. But one with mobility like Lewis can evade that rush and scramble for a few positive yards rather than losing seven or eight yards with a sack.

Here, that’s exactly what happens. Michael Johnson loses any semblance of containment on the left side while Geno rushes up the middle, leaving a hole for Lewis to run to. 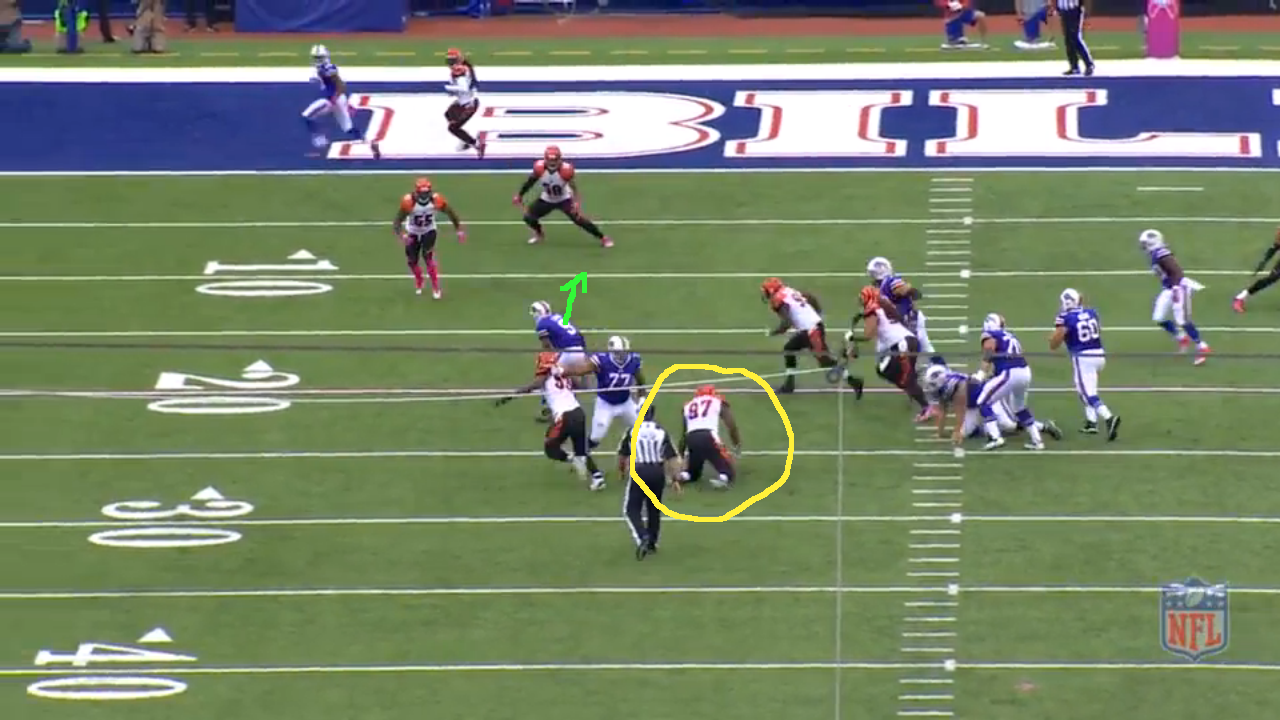 He ends up gaining a few yards and leaving poor Geno helpless six yards behind the line of scrimmage. And to compound the lack of containment, Vontaze Burfict gets called for a personal foul penalty (for kind of falling on the ground near Lewis, I think, but whatever). A few plays later, he scrambles into the endzone for a nine-yard touchdown.

Maybe that first drive is what the Bengals needed to make some adjustments for a mobile quarterback. The last truly mobile quarterback that the Bengals faced was Robert Griffin III in Week 3 of 2012. (Though you cold make an argument for Aaron Rodgers as well, a good runner when necessary.) Lewis’s mobility is nowhere near Griffin’s but it is a significant change of pace from the lumbering signal callers the Bengals usually face. (See: Roethlisberger, Ben; Flacco, Joe; Weeden, Brandon.)

Here’s how the Bengals adjusted to his mobility. 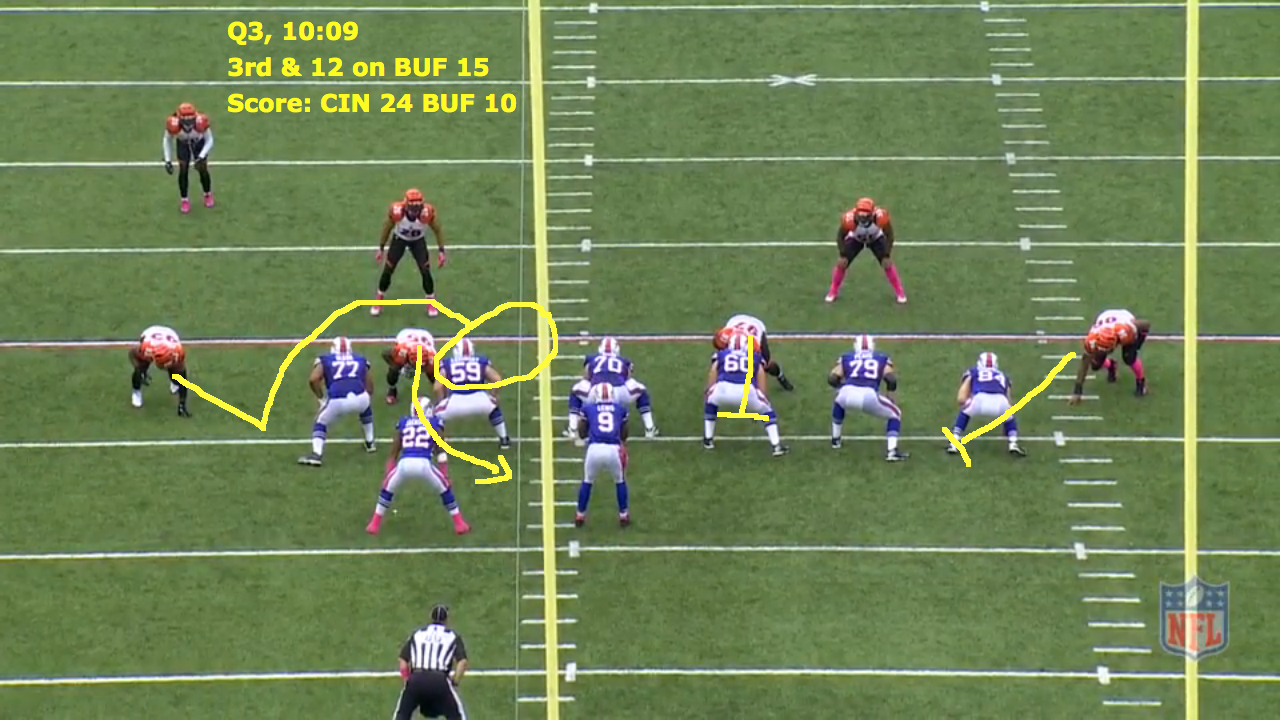 On a third down play on Buffalo’s second drive of the second half, Mike Zimmer decides to run the stunt he enjoys so much. Wallace Gilberry rushes upfield while Michael Johnson, lined up outside the left tackle, fakes an upfield rush, and loops in behind Gilberry. Typically, this sort of stunt is used to generate pressure up the middle from the defensive end, in this case Johnson. Instead, Johnson drops back as a QB spy and Gilberry is the one charged with getting after Lewis. 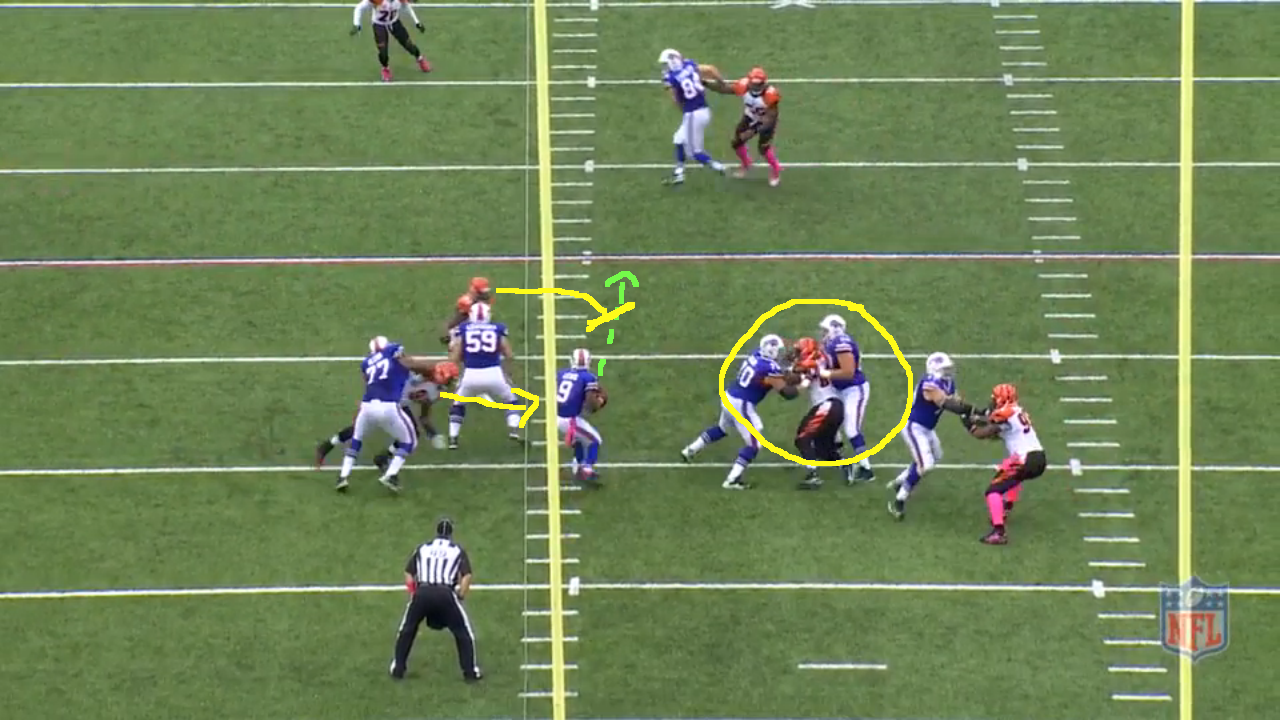 Upon realizing that there is no one open, Lewis briefly steps up in the pocket. At this point, he wants to run up the middle, but Johnson would be waiting to pounce if he did. The indecision buys enough time for Gilberry to earn his third sack in two weeks.

(Also, please note the unfortunate position Geno finds himself in on this play, circled to the right of Lewis. There is some sort of Orange is the New Black joke to be made there, but I’ll leave that up to you fine people.)

The rush aimed at containing the quarterback can be just as effective as other rushes, namely because it doesn’t really give the QB an option to throw the ball away since the pocket is so well guarded. Once the Bengals got their bearings, they employed effective containment rushes throughout the game.