Geno Atkins does not like rhythms. When he listens to music, he refuses to tap his feet or nod his head. In fact, rumor has it that when Aaron Maybin was inevitably listening to some classic Gloria Estefan hits while painting pretty things, Atkins smashed Maybin’s Beats by Dre pill to smithereens.

So it should come as no surprise that Geno’s mission against Tom Brady and the New England Patriots was to disturb Brady’s rhythm in the pocket early and often. The second play of the game was a perfect example; on a simple play action fake, Geno burst past the left guard with the quickness that separates him from the rest of the defensive-tackle pack. It was perhaps Geno’s most impressive snap of the season and it set the tone for the entire game. (The Bengals would total 4 sacks, 6 QB hits and 11 QB hurries.) According to ProFootballFocus.com, Geno himself totaled the aforementioned sack and 3 QB hurries in addition to his best performance against the run so far this year.

And the Patriots were well aware of the force they were dealing with. They were steadfast in ensuring that two players were available, if not assigned, to double team Geno. It was the most respect any team has shown Geno this year. The Patriots made a clear decision that, especially with Michael Johnson out with a concussion, they were going to make other players step up and pressure Brady. So in Week 5 of When Geno Attacks, we’re going to take a look at how Bengals defensive coordinator Mike Zimmer counters the extra attention sent Geno’s way. 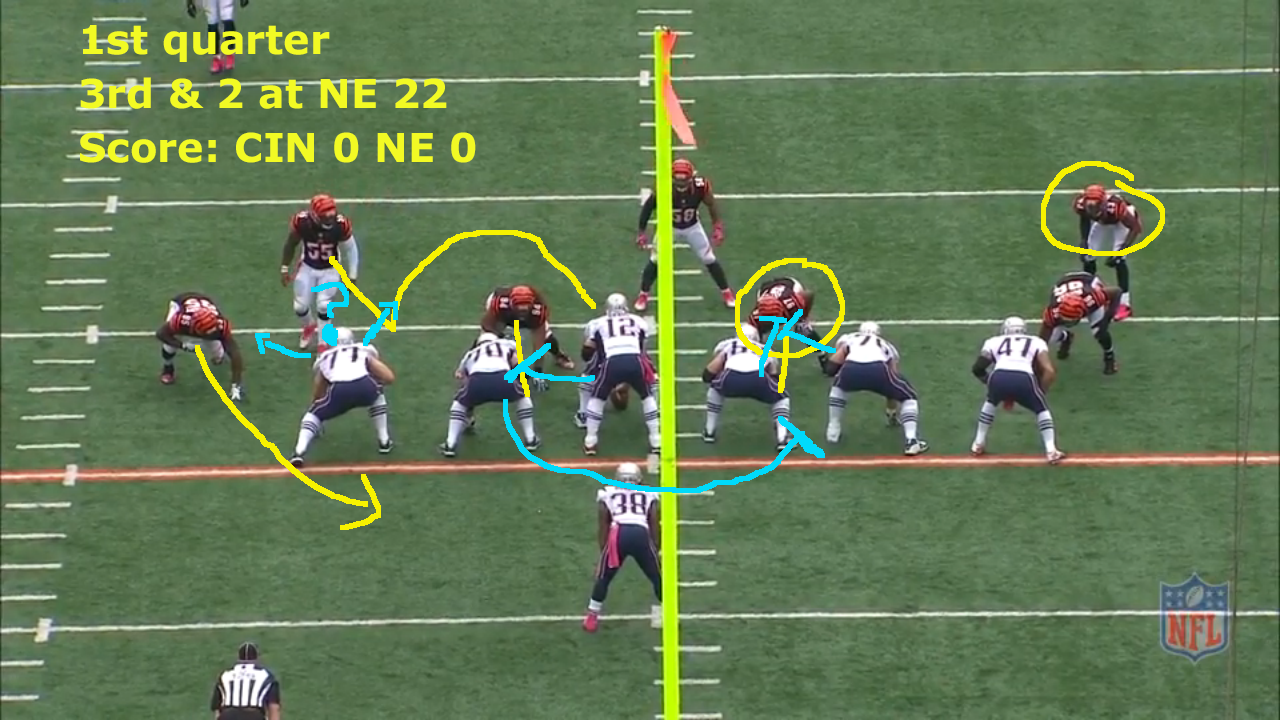 As anyone that watched a moment of Hard Knocks knows, Mike Zimmer is a frightening man. He commands respect from both humans and animals alike (or you may be stuffed and mounted on his trophy wall). What’s even more frightening is taking into account his ability to strategize.

On a key third-and-two on the Patriots second drive, Zimmer calls a blitz that confuses Brady and the Patriots offensive line. The plan is for Vontaze Burfict to fake a blitz between the left tackle and guard before spinning back in to rush up the middle. Meanwhile, safety George Iloka is faking a blitz, a key component in the play. Brady thinks that the pressure is coming from his right, so he audibles the coverage and calls for left guard Logan Mankins to pull to the right in case Iloka blitzes.

What does this have to do with Geno? Well the whole reason that Mankins pulls to the right is because both the right tackle and guard are double-teaming Atkins no matter what.

With Mankins pulling, this leaves left tackle Nate Solder with a confusing decision when they snap the ball. 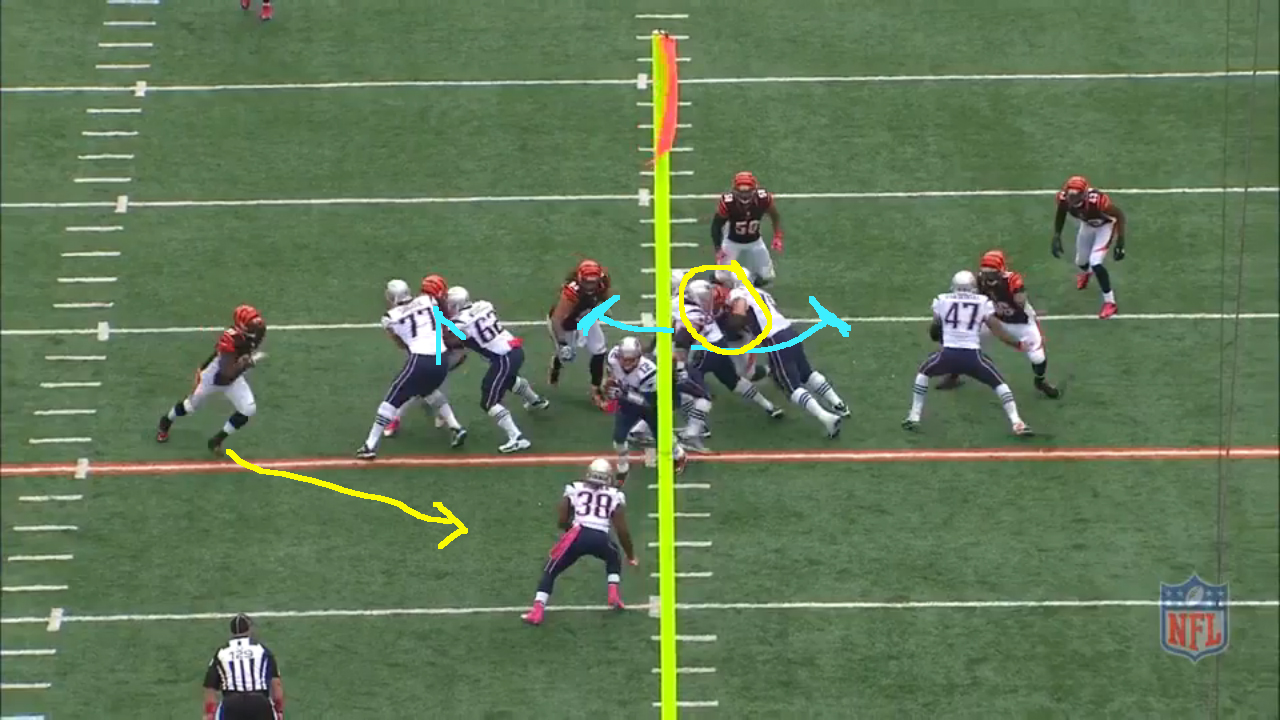 As Zimmer hoped, Solder is confused and doubles down on Burfict and cannot recover quickly enough, leaving Wallace Gilberry with a clear path to Brady. And Mankins? He is moving to block the vacant spot where Brady thought Iloka would be coming from.

Gilberry ends up zipping in virtually unblocked to take down Brady and force a fourth down.  And if he hadn’t sacked Brady… 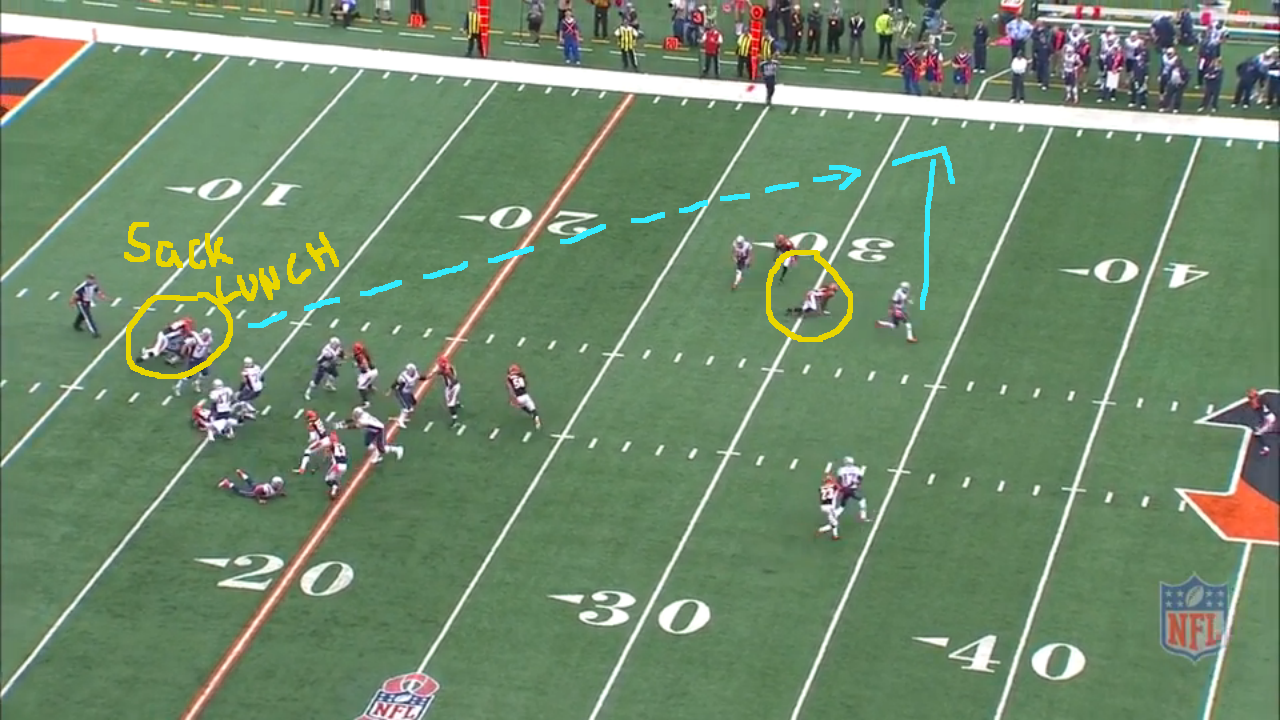 Brady would have likely had an easy 15-yard completion, and possibly more, to Kenbrell Thompkins, who brought poor Adam Jones to his knees with a lightning-quick move as he transitioned into his break. But Gilberry brought the pressure and negated a big third -own conversion early in the game. 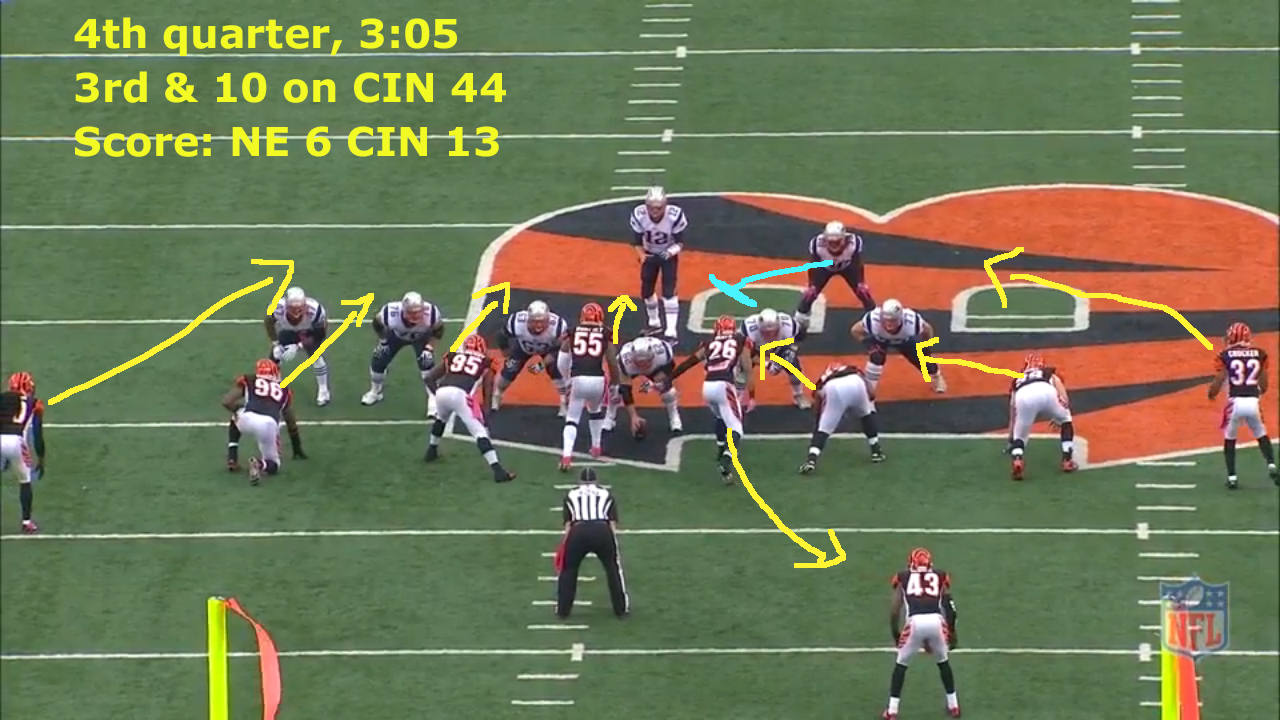 There’s 3:26 remaining in the fourth quarter and Tom Brady has the ball. It’s 3rd and 10 at their own 44-yard-line, with the Patriots down a touchdown. I think what transpires next is a source of nightmares and therapist couch fodder. Brady has made his bones converting these exact types of plays, and I bet that more than a few of you Bengals fans thought that he’d convert it, score a touchdown and tie the game. (Don’t you lie to me now.)

You know who is not afraid of this scenario? Mike Zimmer. That could be because he has had the fear cortex in his brain surgically removed and replaced with badass neurons, but either way, Zimmer decides to bring everyone on the blitz. (Also known as the ole’ suicide blitz for all you Madden players.)

The Bengals are bringing eight men to the line and blitzing seven. The key is to get the offense to anticipate both Taylor Mays and Vontaze Burfict blitzing up the middle. That way, running back Brandon Bolden has to decide whether to help on the inside or the outside. Since Mays is actually dropping back into coverage, getting Bolden to help on the inside is the end game. (Also, odds are Tom Brady is not anticipating both Chris Crocker and Reggie Nelson rushing off the edge. Mike Zimmer, so dastardly.) 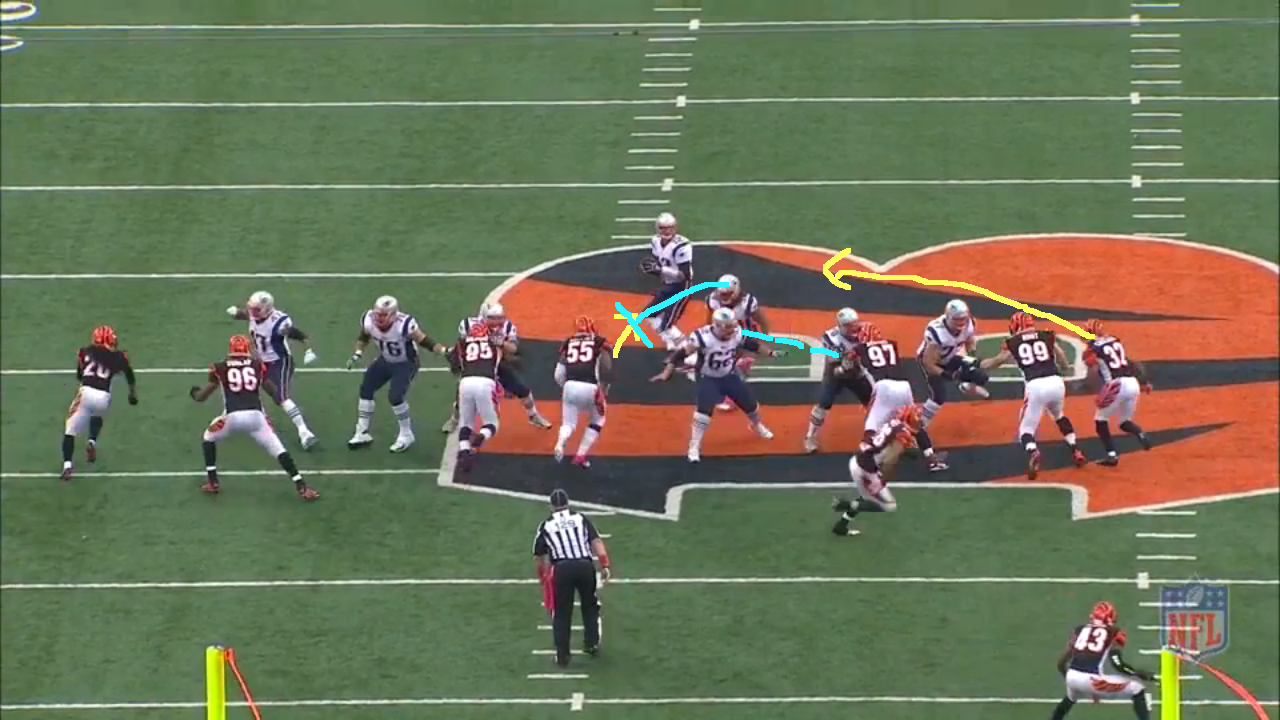 Bolden rushes to the inside to block Burfict, who was ignored by center Ryan Wendell because of…GENO! Yes, Wendell is so concerned with Mankins’ ability to handle Geno one-on-one that he has to keep an eye on him instead of picking up Burfict rushing straight up the middle. If the Patriots read this correctly, they have enough guys in protection to stop the blitz. Wendell should block Burfict, Bolden should be on the outside chipping Crocker and Mankins should be able to hold Geno back for at least a second or two. (Except, probably not.)

The threat of Geno is enough to derail this play, giving Crocker a sack. (For some reason, Gilberry is credited with a half sack on this play. He doesn’t really do anything but he lands nearest Brady when Brady falls, so I guess that’s the reason. But give Crocker the credit on this one.)

We talk all the time about Mike Zimmer being a defensive wizard and being primed for a heading coaching position and all that goodness. But here we actually saw schematically the aggressive, fearless play calls that make this defense so difficult to prepare for.