In superhero movies, particularly in the blockbuster sequels and trilogies that have populated theaters over the past decade, there always comes a point when the superhero must face his own humanity. He must tackle his inner demons that seem to rear their ugly heads at the most inopportune times. They are moments where the audience is supposed to think, Hey, these are real people just like me! The characters aren’t just suits of armor or strange space gods or fast-talking playboy billionaires; they face the same sorts of problems that all humans face.

I suppose it’s this depth of character that helps give certain superhero movies legitimacy in the exclusive movie-critic clique. I understand the cinematic merit of the idea, but sometimes there’s no need for emotional and personal struggle to sweeten the inevitable victory. Sometimes you just want to watch the superhero destroy bad guys and blow shit up. (Side note: this totally explains why I ruthlessly destroyed NFL Europe teams in Madden from 1999-2007.)

That’s why it was frustrating to watch Geno Atkins during last week’s win against Pittsburgh. Atkins looked surprisingly…well…human. I watched the game live and found myself asking no one in particular, Where has Geno been? On paper, it seemed like Atkins would have a field day playing against a center that hadn’t even been on the team for a whole week and a pair of young guards.

But, through a series of double teams and surprisingly effective pass protection from Steelers guards David DeCastro and Ramon Foster, Geno was held at bay. The superhero had to confront his humanity.

I re-watched the game twice, trying to find the moments of superhuman power. But, for the first time since I began writing this in the middle of last year, they were difficult to find. Sure, he had one sack, but that was just a product of Ben Roethlisberger scrambling for 10 seconds and the quarterback twisting into Geno. It was hardly worth a second look.

So this week, Geno is going to be relegated to the role of sidekick. Instead, let’s take a look at this week’s winner of the superhero-for-a-day promotion: Michael Johnson. Before the season, it was not clear if Johnson would even be on the team. He was a free agent looking to secure a long-term extension. But instead of an extension, the Bengals slapped the franchise tag on Johnson and extended defensive end Carlos Dunlap (which I supported) and Atkins. Johnson was the odd man out, playing on a one-year deal.

With Geno being rendered somewhat ineffective, Johnson assumed the rule of quarterback attacker Monday night. While Atkins blends his quickness with explosive power and leverage, Johnson relies almost exclusively on his speed to make plays. He’s a far different player than Atkins, but had a Geno-ian impact on the game. 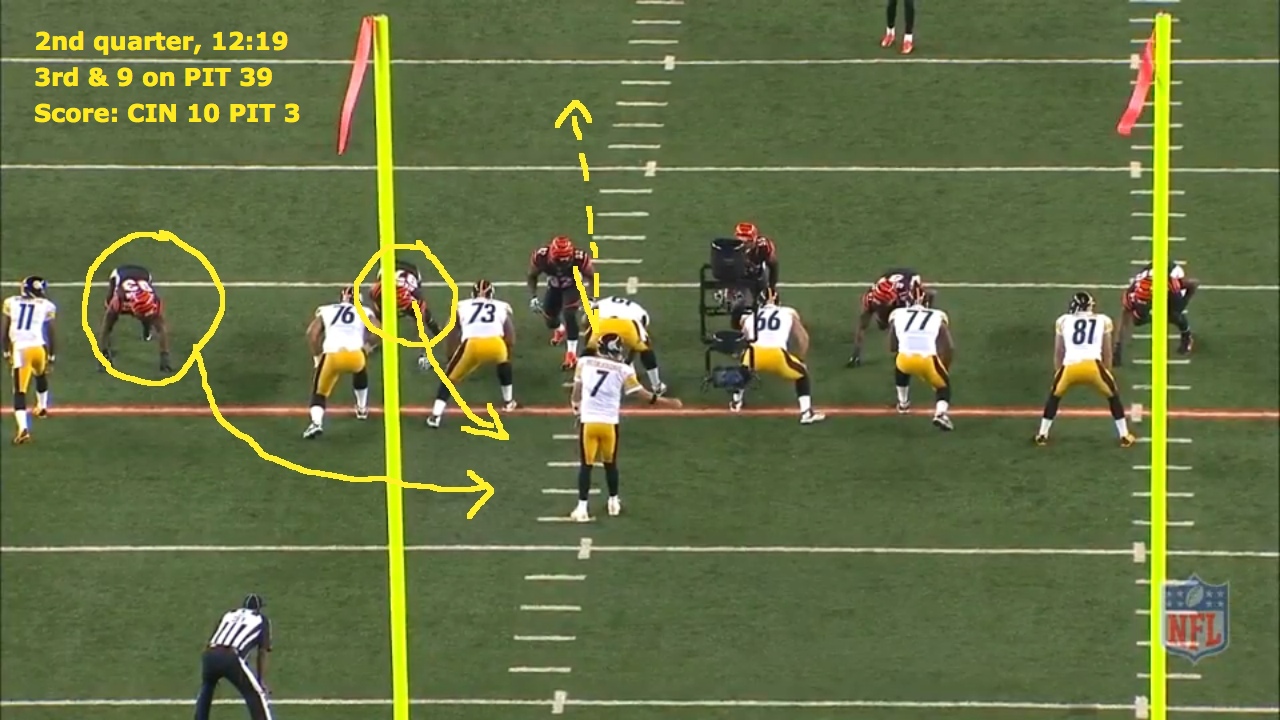 Here, the Bengals’ plan is to confuse Pittsburgh’s offensive linemen into thinking there are more people coming than there are. It starts in the middle with linebacker—and devoted member of the Church of LeBeau—James Harrison. Harrison is going to fake a rush up the middle and drop back into coverage, drawing the eyes of the left side of the Steelers line. To Harrison’s right is Atkins, who is going to be matched up one-on-one against Ramon Foster. Split on the far end is Johnson. His plan is to set himself up wide so he can take the straightest line between him and Roethlisberger. 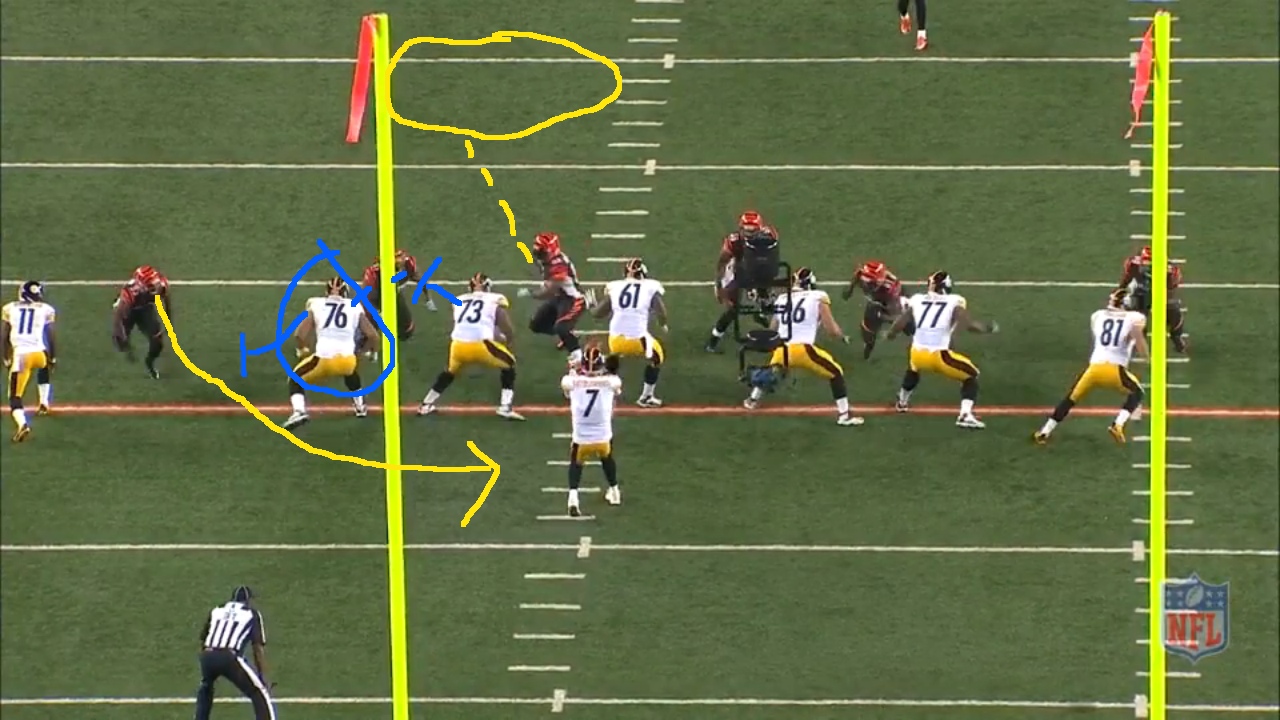 The plan worked. Harrison is now dropping into coverage, but he has accomplished his goal. While Foster is still in a good position to block Atkins, notice left tackle Mike Adams (circled) looking toward Harrison right after the ball is snapped. If Harrison would have come, Foster would have slid over to help block Harrison, Adams would have stepped over to help block Atkins and Johnson would have been unblocked. But even just a quick look and step in the wrong direction gives Johnson an extra second head start he probably doesn’t even need. 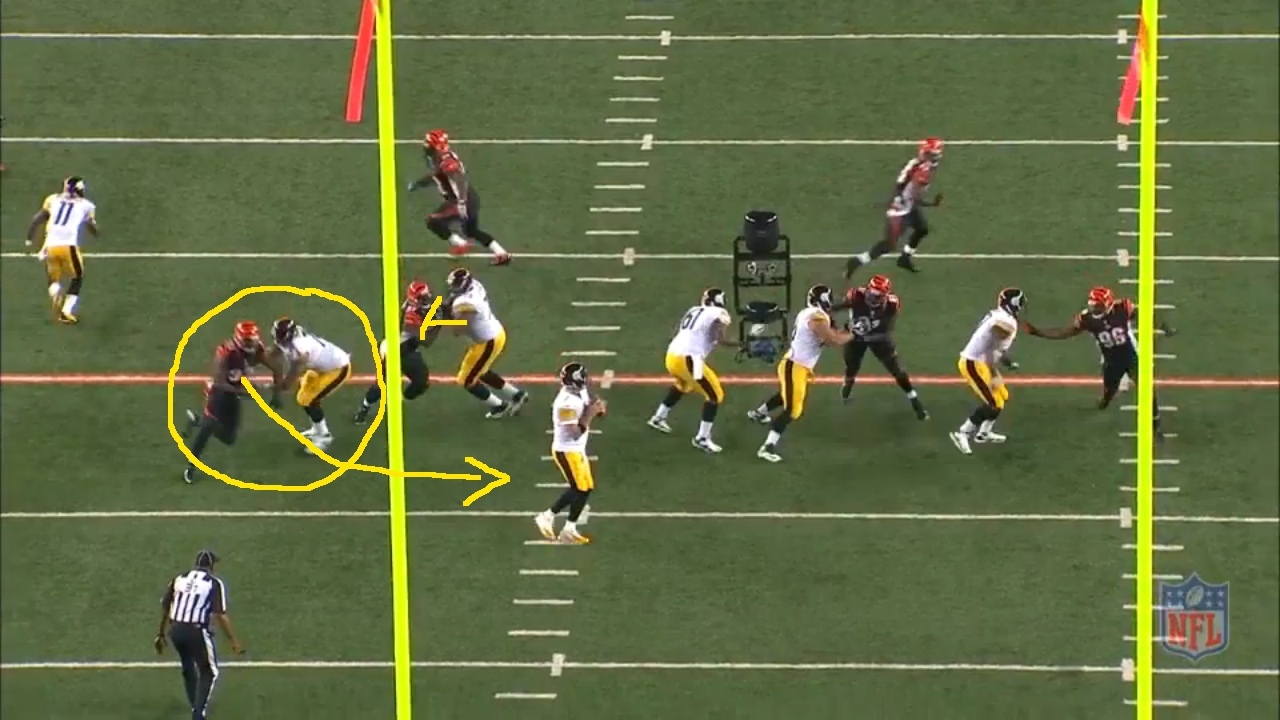 Johnson has Adams beat, and Roethlisberger is beginning to feel the pressure. Also, if you look closely, you can notice how unbalanced Adams is. Instead of creating a solid base with his back foot, he is transferring the weight from his front feet to the back because of the aforementioned misstep. 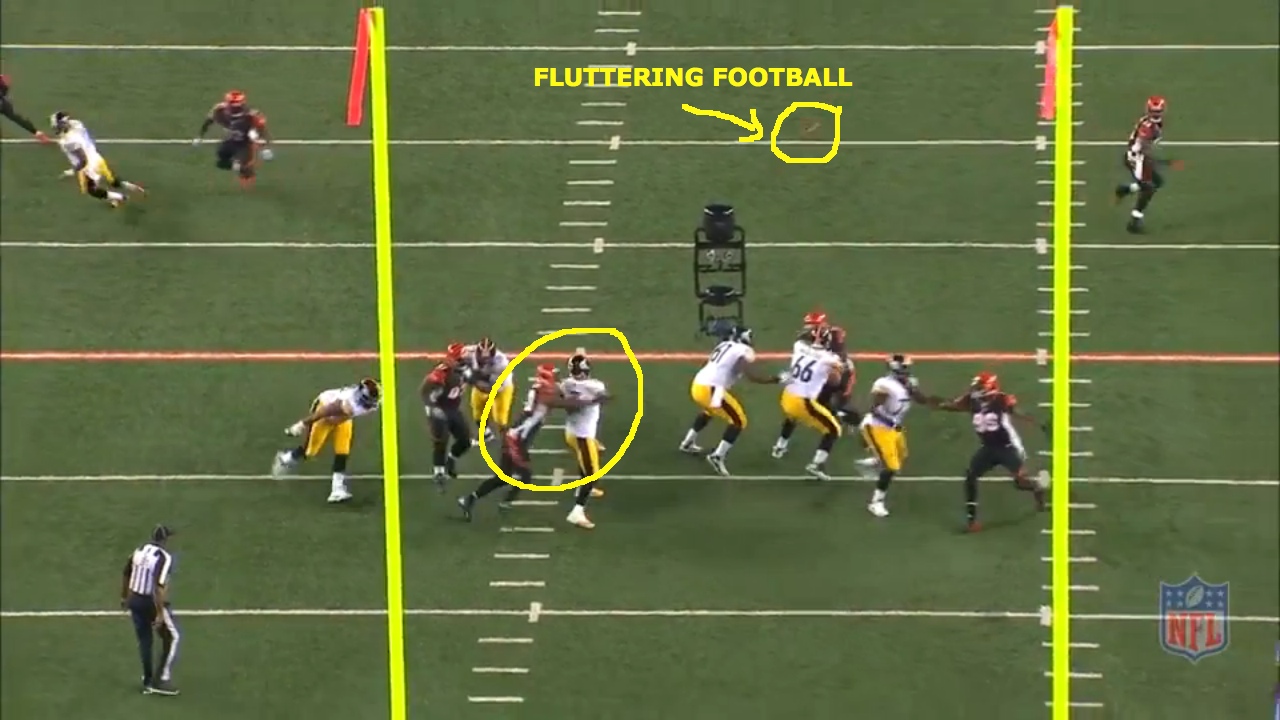 And down goes Roethlisberger. He gets the ball away, but the pressure from Johnson leads to a ball fluttering harmlessly in the direction of a confused Jerricho Cotchery. Johnson is able to deliver a solid hit on Roethlisberger and the Bengals force a three-and-out. (If you zoom in and look just to the left of the hit, you can see Atkins grinning and nodding approvingly.) 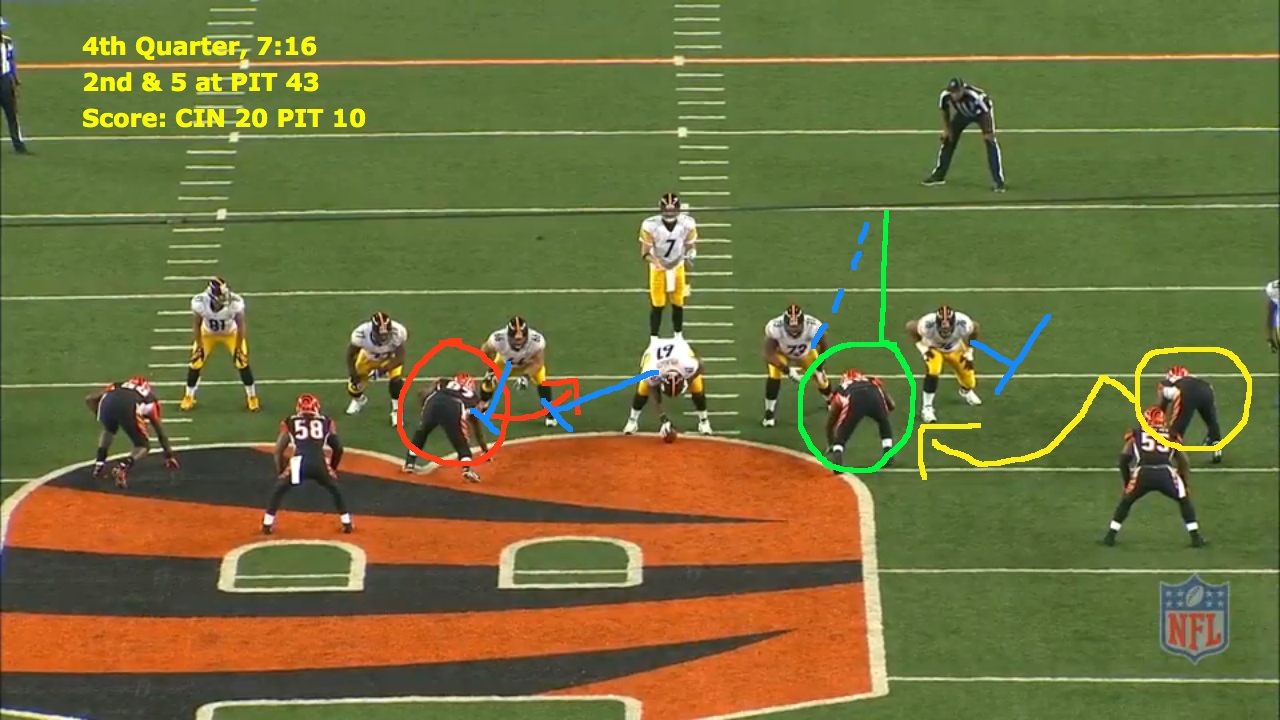 This play is not normally the kind of play I look at because it resulted in a first down for the opposition. But you’ll see why in a mere three photos. Here, Johnson is lined up wide again on the right side of the line. The plan is to cut up the field before cutting back and rushing up the gap that was vacated by Wallace Gilberry. Gilberry (green circle) is heading upfield in order to 1) create a rushing lane for Johnson and 2) prevent Roethlisberger from scrambling out of the pocket. Meanwhile, our humanized hero is charged with the unenviable task of occupying two blockers. 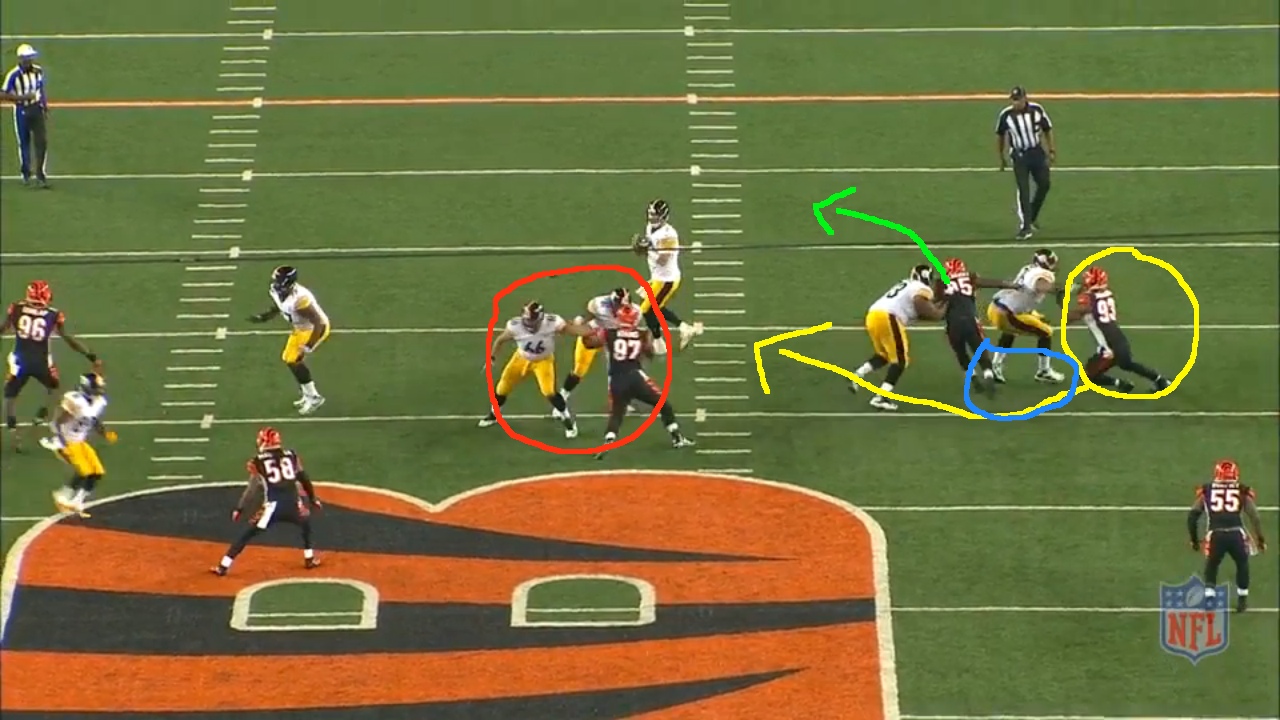 Here Johnson (yellow circle) is able to use his quickness to get Mike Adams—poor, poor Mike Adams—to heavily lean upfield. Based on rushes earlier in the game, like the one diagrammed above, it was a smart move. But in this case, he is playing into the defensive line’s plans. Johnson sheds the block and moves to the wide-open hole left by Gilberry’s upfield rush. 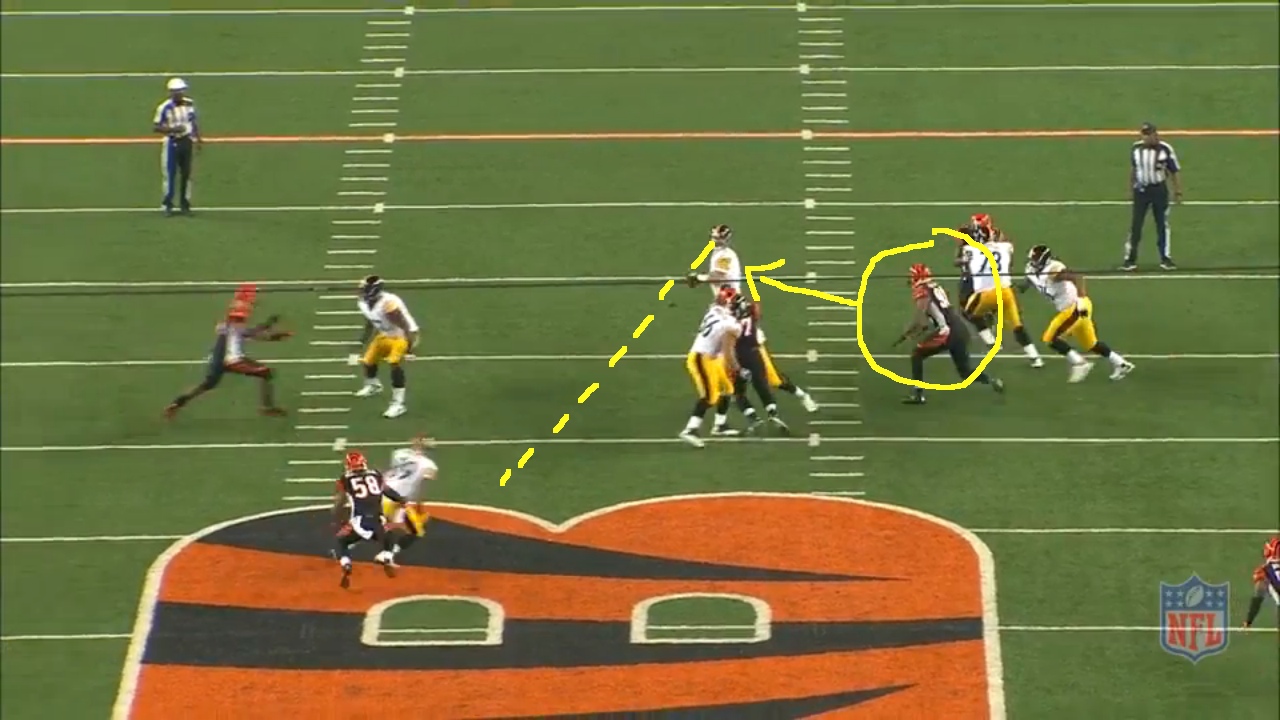 Here’s the actual transcript from the NFL Films mind-reading footage of Monday’s game. Ben Roethlisberger: “Really? I have to throw it to Jerricho? AGAIN? He hasn’t caught anything all day long, I know he’s going to knock one into the air that’ll be intercepted in a few plays, isn’t there anyone else? Anyone at all? Would taking a sack be the worst thing in the world? Are all Michael Johnson’s really fast? Screw it, I guess I’ll throw it to Jerricho. Whatever.” 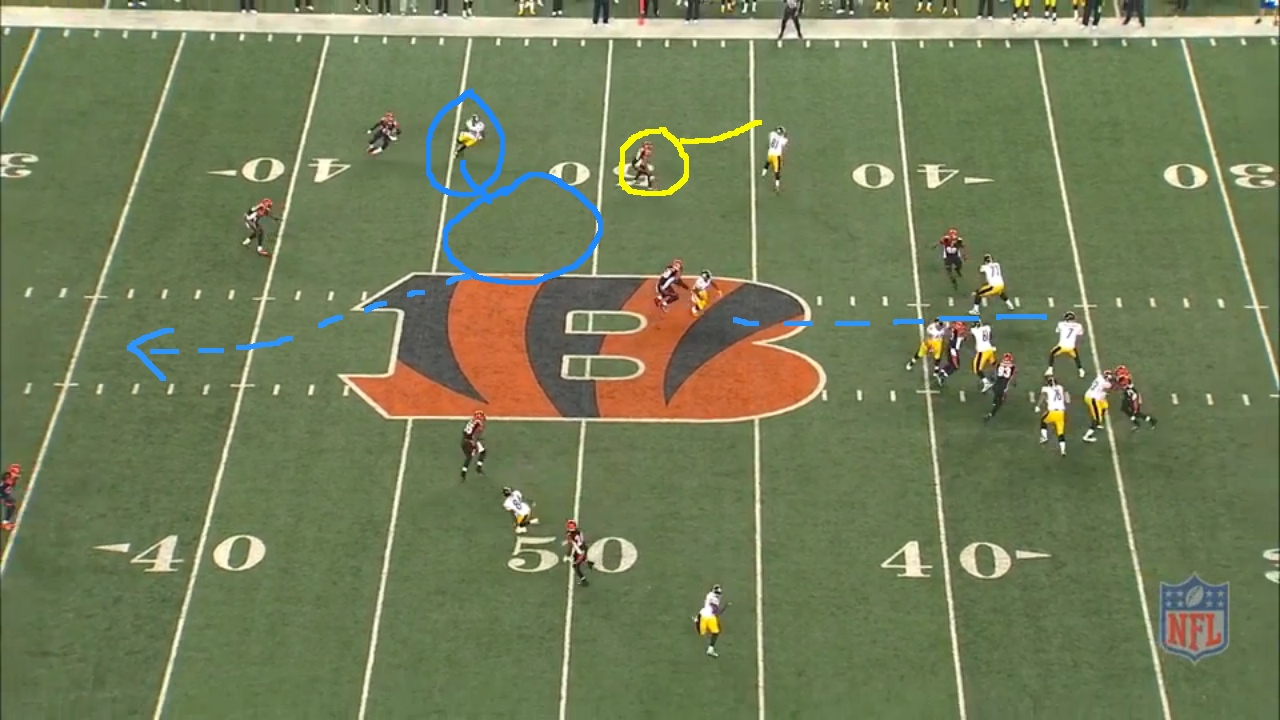 Here’s why Johnson’s pressure was so important. If Roethlisberger had about one more second before he had to get rid of the ball, he may have been able to hit Emmanuel Sanders (blue circle). If Sanders cuts across the field and Roethlisberger hits him in stride, Sanders is fast enough that he may be able to break down the middle of the field and score. Sure, that may be a little presumptuous, but it’s undeniable that in the given situation, up 10 with under eight minutes remaining, the Bengals would much rather have Cotchery catch a short pass than give Sanders the opportunity to make a big play. But with Johnson there, Roethlisberger has no choice but to check down. It may have been a first down, but it could have been far more harmful to the Bengals’ lead.

As for this weekend’s matchup against the high-powered Green Bay offense, let’s hope Geno gets back to blowing shit up.