Home Sports When Geno Attacks: Week 15 and a Not-So-Merry Christmas

I believe it was the great philosopher Harry Dunne that quipped to renowned bard Lloyd Christmas, “Just when I thought you couldn’t possibly be any dumber, you go and do something like this…and totally redeem yourself!”

That’s where we were last week after Good Andy Dalton’s appearance following a series of clunkers, trying to convince everyone that the good performance was a sign of more positive things to come for a team that has been mediocre over its last six games. Then Sunday night’s performance serves up a hot, steaming pile of reality to the fan base. The Bengals are not in a great situation right now. They have a defense that is missing its two best players, lost for the season with injuries, a void felt more and more with each passing game. Their punter, one of the team’s most consistent performers, is the latest Bengals player to break his jaw due to the blindside shoulder of an opponent. And then, there’s the quarterback.

Sunday’s loss was not Andy Dalton’s fault. He did not make any egregious errors, didn’t put his team in any real danger by delivering the ball too quickly and not reading his options. Yet, there was something palpable missing from his performance. It was a listless showing, and frankly, rather boring to watch. A whopping 32 of Dalton’s 41 aimed passes, which excludes batted balls and throwaways, went for less than 10 yards. There was only one attempt (an incompletion) that traveled beyond 20 yards. And while he did throw two touchdown passes, with a degree of difficulty that fell somewhere between Candyland and Go Fish, the performance was far less than remarkable.
It seems unfair, then, to focus solely on Dalton in analyzing the loss to the Steelers, which makes the next two weeks far more important than they should have been. So I’ll throw a bone to a few good things from Sunday (though there were not many) a few paragraphs from now. If you are looking to be filled with merriment and joy this Christmas, skip ahead a few lines and there will be at least a small reason to smile, I think.

Everyone else, let’s take a look at a frustrating trend of late. Andy Dalton’s growth seems to be stunted right now. He seemingly exists in a strange world of necessary quarterback equilibrium, where each positive outcome must be balanced by a negative outcome instead of doing good thing after good thing. His coaches, particularly offensive coordinator Jay Gruden, seem to understand this and want to help. For most of the season, Gruden took the hands-off approach and let Dalton work through his mistakes. The team managed to overcome a good amount of them and emerge as the team-to-beat in the AFC North. Then the injuries began piling up around Dalton, namely on the defensive side of the ball, and the team’s performance became less consistent. Not coincidentally, Dalton’s play has suffered as well and the Bengals coaches, in seemingly an attempt at limiting the mistakes he seems wont to commit, have tightened the reigns on Dalton. Last week, he used playaction more than he had all year and it proved successful. This week, though, with the team playing catch-up almost immediately, there was a strange emphasis on short, quick passes. The coaching staff appears to be vexed about how to handle to Dalton moving forward this season and just how much responsibility he should shoulder during the stretch run. These next two games are in Cincinnati, and the Bengals haven’t lost a game on their home turf this season. So hopefully the coaching staff can find some measure of confidence in their quarterback and hopefully their quarterback can find some measure of confidence in himself. Because if not, it is very difficult to see this team advancing in the playoffs. They need Andy Dalton to be an exceptional quarterback for a playoff run.

Welcome back, eternal optimists. Typically when analyzing film, there are a few plays I know I could break down if something else that I’m working on falls through. Sunday’s loss was perhaps the most difficult game to find a play that actually merited analysis. That’s how unexciting the Bengals were. The offense was miserable and took until halfway through the third quarter to reach 100 total offensive yards. The longest run of the day was nine yards. And it was by Andy Dalton. The defense wasn’t much better. After forcing a punt on the first series, here are the results of the next five drives: TD, TD, TD, FG, FG.

But I managed to sift through the awfulness to find a glimmer of hope, a candy cane in a Christmas tree full of insects, a snippet of sobriety in a sloppy office Christmas party. I just had to harness the man that inspired this blog, Mr. Geno Atkins.

The defensive line has struggled to produce consistent pressure on the quarterback without Geno. And while Michael Johnson has been disappointing, his counterpart has been consistently strong. Carlos Dunlap is as physically gifted as any defensive end and has begun to harness his uncommon strength and speed, including a play he made in the fourth quarter that the Bengals had to have to preserve the tiniest hope of a comeback. 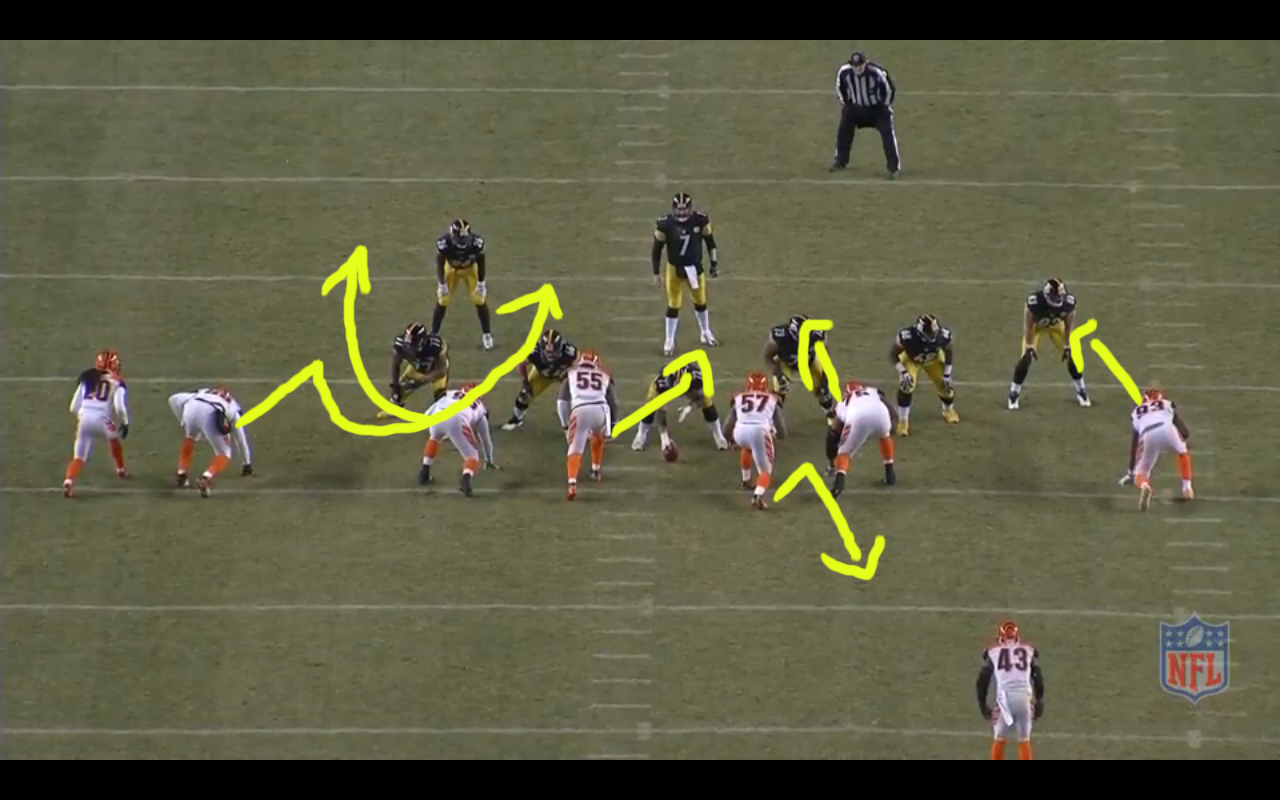 Here, Dunlap runs one of the stunts that Mike Zimmer is so fond of. If you’re mind has been scrambled by Andy Dalton interceptions or sour eggnog, allow me to refresh you about the basic idea of a stunt. The inside player rushes to the outside, drawing the interior lineman with him. The outside guy fakes upfield, loops inside, and forces the quarterback out of the pocket.

Dunlap is teamed with stunt specialist Wallace Gilberry, who ran this frequently on the opposite side with Michael Johnson in the time BGI (Before Geno’s Injury). Against a quarterback like Ben Roethlisberger, who loves to make plays out of the pocket, it’s important to make sure that the upfield rusher, in this case Gilberry, cuts off any opportunity the quarterback would have to break outside. 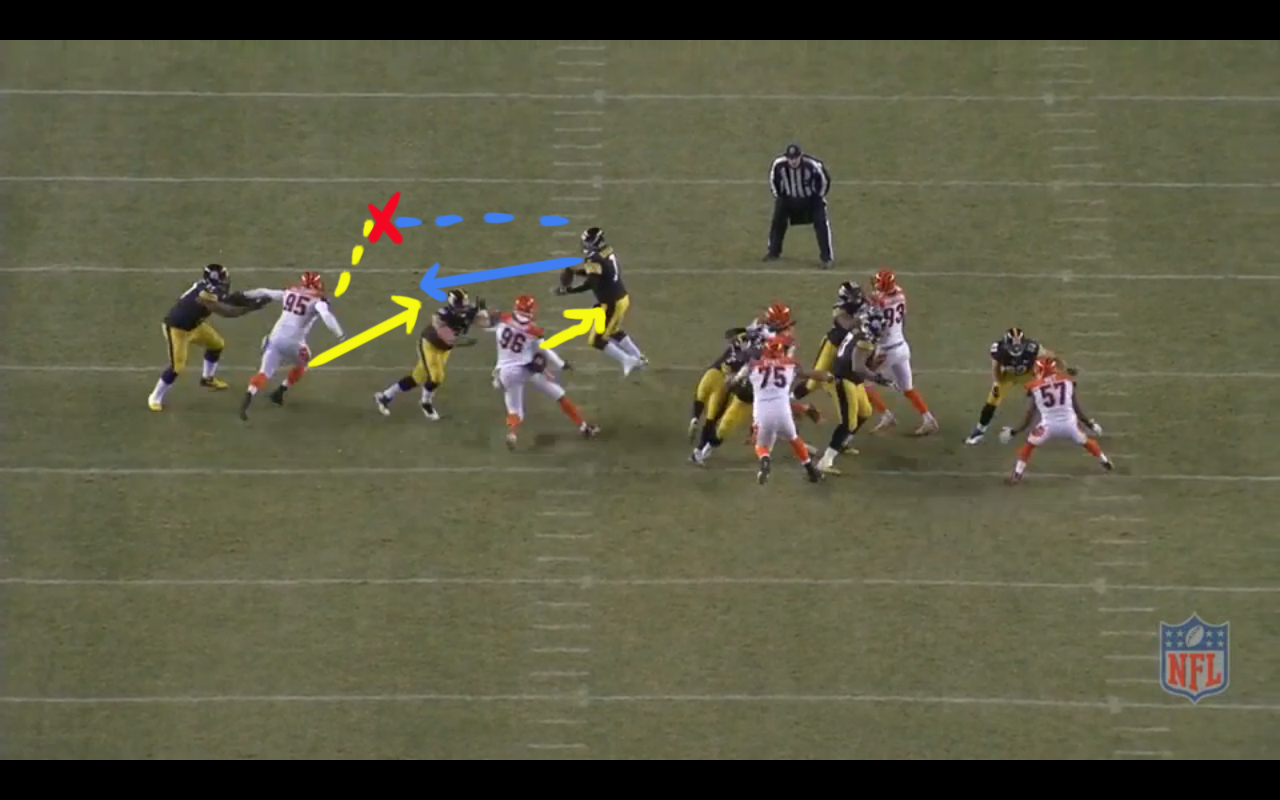 Dunlap forces Roethlisberger to step up in the pocket and into the waiting arms of the Bengals team leader in sacks, Mr. Wallace Gilberry. (Side note: that’s what he’ll be referred to by Bengals management when they are trying to play hardball with Michael Johnson’s contract negotiations this spring. Though that’s assuming there are negotiations.)

So there you have it, my Christmas gift to you all – finding a stretch of soft snow to sled down amid a sea of treacherous, icy hills.