Home Sports When Geno Attacks: Week 14 and the Return of Good Andy

Hey buddy, welcome back to football! You had us worried there for a little while. You can’t do this to us; you know how sensitive we can be about our quarterbacks. I hope you are relaxed during your brief hiatus. (Also, next time, a heads up would be nice. Just so we can schedule weekly therapy appointments.) But since you have been experiencing nature in complete seclusion, we thought we’d enlighten you as to a few things that have happened since you departed on Halloween.

– The Jacksonville Jaguars won a game. A real, live football game, against all odds. Then they decided they enjoyed it, so they won three more!
– Josh Gordon became the human embodiment of a pterodactyl-gazelle hybrid and no one understands how to cover him. It feels weird not having A.J. Green be the most dominant wide receiver in the state of Ohio.
– Mike Tomlin stepped on the field of play, maybe on purpose or maybe accidentally, and it may have altered a drive that ended up in a field goal anyway and the NFL might have decided that it will take a draft pick away from the franchise because of this. And everyone decided to lose their marbles saying what the punishment should be for, like, three days and the internet had their yucks with memes a’plenty.

And that’s basically what you missed from the league. But now, we have the unfortunate news of delivering your replacement’s performance review. Your replacement proved to be an unacceptable quarterback for four straight weeks. There were times where he feigned competence, such as a bizarre 93-yard, three touchdown and two interception game. But the more prevalent performance was that of a confused, lost passer. He did a poor job of recognizing open receivers before a play. He was too eager to get rid of the ball, thus missing open receivers and forcing passes to covered receivers. He made bad decisions more often than he made good decisions but, luckily, the team did not suffer much because of them.

Your team maintained a 2-2 record during your absence, sir, but you have returned at a critical time. You see, the rest of the AFC North is not particularly good at football and your team has a chance to actually clinch the division title with two weeks to spare. Two weeks of not thinking the sky is falling! Do you know what that could do for this city? And if Tom Brady and friends struggle a little, you may be actually be in a position to secure a first-round bye!

Please, make yourself at home, Good Andy. And don’t leave us like that again, mister!

The concerned citizens of Cincinnati

I didn’t believe the concerned citizens of Cincinnati when I first read this letter, but in re-watching Cincinnati’s game against Indianapolis, I can concur with the facts: Good Andy Dalton has returned, for at least one game. After a particularly poor four-week stretch that saw Dalton throw nine interceptions and just six touchdowns, the quarterback the organization hoped they had drafted in 2011 re-appeared. Dalton finished 24/35 for 275 yards, 3 touchdowns (plus one rushing) and, maybe most importantly, no interceptions.

So what caused the reappearance of Good Andy Dalton? Well, there were a few adjustments made, and they begin with offensive coordinator Jay Gruden. Gruden has been generally received well over his time in Cincinnati, but his play-calling did no favors to Dalton while he was struggling. His calls were fairly unimaginative and predictable, but against the Colts, he made a few significant changes that seemed to work.

One is that he used the play-action fake far more against Indianapolis than he had all year long. According to Pro Football Focus, Dalton ran a play-action fake on 37.8 percent of his drop backs, a 20.1 percent increase over his season average. I’ve been writing about Dalton’s need to stay in the pocket and both wait for receivers to get open AND use his eyes to move defenders when he needed to. Well, another way to accomplish the same goal of opening up space for your receivers is by getting defenders to bite on the play fake. Gruden did a solid job of calling more play-action passes, and they worked well against a subpar Colts secondary.

The play-action was aided, of course, by a productive running game. Giovani Bernard rushed for 99 yards and BenJarvus Green-Ellis plodded for 48, forcing the Colts to respect the run early. (Sidebar: It is painful to watch BJGE trudge through the gaping holes created by the offense. And even more painful when you consider what could have been from a play had Gio been in there. I would break it down on film, but it would make me yell at Jay Gruden.)

But the most important reason for Dalton’s resurgent week was simply that his receivers were open. Like, REALLY open. 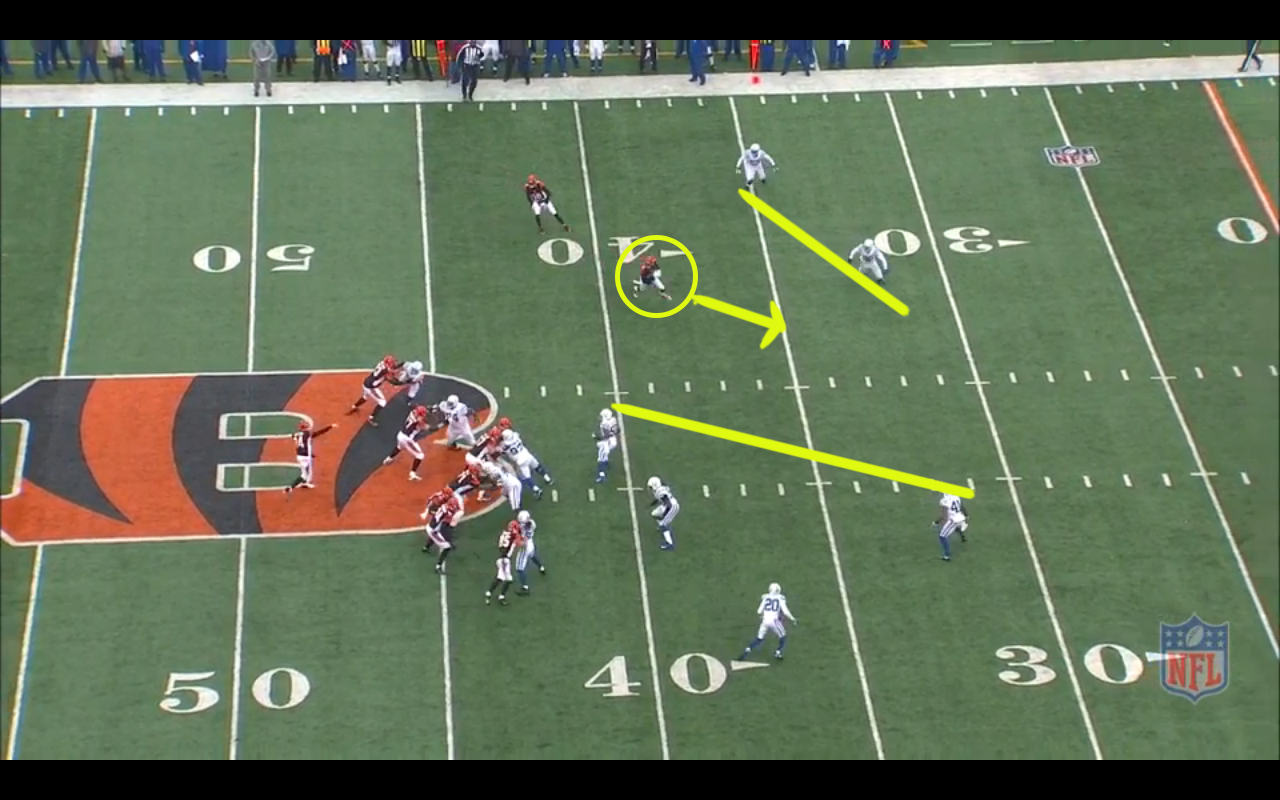 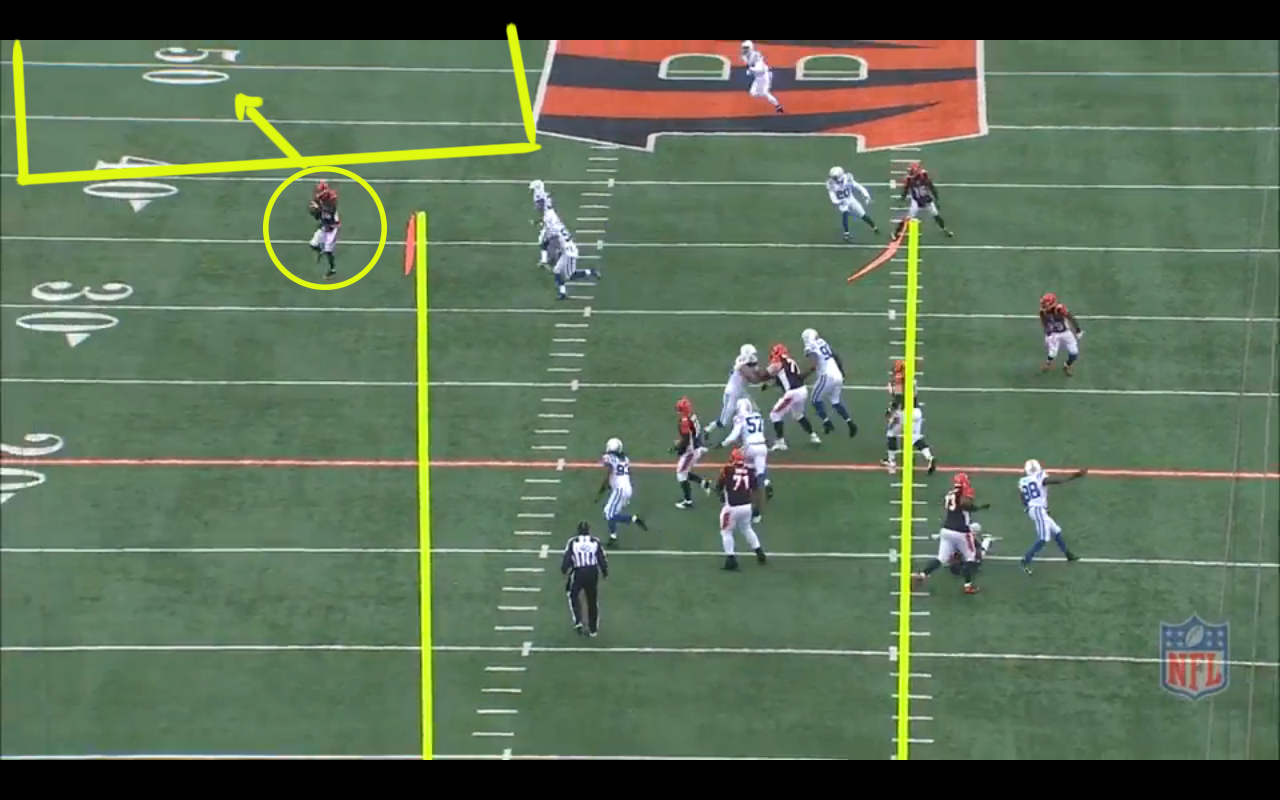 Not quite “like white on rice” coverage out there by the Colt defenders. 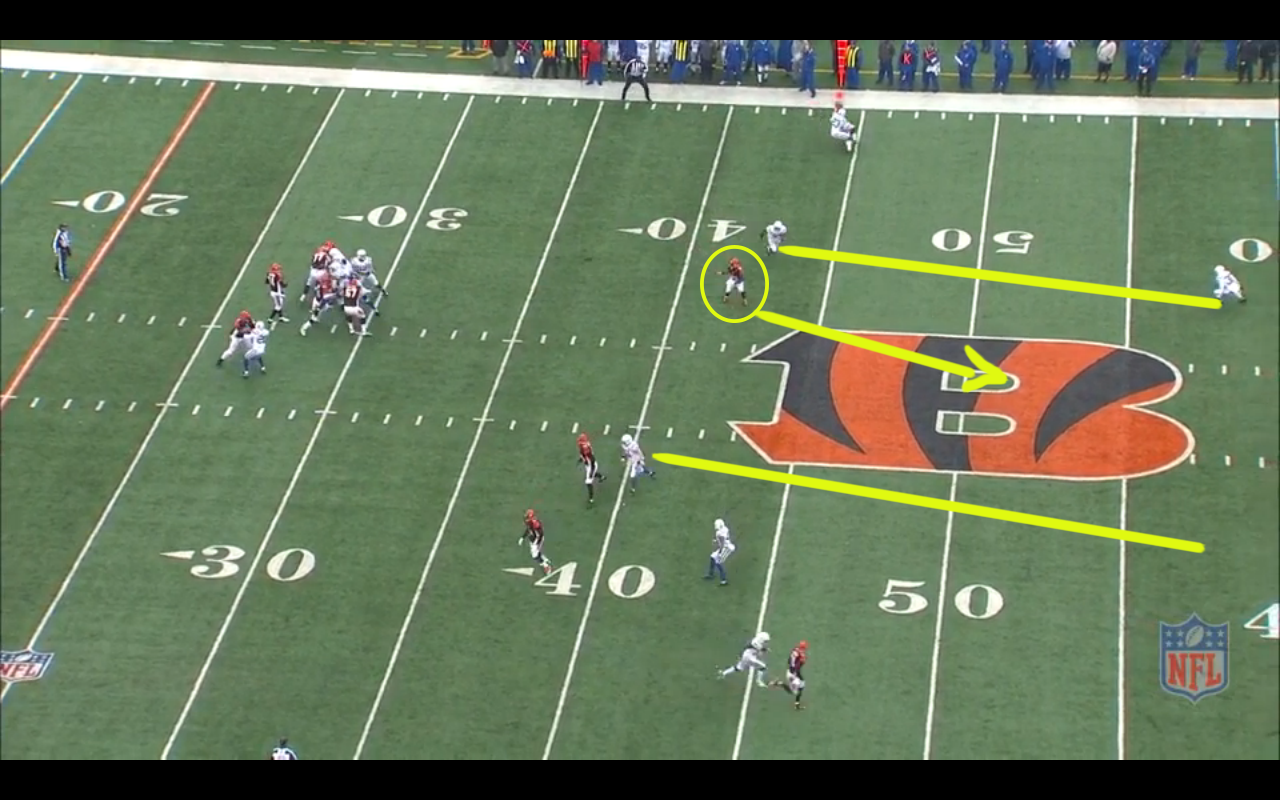 Look, I don’t want to take away from Andy Dalton’s day. In fact, I’ll even throw him a bone. The touchdown pass to Marvin Jones was a lovely decision. It was the same play I diagrammed last week, just run on the opposite sideline. Similar to last week, Dalton looked down the seam, drawing safety LaRon Landry two steps away from Jones. Jones has a step on his man, much like he did last week, but this time Dalton lays the ball out ahead of Jones, and he is able to haul it in behind the receiver instead of fighting for the underthrown ball. A beautiful throw and catch.

All I’m saying is that Dalton did not face much resistance in this game. He had only five snaps where he was under pressure and he seemed comfortable in the pocket instead of feeling the phantom pressure that had hindered him in previous weeks. Now, it’s when there is actual defensive pressure that we need to see Dalton have a great performance.