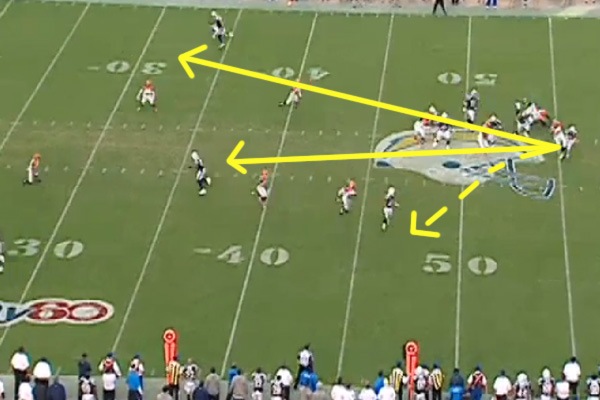 Last Sunday’s trip to San Diego yielded a modest statistical line for the one-man wrecking crew who is quickly become something of a cult hero among students of game tape and statistical nerds alike: Mr. Geno Atkins. His line against the Chargers—3 total tackles, 1 solo, half a sack, and one quarterback hit for good measure—was not quite the gaudy production that has become routine for Geno. An uneducated fan would be curious and tempted to question why Atkins was not more effective against a statistically average offensive line.

You see, Geno was simply playing coy in the first half. Maybe he wanted to bait the interior lineman to set them up for a quick move, sure to result in a new pair of underwear for eminently flappable Philip Rivers. Or perhaps he wanted to even out his tan in what was a picturesque Sunday afternoon in southern California. But the reason for Geno’s pedestrian first half did not worry me one bit. In fact, it just assured me that he would move and attack in ways that would make Warren Sapp proud in the second half.

That is where we begin this week’s tale of “When Geno Attacks: San Diego Chargers Edition.”

The origins of this play are pretty ordinary. The Bengals only rush four while the Chargers keep a tight end in to block, leaving the center and left guard to double team Pat Sims while the left tackle and guard are left to double Geno.

Ah the swim move, a classic defensive maneuver. It leaves the lunging right guard Louis Vasquez blocking the warm California air while right tackle Kevin Haslam scramble to make sense of Geno’s wizardry. (You may a recall similar scene last week when Khalif Barnes was reduced to the worst possible impersonator of a tumbling Gabby Douglas.)

This causes One Direction-like (they’re a thing, no?) hysteria from the right side of the line. As Atkins rumbles toward Rivers, his two primary blockers AND tight end Randy McMichael stare helplessly. Usually the next move would be for Atkins to pummel Rivers, but as the tiny yellow circle in the previous photo shows, Haslam snags Geno’s jersey to prevent further damage.

Now that Atkins has escaped, he has a clear path to Rivers. It appears that Rives is looking to his right, but the veteran is still very much aware of the pain about to be inflicted if he doesn’t deliver the ball quickly. Thanks to Geno’s pressure, Rivers is focused on avoiding contact rather than delivering a catchable ball. Don’t believe that Rivers is scared?

You know how people talk about how important it is for quarterbacks to have pocket presence and be able to stand strong in the pocket, even when you know you’re about to get tagged? This is the exact opposite of that. Rivers is instinctually cowering at the thought of Atkins hitting him. If he wasn’t, he’d be standing up straight and seeing the play through.The best part of this play though? Geno doesn’t even touch him. He may lay a finger on him at the end, but that was not what Rivers was prepared for. Geno Atkins made a grown man, who gets paid to withstand pressure 16+ times a year, cower at the thought of a Geno smash. That, my friends, is respect.

And as this last photo illustrates, that pressure, which forced a harmless incompletion to Ryan Mathews in the flat, prevents Rivers from looking downfield at potentially open targets. Both receivers were well-covered, granted, but a well-thrown ball could have resulted in a big play for the Chargers. But with Geno Atkins lurking, a dump-off pass seems like a better option.

Beware, NFL quarterbacks. Geno has incepted all of you. You just don’t know it yet.