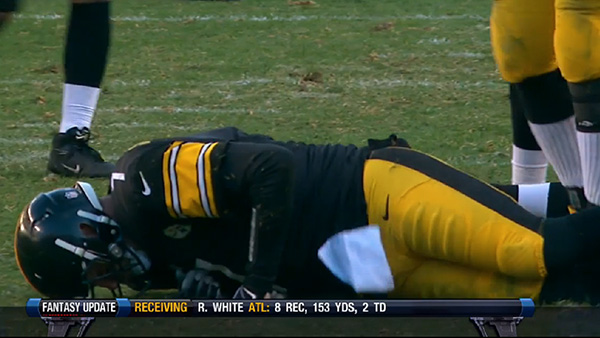 Last week, the Bengals bumbled their way to a 24-17 win in an ugly game that featured second-stringers putting some good tape on their highlight reel. A.J. Green had two targets, the offense managed just nine first downs, and Geno Atkins had only three tackles. It would be an injustice for the final regular season When Geno Attacks to chronicle a relatively meaningless game, so instead I summoned the courage to relive the last meaningful moments of the Steelers’ season and find out how it all went wrong. Unfortunately, I knew exactly where to start.

With the tip of my tongue in my cheek, I wrote that Atkins’ disappearance from the box score against the Eagles in Week 15 was a calculated measure. Why, I thought, would Atkins want to show anything before the season-defining game against the Steelers the following week?

I wrote it, but only half believed it. The other half of me was hoping that, somehow, it would be the start of an unproductive series of weeks for the Pro Bowl defensive tackle. I mean, after all, he has to eventually slow down and produce mortal numbers, right? Stat heads harp all the time about regression to the mean. Maybe this small sample was part of a mini-regression?

It proved to be wishful thinking at its most desperate. I knew that if Atkins had the kind of game I had watched him have so many times this season, my Steelers would be in serious trouble.

A few days before Christmas, my worst fears were realized. Geno Atkins dominated the Steelers offensive line for most of the game, pressuring Ben Roethlisberger and disrupting the entire passing game. There were rare spurts where Atkins was contained on running plays, but his stat line paints the portrait of his performance accurately: 6 tackles, 1 TFL, 2 sacks, and 1 forced fumble.

What really stood out for me, though, was that the Bengals needed every statistic Atkins’ registered. The numbers were not stat-sheet stuffers—they were impact plays that altered each drive.

After a week or so of wallowing in sorrow while listening to an unhealthy mix of Jeff Buckley and Verve Pipe, I worked up the courage to rewatch the game that ostensibly ended the season for my Steelers. I cursed at the TV, bemoaned turnovers, and experienced the horror that happens When Geno Attacks your favorite team.

With the game tied and a pivotal third down upcoming, Geno lined up across from rookie guard David DeCastro, who was making just his second start of the season after missing the first 14 weeks with an injured knee. Now, popular opinion was to blame DeCastro for all of Atkins’ success, but that is not entirely accurate. DeCastro actually performed admirably in run blocking, winning one-on-one battles against Atkins a few times to spring runs. In pass blocking, however, he was a matador, waving Geno the Bull through to the quarterback. But hey, he’s a rookie.

A common misconception among those not in the know when it comes to predicting individual battles in the trenches is that the bigger, more powerful man will win. But Atkins, who stands just a shade over six feet tall, consistently proves the coaching adage—the low man always wins.

If you zoom in on the photo, you can see how Atkins beats DeCastro immediately after the snap. He uses his leverage and size to his advantage. Atkins dips his right shoulder and rips his right arm up, giving him the leverage he needs to push past DeCastro, who is five inches taller than Atkins, and squeeze through the hole between the right guard and right tackle.

When Geno breaks free from DeCastro, running back Isaac Redman has a chance to toss a block before heading into the flat to be the safety valve, but he decided that ignoring a charging rhinoceros with sights set on a $100+ million investment would be a better idea. (I had photo evidence of this but Geno must have used his wizardry for evil and corrupted the file.)

After barreling past the rookie and scaring off a running back, Atkins has a free shot at Roethlisberger. He launches into his upper body while Wallace Gilberry lunges at his legs, creating a collision that looked like something out of Celebrity Deathmatch. (Also, you probably don’t want to click that link unless you have somewhere in the neighborhood of 4 hours to spare watching YouTube clips. It will suck you in.)

That photo sums up my feelings, too. Thanks a lot, Geno.