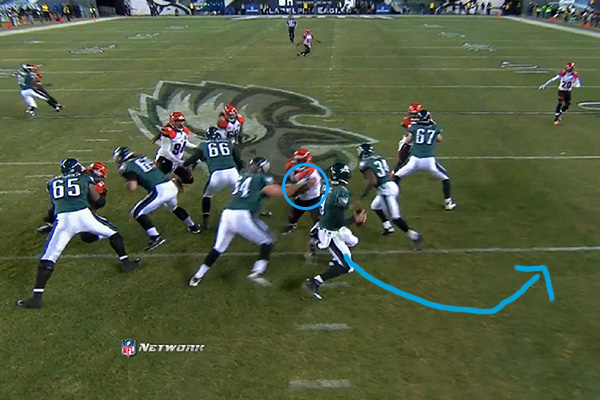 The greatest trick the devil ever pulled was convincing the world he didn’t exist.
–  Verbal Kint, The Usual Suspects

It has become commonplace to peruse the box score after a Bengals game and see the destruction our favorite punishing defensive tackle, Geno Atkins, has imposed. He’s put up some eye-popping numbers at times this season (6 tackles, 1 sack, 2 FF at Kansas City) as well as stat lines that did no justice to his dominance (3 tackles, 1 sack vs Oakland). Last Thursday, in perhaps the least impressive 21-point victory in recent memory, Atkins put up the dreaded bagel: zero tackles, zero sacks, zero forced fumbles—straight goose eggs across the board. It was the first game that Atkins did not register a statistic since Week 14 in 2010, his rookie season.

So maybe you thought there would be a chance that this space would be empty this week, that with no statistics, there would be nothing to say. Well you would be wrong. That’s what Geno WANTS you to think. With a season-on-the-line game coming up against the Steelers, why show them more than he needs to?

And have we not learned anything from the myth of Geno Söze? Just because Atkins does not exist in the box score does not mean that teams did not (or should not) fear his presence.

In reality, though, it was not Geno’s best game, largely because it did not need to be. He didn’t play as many snaps as usual (only 43/56). And when he was on the field, he was asked to control the middle and contain Bryce Brown more than he was asked to rush the passer. But when he did get that chance, he made an impact despite what the box score suggests.

Don’t believe me? Well, I give you this week in “When Geno Attacks.”

Following a silly Carlos Dunlap penalty (proving the popular notion that Dunlap may not have the sharpest football mind), the Eagles had a first and 10 near midfield. At this point, the Bengals were down by three and looking vulnerable against a depleted Eagles squad. That’s when our hero decides that it’s time to make a play.

Atkins is lined up across from the human tackling sled, right guard Jake Scott. Over the past few weeks, Atkins has beaten his defenders with Phelps-ian swim moves and ballerina-like agility, but against Scott, he uses the “I’m a lot stronger than you” approach. It works to perfection.

Here, Atkins has taken the advice of Missy Elliott and put his thang down (in this case, his head) and reversed the course of Scott. You know how cheesy football coaches in movies harp about how the low man always wins? Well, it’s accurate and it is proven here. Atkins uses his leverage to lift Scott like the tackling sled that he is, driving him into the backfield, which leaves Scott with no choice but to…

…hold Geno. Here is where the statistical argument enters the fold. Let’s say that, on average, Geno is held 1.5 times per game. In reality, he is held much more than that, but maybe that’s how many the referees see. (Note: the 1.5 number is purely speculation on my part after watching most of his defensive snaps this year. Could be more, could be less.) Each of those holding penalties results in a 10-yard loss but not a loss of down, so the plays are not quite as valuable as a sack. They do, however, hold a very real value and should be incorporated regularly into statistics.

Of course, the fellas at footballoutsiders.com do have a stat for this, which is updated at the end of each season. Last year, Miami Dolphins defensive end/outside linebacker Cameron Wake drew 13 holding penalties, including eight on pass plays. If you give him something around half a sack for each holding penalty drawn, that bumps his season total from 8.5 to 12.5, which would be seventh in the league as opposed to 26th.

I’m not sure how many penalties he has drawn this year, but I fully expect Geno to be near the top of that list at year’s end. And when he is, we can fill in this box score so that he is no longer part of Club Tril.

If you want to delve deeper into Adam’s football mind (and mind in general), check out his podcast, where this week, he previews Sunday’s Bengals-Steelers matchup and much more.