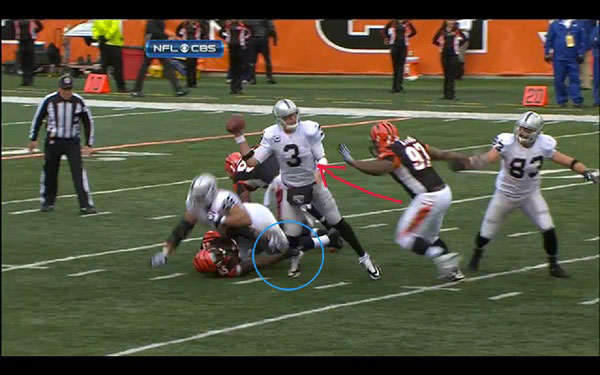 Last week, we took a look at Geno the Powerful, the defensive tackle who has been known to flick offensive linemen out of his way as if they are pesky insects. He demolished Poor Jeff Allen, an overmatched rookie on the worst team in the league. It was hardly a test for the best defensive tackle in the NFL.

The Oakland tandem anchor—or, perhaps, loosely tie together—the right side of the Raiders offensive line, with Brisiel at right guard and Barnes at right tackle. On the surface, they seemed to have a better chance of containing Atkins on Sunday. The duo has a combined 13 years of experience, and they’ve graded out unofficially as “not horrible” according to Scouts Inc. (Though to give Barnes credit, Scouts Inc.’s analysis of him does include the phrase “decent knee-bender.” So there’s that.)

But Geno was well-aware of the experience across from him and decided to dust off his ballet slippers (because he’s THAT secure in his masculinity), using his Black Swan-esque agility to embarrass the opposition.

Here, Atkins is lined up between Brisiel and Barnes. The plan for Brisiel is easy­­—get a quick punch on Atkins to knock him off his course, feign run blocking to sell the play action, and block any linebackers coming up the middle. Barnes is charged with containing Atkins after Brisiel. The photo shows Barnes moving the entirety of his sizable mass to his left, making him very susceptible for Geno’s next move.

SPIN MOVE! Geno pirouettes to the left, leaving Brisiel, who is unable to get a clean punch on him, crumpled in a heap. Barnes is right behind Brisiel after falling victim to the spin move and wobbling like a bowling pin. This leaves Atkins with an unabated path to old pal Carson Palmer.

Tight end Brandon Myers now has a precarious decision. Does he maintain his block and leave Atkins, who is salivating at the thought of beheading Palmer? Or does he take Atkins and leave Dunlap alone? It’s Sophie’s Choice for the overmatched Myers. As the photos show, he is literally torn between which defender to block.

Myers chooses Door A: Blocking Geno. A smart choice, even if it was to be ill-fated. (Though Myers deserves some credit for doing a good job of disrupting Dunlap’s path to Palmer, something Brisiel could not do to Atkins.) This leaves Dunlap stumbling toward Palmer, who is now forced to step up in the pocket, where Geno is waiting.

(Also, if you were wondering what Khalif Barnes is doing at this point, he is still plopped on the ground, tripping his teammates.)

And now Palmer is out of options. Geno quickly sheds Myers’ block, forcing Palmer to take a step back and giving Michael Johnson a chance to snag Palmer’s ankle. Johnson gets credit for the sack (despite being smothered by left tackle Jared Veldheer) but the play is made by Geno Atkins. (And don’t worry—Khalif Barnes is still on the ground.)

We have now seen Geno the Powerful and Geno the Nimble attack quarterbacks. What will we see next week against Philip Rivers and the San Diego Chargers? We assume Rivers has spent the past few sleepless nights wondering the exact same thing.