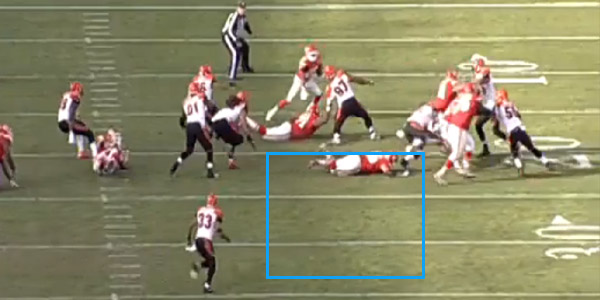 As Chiefs rookie left guard Jeff Allen awoke last Sunday morning, he probably ate a couple bowls of cereal, maybe a Denver omelet or two, looked over the crayon drawings in Romeo Crennel’s playbook, and cleared his head before taking the field. On most days, that would be enough preparation for a day’s worth of pushing and shoving 300-pound men.

The poor kid had on idea what he was getting himself into.

That very same morning, guests staying at the Bengals hotel in Kansas City reported seeing a man consume a 64-ounce porterhouse, polish his musket, and bench press a Volkswagen, just before dawn on Sunday morning. That man was the 300-pound behemoth known to Bengals fans as Geno Atkins. (Those reports could neither be confirmed nor denied.)

Atkins has emerged as one of the NFL’s premier defensive tackles. He’s registered 34 tackles, 3 forced fumbles and 8 sacks, more than any other DT this season. And while his numbers are impressive, they belie his overall impact on the defense. Atkins flicks grown men around like weeble-wobbles, generating disruption in the backfield with uncommon regularity.

So, inspired by Atkins’ dominance, I present to you this week’s installment of Geno Scares the Bejesus Out of an Offensive Lineman.

The Chiefs line up in a basic Power-I formation. The play is supposed run to the left with the fullback leading Jamaal Charles through the 7 gap (between the left guard and left tackle). Atkins, lined up across from Allen, has other plans.

The moment Charles receives the handoff, Atkins has blown the play to bits. He bulldozes Allen three yards behind the line of scrimmage less than two seconds into the play, tripping up lead blocker Nate Eachus in the process. Charles is forced to make a banana cut to avoid the log jam caused by Atkins’ penetration.

Oh, poor Jeff Allen. The young fella is now four yards behind the line and being tossed into his own running back. It’s a reverse pancake for Atkins and oodles of emasculation for the rookie.

Poor Jeff Allen (as he will be referred to from now on) has been reduced to a beached whale, flopping on the ground while blindly grabbing for anything to prevent Atkins from smothering his running back. He snags Atkins’ left shoulder and does his best to yank him to the ground. (Which, you know, is not really allowed. But Gene Staratore’s crew was otherwise occupied, I suppose.) Plus, Atkins’ penetration is especially important because…

Without Atkins blocking his path, Charles has a 12-yard swath of grass to bolt through. (You can also see the holding penalty a bit clearer in this photo.) It is Geno’s pursuit that allows the other defenders to shed their blocks and clean up the play.

After dancing around for a second, Charles manages to eek out a two-yard gain before Domata Peko brings him down. (Though it should be noted that Michael Johnson missed an opportunity to tackle Charles for a loss.)

This has been this week’s Geno Scares the Bejesus Out of an Offensive Lineman. Make sure to tune in next week as Atkins works to deliver an unfriendly welcome to old pal Carson Palmer.

Adam Flango is a producer for Pro Football 360 on cbssports.com. He is a diehard Steelers fan that is writing this (partially) out of gratitude to the Bengals for parting ways with Dick LeBeau. You can follow him on Twitter @adam_flango.