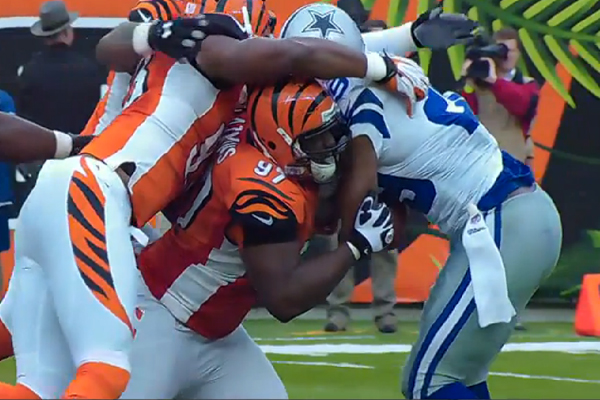 Between grooving to cherubic Christmas carolers such as Dean Martin, Josh Groban, and the penultimate seasonal siren Ms. Amy Grant, as well as catching up on the story behind this Abu Nazir fellow that seems to have everyone in the CIA mighty worried, I caught my first live Bengals game of the season. I’ve been writing about the team for over a month now, but living in the Miami television market does not afford me the luxury of watching the Bengals play on a regular basis. Instead, I’ve been watching the tape, which is a good way to objectively analyze the game without being swayed (or, more likely, distracted) by annoying announcers or fan cutaways.

I knew when I flipped on the game that Geno Atkins would be fun to watch live. If he’s so enjoyable to study after the fact, it stands to reason that experiencing his dominance would be even more enjoyable while it is happening. It’s kind of like the difference between listening to the Foo Fighters on your iTunes and watching a concert on Palladia. In essence, you’re experiencing the same thing but through different prisms.

The long-winded point I’m making is that it was highly entertaining watching Geno dominate the Cowboys guards while reducing the announcing duo of Thom Brennaman and Brian Billick to giggling schoolgirls talking about the cutest boy in 7th grade. Geno was marvelous on Sunday, overwhelming the Cowboys with his scary combination of speed and power. He continues to remind me of a smaller, quicker Warren Sapp. There is that same motor and productivity in the sack department from a defensive tackle that Sapp had, and if I still played Madden, I imagine that I would be able to rack up a minimum of five sacks per half with a few well-placed B+R-Stick combos.

In this space I have likened Geno to mythical figures and have come dangerously close to nominating him as Zeus’s successor on Mount Olympus. Then I realized that offensive linemen are often referred to as a “mountain of a man,” so Geno would likely tunnel right through Mount Olympus and resurface in a world filled with green fields, Cardinals quarterbacks, and a sky filled with one star for every lineman he eviscerated this year. (So he basically would have all of the stars.)

But since Geno was wearing his PF Flyers against Dallas and his stat line speaks volumes of the kind of day he had (final line: 4 tackles, 3 TFL, 1 sack, 3 QB hits), I’m going to write with lightning speed, just like Geno, and try to limit myself to one sentence between photos.

Without further ado, I present this week’s edition of “When Geno Attacks: Dallas Cowboys Edition.”

Murray makes the foolish mistake of blinking, giving Geno time to go Christmas shopping, bake some holiday cookies, and then destroy the running back. Time from snap to tackle? 1.8 seconds.

You can’t tell from the photos, but after the play, Michael Johnson erupts from the pile in a fit of hysteria and elation, like he had just felled the walls of Troy himself. Meanwhile, Geno walks back to the huddle, showing nary the glimpse of a smile. He waits stoically, preparing for yet another attack.