When Geno tore his ACL last week, I knew I would need a new muse, someone who I could fixate my attention on and dissect their every movement each week. There were nebulous criteria floating around in my mind as I decided which player would best serve this exercise. Things like: Are they the best/worst at their position? Is it more effective to point out when people do things right or wrong? Do people really want to read more about defensive linemen? A.J. Green was quickly eliminated because of one main factor: it is not particularly interesting to break down what receivers do on passes, nor is it easily visible on game film. Then I thought about choosing another defensive player, but with Leon Hall out for the year, there really wasn’t anyone else worth analyzing all that much. (If you need your defensive fix though, re-read Michael Johnson’s brief cameos in “When Geno Attacks” earlier this year. He’s doing the same stuff, just less effectively since Geno is gone.) Offensive line was intriguing…until I realized that they are offensive linemen. Running backs would afford me the opportunity to look at Gio Bernard, but it would also turn me into John Nash, trying to decipher some sort of explanation as to why he is not getting the ball so much more than BenJarvus Green-Ellis.

Which leaves me with the enigma that is one Andrew Gregory Dalton. The quarterback is prone to follow up a play or game that makes you believe Cincinnati may have hope as a football town with a throw or performance that makes you curse to the gods of Akili Smith. There’s a dichotomy inherent in his performances that is so weirdly perplexing that it begs to be analyzed further. So for the next few weeks, I’m going to do my best to understand Andy Dalton. (Also: I’ve issued myself a challenge to use redhead jokes as sparingly as possible. I will most certainly fail in this regard.)

Let’s start with last Sunday against the Ravens. Before we dive into lambasting the poor fellow for doing seemingly everything in his power to lose the game, I’d like to make a few points to explain his abysmal performance.

Point 1: The Ravens were not bad defensively, particularly the defensive backs. Green drew double coverage nearly every play and a relatively small number of blitz packages allowed them to have seven or eight men in coverage regularly.

Point 2: His receivers did not help him much. Now granted ,they weren’t exactly delivered the ball on a silver platter, but they have to help the guy out a little bit. Marvin Jones letting Lardarius Webb snag the ball away from him for an interception was unacceptable.

And that’s about where the defense of Andy Dalton ends.

What Dalton really struggled with is patience and pocket awareness. You know in Madden how you play those mini-camp games to boost your QBs pocket awareness, except you never really understand what that does to help him? (Also, I’m assuming you’re like me and haven’t played a new Madden since 2008. If my reference is antiquated, apologies.) Well, Andy Dalton could have used some of those mini-camp drills. Quarterbacks have the incredibly difficult job of being aware of what is going on in the 2-foot radius around them as well as what is happening on all other parts of the field. It’s really more of a pre-ordained ability than a job; I find it difficult to believe someone can, over time, acquire the ability to sense when danger is imminent. But there’s a flip side to understanding when you are about to get hit—knowing when you are NOT going to get hit. Knowing you have an extra half a second to wait for a receiver to get out of his break can be the difference between a check-down or throw-away and a 15-yard out-pattern completion. Dalton has never been particularly good under pressure and, frankly, few quarterbacks are. But to be bad under no pressure at all is very worrisome. Let’s take a look at what I’m talking about with a few poorly thrown balls. (Quick note: if you want to look at a good read and throw, go to 3:54 in the first quarter. Good read, terrific throw.) 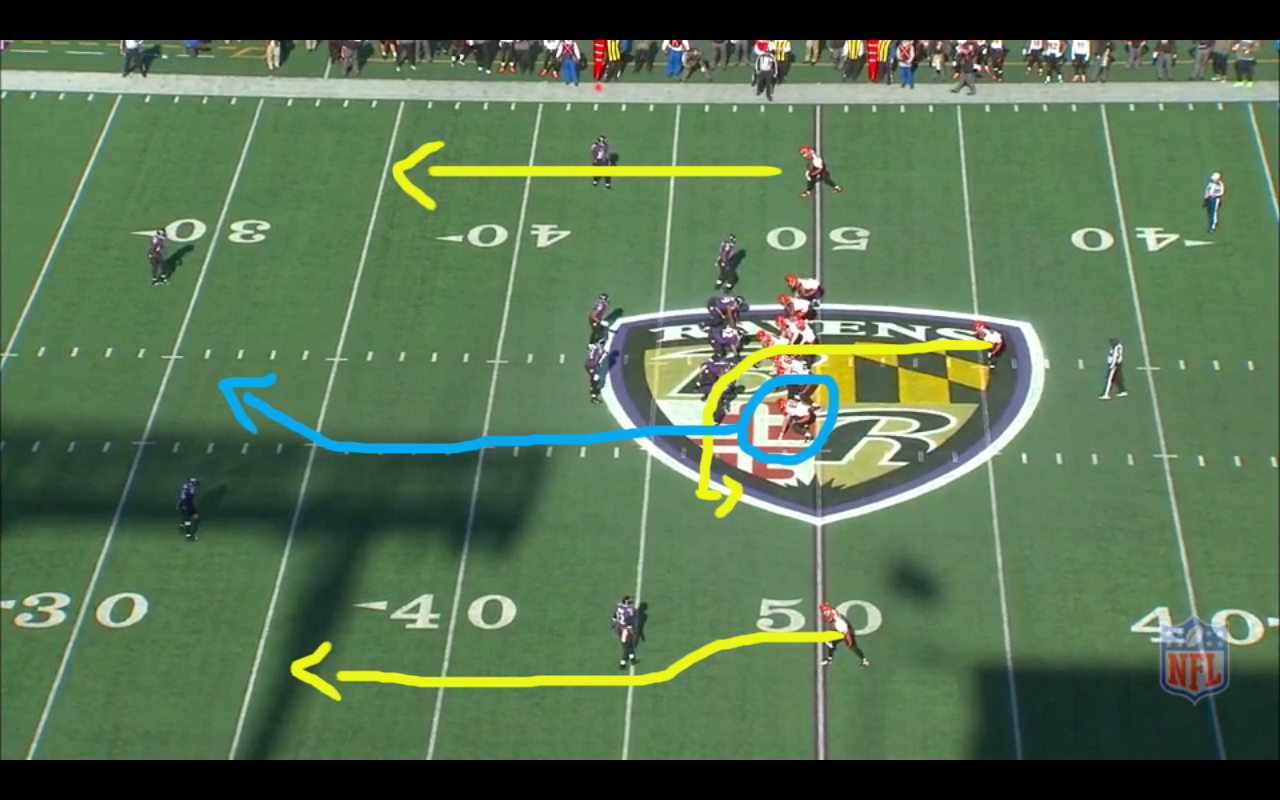 Here is a seemingly innocuous play that results in an incompletion to Marvin Jones down the left sideline. But what I want to focus on is Tyler Eifert. The rookie has been worked into the gameplan slowly by Jay Gruden, but with Jermaine Gresham injured last week, he was able to see the majority of the action. Against the Ravens, he was targeted 10 times. This is a play that he should have been targeted on but wasn’t.

A.J. Green (top) and Jones (bottom) are running go-routes down the sideline. They are getting man-to-man coverage by the corners with help over the top from the safeties. Dalton should be able to recognize that passing it down the sideline is going to be difficult. You know how announcers always talk about looking off receivers? That’s what Dalton could have done on this play. He is looking to the left from the beginning of the play, drawing the safety on that side of the field toward Jones. The linebackers are lined up in a zone around the first down marker, aimed at preventing anything thrown in front of the line-to-gain from crossing it. 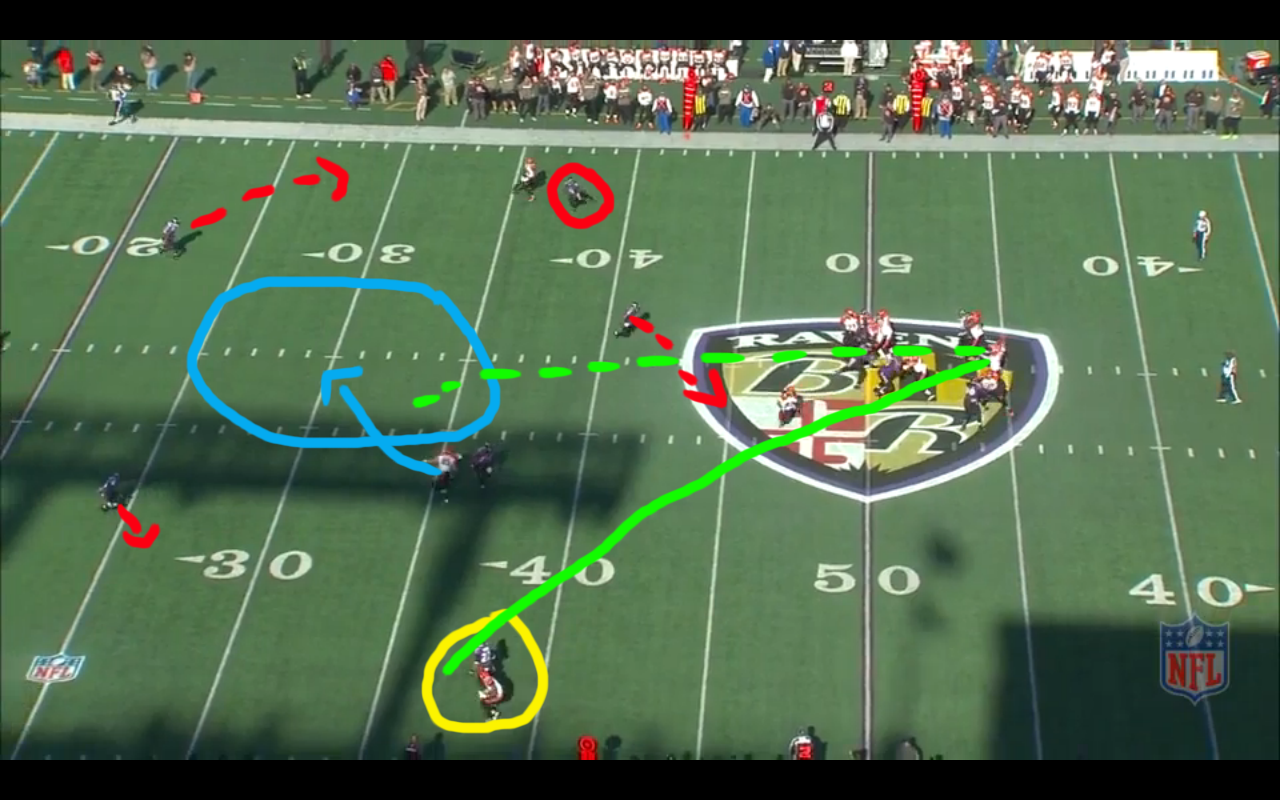 So what does Andy do? Well, if you guessed pass the ball deep and out of bounds to Marvin Jones, you are a winner! You can see here where each defender is headed. The safeties are looking to the sidelines, the linebackers are playing zone. There also happens to be a gaping, 10-yard hole occupied by no one in particular. Eifert, at this point, has beaten his man, and even if the linebacker was playing man-to-man (which he’s not), Eifert would still be a better option on this play, as he is clearly faster than the linebacker (whom he’s already ran past). Instead, Dalton takes the option to chuck the ball out of bounds.

The frustrating part is not just that he missed Eifert, though. It’s that he had the time. The Bengals had good protection, and while throwing it at this moment still would have resulted in a big play, waiting half of a second could have let Dalton see Eifert (even though he should have read this based on the coverage anyways). It was both a real and hypothetical failure. 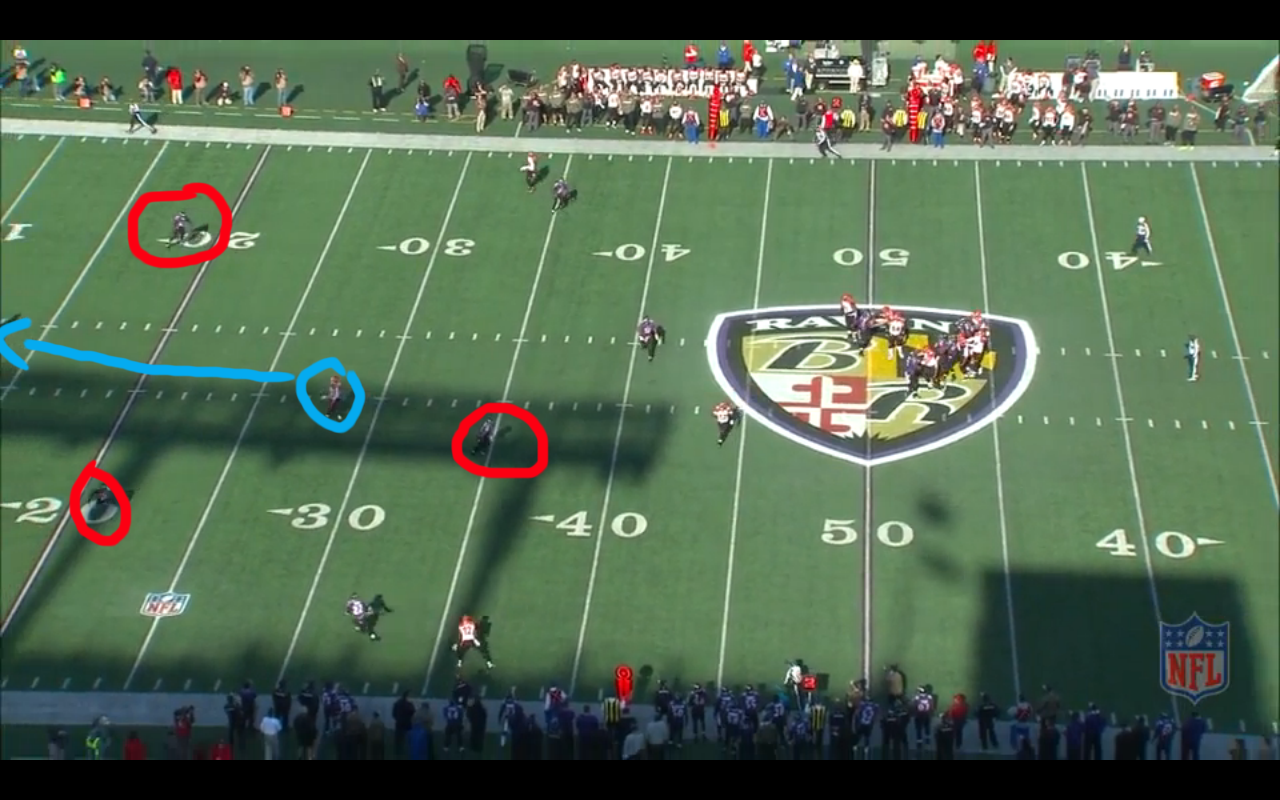 If you don’t believe me that the linebacker standing next to him in the second picture was playing zone, here is your proof. At this point, the ball is well on its way to sailing out of bounds. Dalton is standing straight up in the pocket, clean jersey and all. And there is a wide-open rookie tight end, with nary a player near him. There are times when a quick release is necessary and effective, but this time, Dalton needed to wait to see all of his options.

For the next play, I’m going to ask all parents to have their children sequestered into a safe corner of your home. It is a really, really terrible play. Like, not terrible in the way where you watch a video of somebody on a skateboard taking a hard spill because it’s kind of funny but also not great that they broke their arm. This is terrible in the most basic sense —completely devoid of all good qualities. Are the kids stowed away? Good, we may proceed. 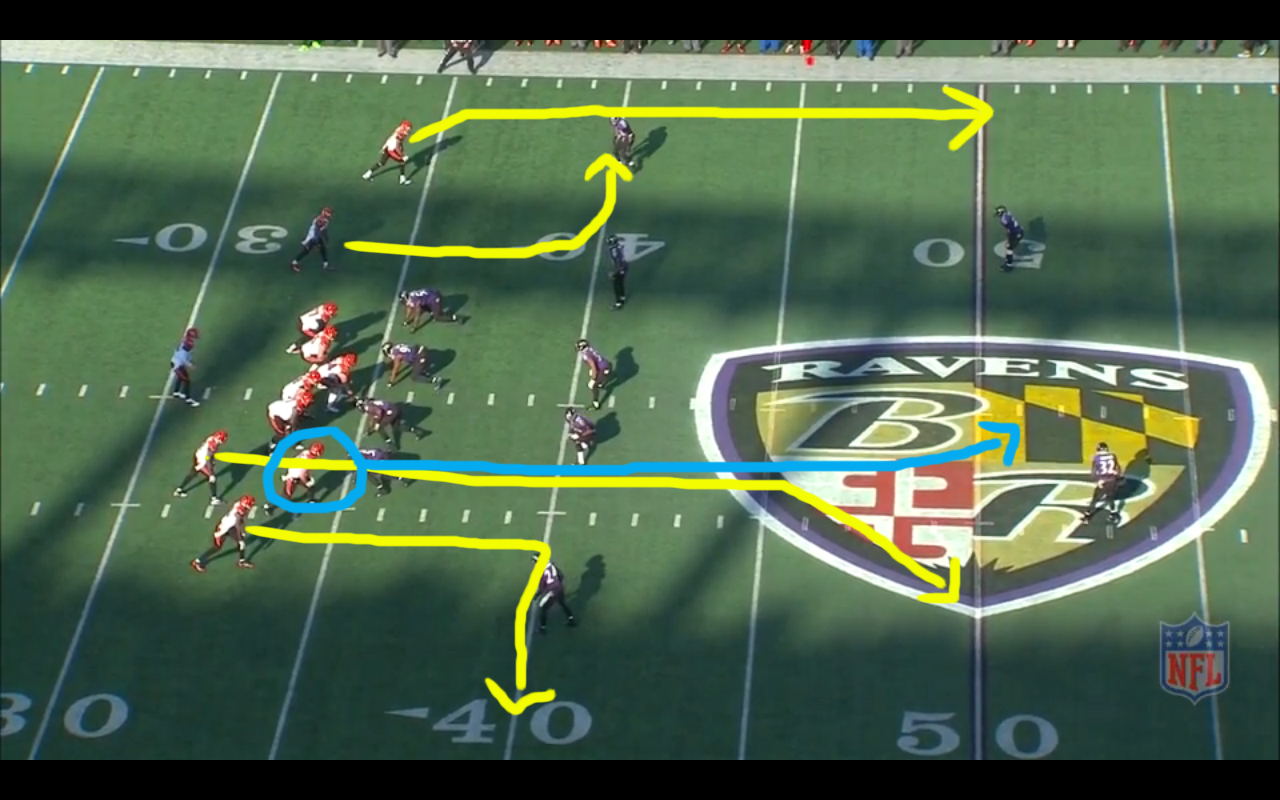 It looks like a safe play from the beginning, just your average combination of deep patterns aimed primarily toward the sideline. There are four wide receivers lined up, two up top and two bunched with Eifert below. The Ravens, for their part, do not bring any pressure, just the four down linemen. Everyone else drops into coverage.

The read on this play is not quite as easy as the prior one. It will be difficult to complete a pass to the left side simply because there are enough defenders to cover each receiver. Same goes for the middle of the field. The right side, however, could prove advantageous if the Ravens drop into zone coverage. (And they will.) In turn, Dalton’s first two reads should be to the right side. They most certainly are not. 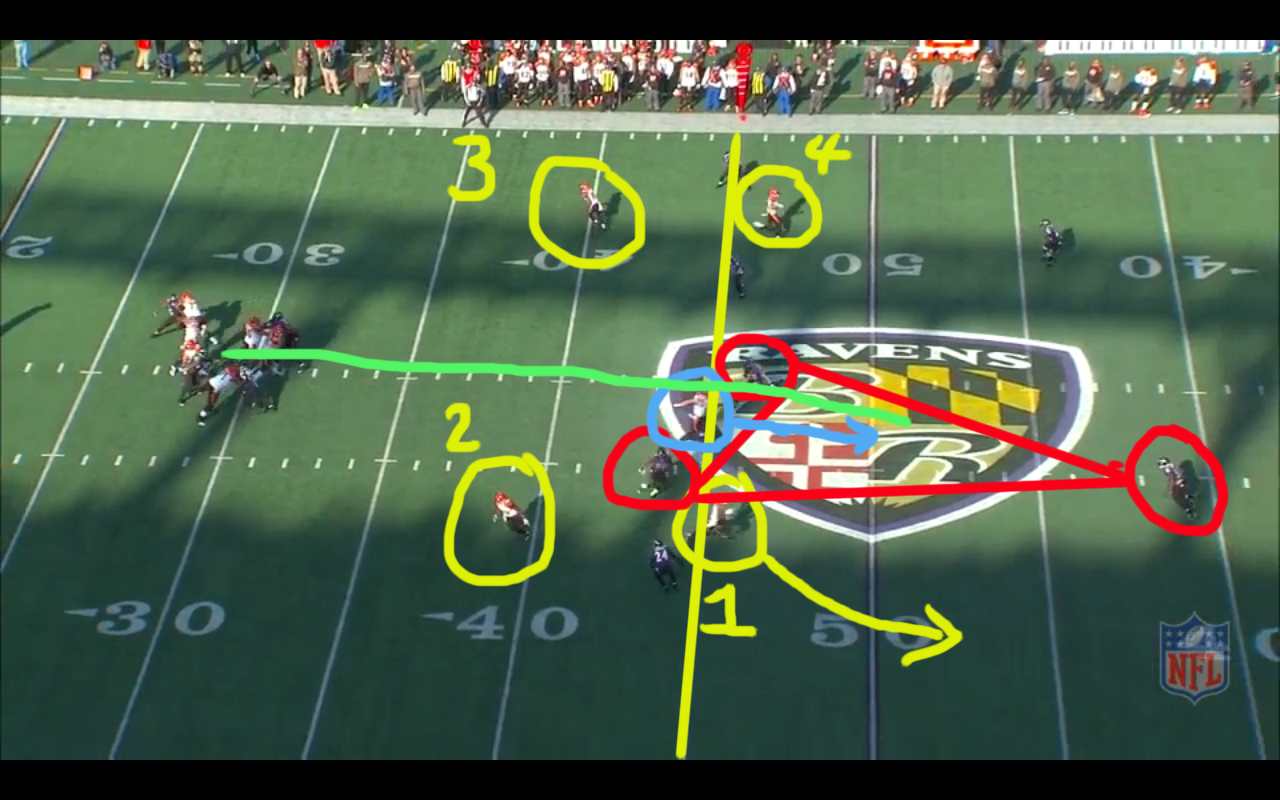 So what do the numbers mean? Well, I’ve conveniently labeled each receiver by what Dalton’s reads should have been. No. 1 is AJ.Green. He is very good at catching the footballs. In fact, few humans can catch the footballs better than AJ Green. He has no one near him, except for a defensive back five yards behind. This seems like a good option.

Also a good option: hitting Mo Sanu on the out route (No. 2). Sanu should receive the ball in space and have a good chance at getting the first down.

If, for some reason, Dalton did not find this appealing, he could hit receive Andrew Hawkins (No. 3), though that has little chance to turn into a first down. It is acceptable nonetheless.

Receiver No. 4, Marvin Jones, is not a good idea, seeing as there are two players covering him. This is not opportune. He should not throw the ball to this player.

The result of the play? THROWING INTO THE FREAKING RED TRIANGLE. There are three defenders there, with a safety (James Ihedigbo) eyeing up the play the whole time. The chance of completion rate on this play is somewhere far below zero.

It’s called phantom pressure—feeling pressure that does not exist. It is a highly detrimental tendency that must be broken if Dalton is going to develop into the franchise quarterback the Bengals hope he can be. And it’s what plagued him against the Ravens.

What happens next is not surprising: Ihedigbo intercepts the pass, returns it inside Bengals territory, and sets the Ravens up in great field position. It’s a terrible decision on what, yet again, could have been a productive play.
But for the final word on this play, I’ll turn to the man who provided color commentary on the game, the most curmudgeonly of all walrus-looking fellows, Dan Dierdordf.

“I can’t conceive of any route that would have put Tyler Eifert anywhere near where that ball went to Ihedigbo.” I award you no points, Andy Dalton, and may God have mercy on your soul.