Playing quarterback is a really difficult profession. That may sound like pundit-speak, but it’s true. The different responsibilities charged to the quarterback on each play are enough to make even the most organized multitasker fret. There is a mental checklist to run down before every snap. Relay the play. Recognize the coverage. Adjust the play if necessary. Recognize blitzes. Adjust protection. Communicate said changes to the 10 other parties involved. Adjust routes for receivers and backs. Fake play call. Read the defense’s response to the fake. Adjust accordingly. Send player in motion. Read response, adjust accordingly.

And the ball has not even been snapped yet.

When the ball is actually in the quarterback’s hands, there are more items to check off, and usually in about 2.5 to 3 seconds. All of this while remaining impervious to the fear that your livelihood could vanish if that 300-pound man lumbering in your direction lands awkwardly on your knee.

So with all this cluttering the mind of a quarterback on any given play, it makes you appreciate when a quarterback is able to deliver something such as a deft motion aimed at misdirecting the secondary. It can be a shoulder turn, a pump fake, or rolling out to one side and throwing to the other. But almost always, it involves the eyes. A quarterback’s eyes drive the play. They can wield as much power, if not more, as his arm and legs. A glance to one side can shift a defender one step, creating just enough room to fit in the throw.

I’m not sure whether deceiving a defense with one’s eyes is a learned skill. Perhaps good coaches can engrain the thought into a quarterback’s head, so that looking off a safety becomes instinctual, like stepping up into a pocket to avoid pressure. But I think there is an innate ability that comes naturally to few quarterbacks. Peyton Manning and Tom Brady do it regularly—that’s one of the things that make them special. Drew Brees and Aaron Rodgers are good at it. So too is Ben Roethlisberger.

As of right now, Andy Dalton does not have it. He has many things that make him a good quarterback. He has good arm strength, enough mobility to move around in the pocket, the ability to read through progressions and a confidence that he can make any throw. Those are all very important qualities in a franchise player. But from what I’ve watched this season, he still lacks the eyes.
When Dalton gets in trouble, like many other quarterbacks, is when he stares down his receivers. He gets fixated on a player and the defense can see it. They read his eyes and break on the pass before it even leaves his hand. Sometimes, he can get away with it. (It helps when A.J. Green is on your team.) But against good cornerbacks, like Cleveland’s Joe Haden, staring down a receiver can prove very costly.

The Week 11 game against Cleveland was a strange one. Sure, the Bengals won, and yes, Andy Dalton threw three touchdowns. But his longest pass was also matched by Mohamed Sanu, and Dalton had a truly bizarre stat line. He became the first player since Marty Domres of the 1972 Baltimore Colts to have at least 25 pass attempts, less than 100 yards passing, and 3 or more touchdowns. The blowout victory may have eased the criticism some and the minimal passing yardage was somewhat a byproduct of the score and the fact that the Browns gon’ Brown. But there were still more critical errors by Dalton that could have been impossible to overcome had they occurred against a better team. And it all starts with the eyes. 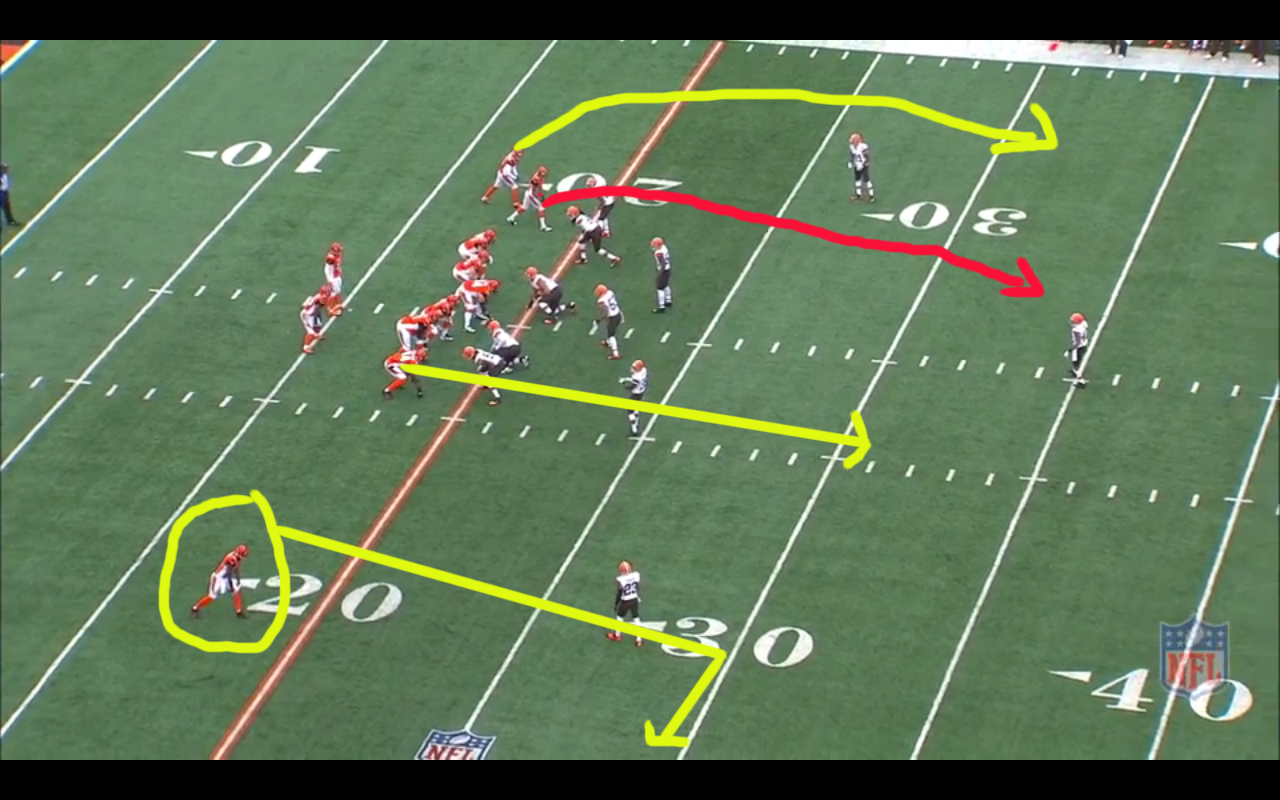 Here, we have three receivers running verticals and A.J. Green (circled) running an out. Mohamed Sanu is at the top, Jermaine Gresham is in the middle, and Marvin Jones is running down the seam.

Dalton’s first look is to his left. He sees that Jones is getting tight bump-and-run coverage, whereas the outside receivers have a big cushion without much safety help over the top.

Before we get into what happens on the play, let’s play a game. I took a screen grab at the point where Andy Dalton decided to throw the ball. At this point, there are four options conveniently labeled for your guessing pleasure. The question: at this point, which receiver should you throw the ball to? 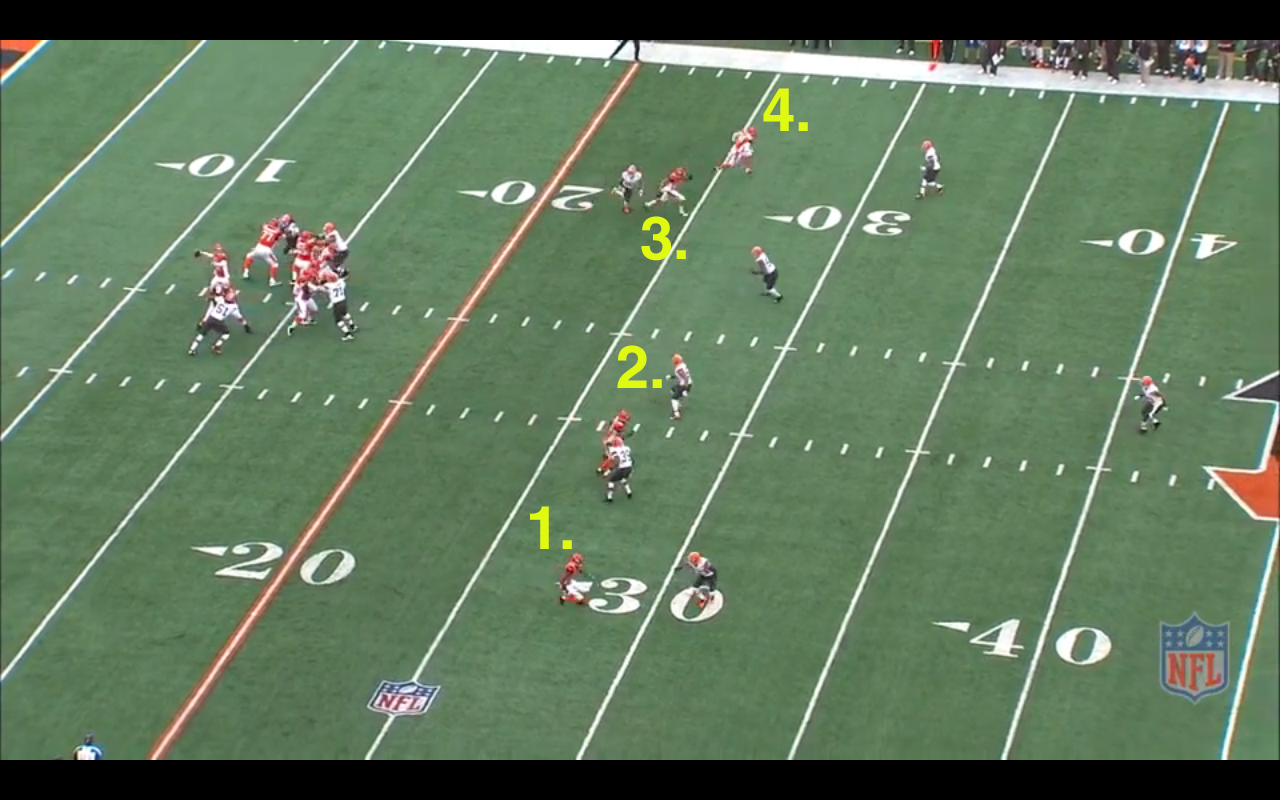 Let’s break it down from worst decision to best decision.

If you chose No. 2, you are an honorary member of the Cleveland support group, the Brandon Weeden Glum Chums. No. 2 is a bad choice. There is a defender playing zone underneath him, a linebacker running with him, and a safety standing directly in his path. Bad idea, friend.

If you chose No. 4, you’re a dreamer. I’m all about chasing those dreams, and Mohamed Sanu is good at a lot of things. Streaking down the field and beating corners on sideline go routes is not one of them. He’ll be blanketed by the corner and require a perfect throw to have a remote chance at a catch, but even then it’s not likely.

If you chose No. 1, you are a hopeless romantic. A quick out to A.J. Green, a missed tackle by Joe Haden, a majestic 70-yard gallop for a touchdown and Green finally telling his best friend he’s loved her the whole time, right? As much as I sympathize, Joe Haden watches Die Hard and Fast and Furious movies. He ain’t got no time for chick flicks. So unless Green runs a precise route (which he does not), this is still going to be a tough proposition. Not a terrible decision, but not a great one.

If you chose No. 3, you are a true visionary, like a young James Cameron or Justin Lin. You can see things that are on the precipice of emerging into great things and capitalize on the opportunity. You’re a bit of a risk taker, but that’s part of what makes you special. And in this instance, you saw the potential for a big play and were correct. 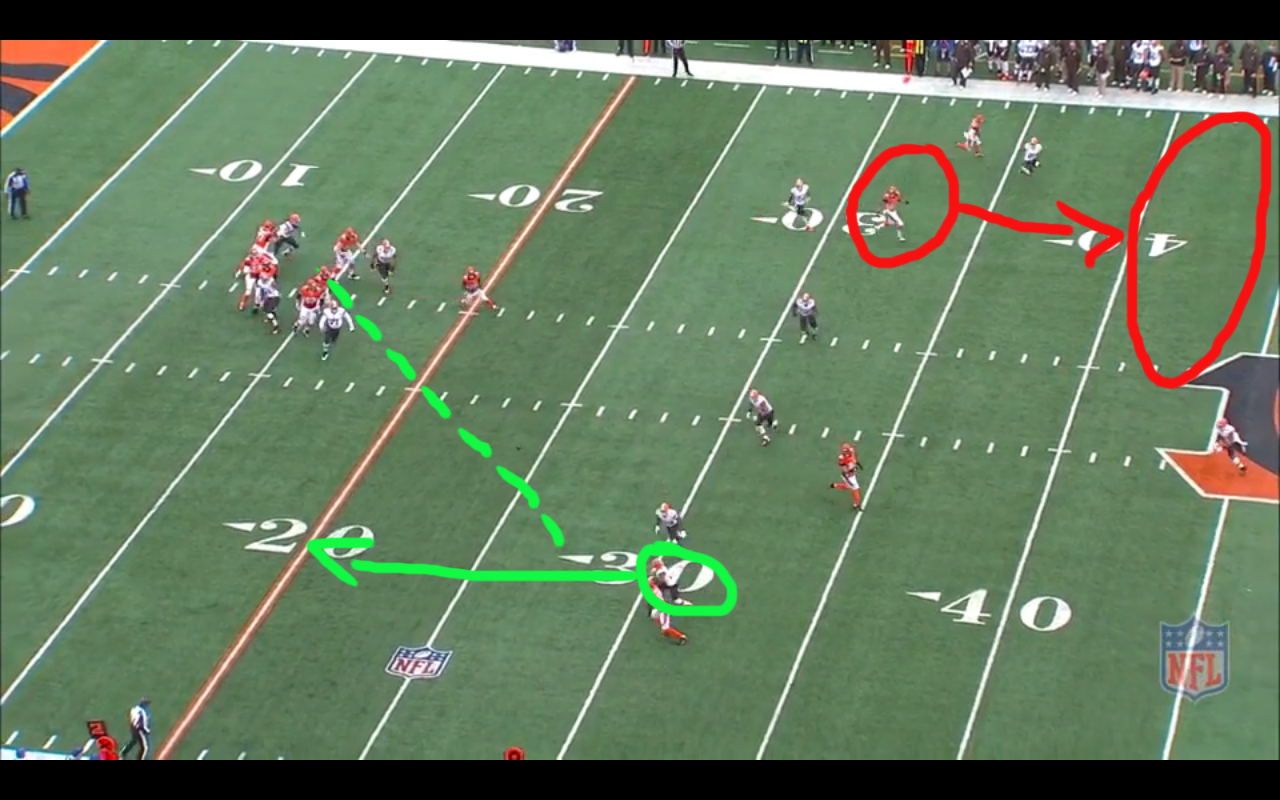 Andy Dalton chose door No. 1. It ended horribly. Dalton is not entirely to blame on this pass. Green should have come across the cornerback’s face and made a play on it instead of watching the interception happen and then pouting. Dalton, however, should have thrown the ball earlier if he was going to Green, but he could have also waited about half a second and looked back to his left to see Jones (No. 3) streaking down the seam. He could have glanced toward A.J. Green, moved the safety over (who is already shading to that side), led Jones inside a step and it would have been a big play. All he needed was a look, but he read that side earlier and moved on. Even worse was, as we talked about last week, that he had time. There is mental clock all QBs have that tells him they should get rid of the ball. Sometimes you need to eschew that clock and see what is in front of you. 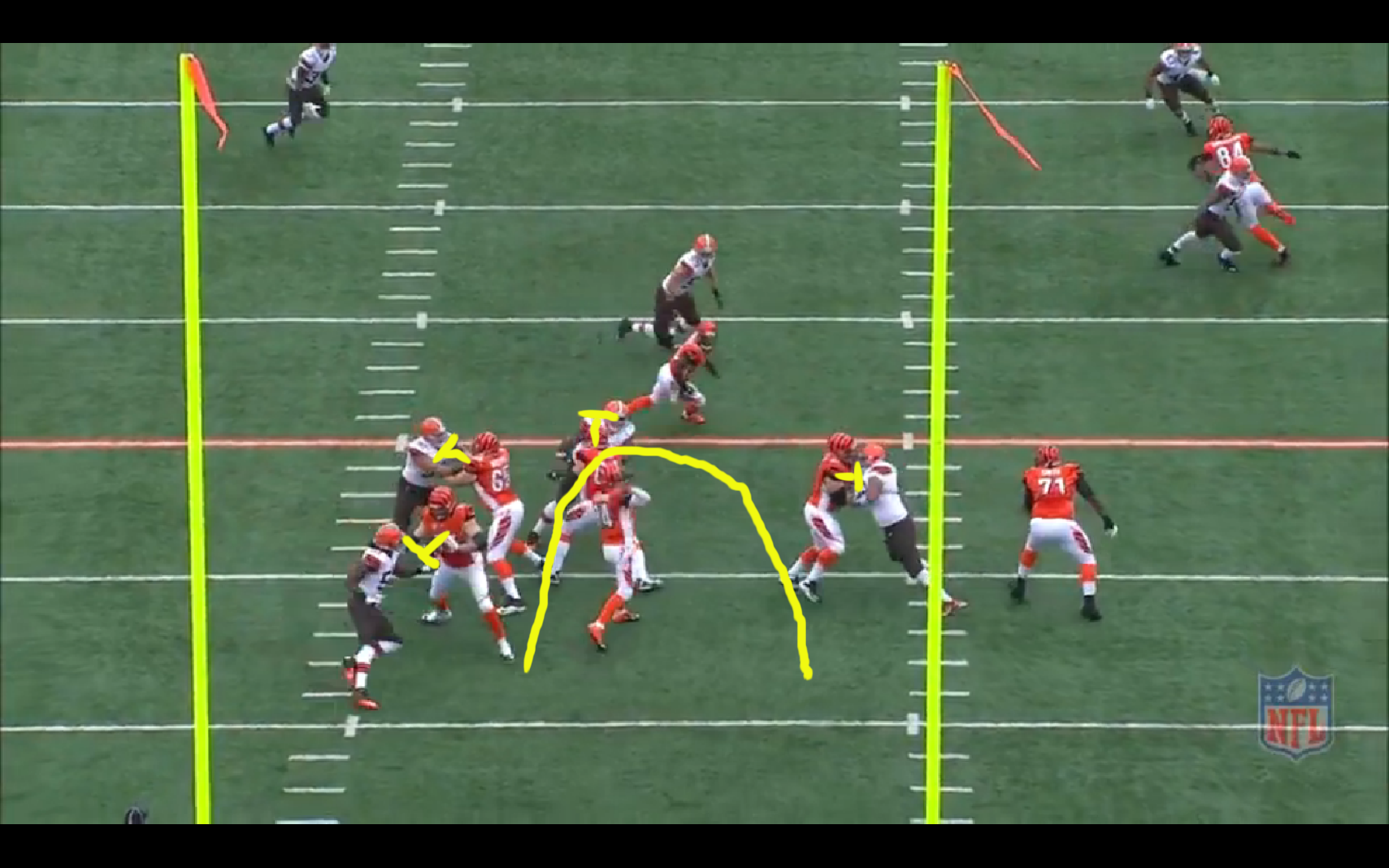 The play is well blocked and Dalton has at least another second before he’s going to really feel the pressure; I think that’s enough time to step into the throw and hit Jones. But Dalton is locked on Green, and Haden sees it. 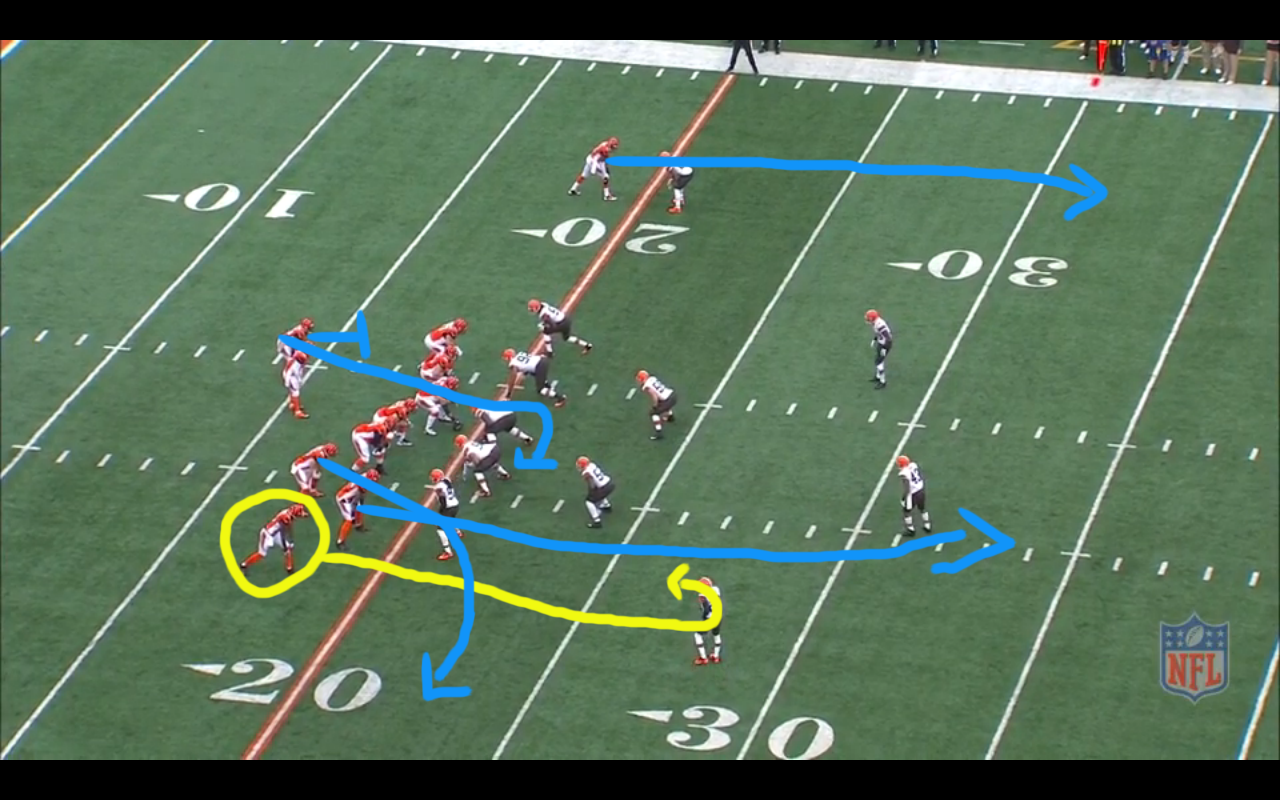 The Browns are going to rush four on this play, leaving seven men in coverage. Green (yellow) is running a curl route, Jermaine Gresham is running a seam route, Tyler Eifert is flaring out to the right, and Gio Bernard is the safety valve. Here’s how it develops: 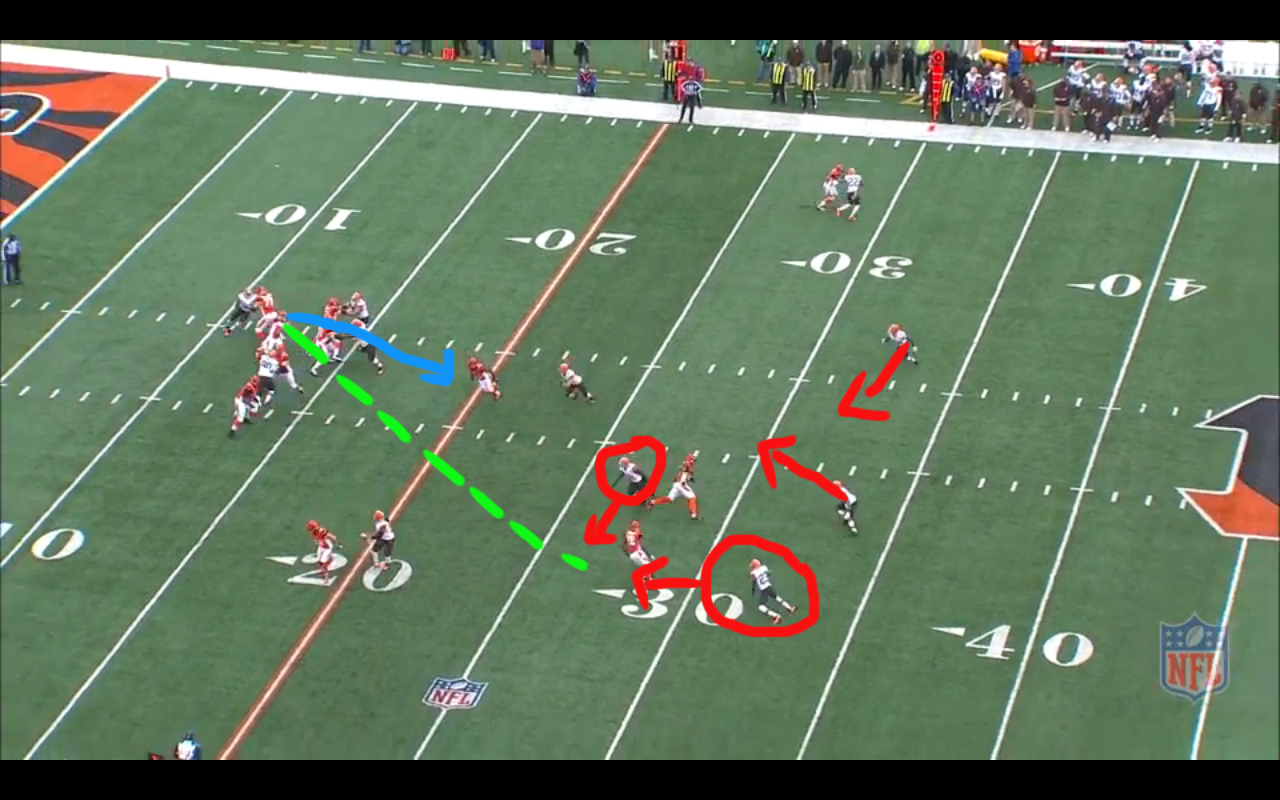 As you can see, the Browns have covered this play very well. Sanu is blanketed again (because that’s what happens when you send him on go routes, Jay Gruden), Gresham is getting attention from the safeties, a linebacker is covering Eifert closely, and Green has a linebacker underneath with Haden behind him.

This decision is not quite as easy as the last play. Here, you have to cut your losses. There is no great play to be made. And that’s okay. It’s second down, your team just gave up a score (following the interception you threw on the last drive) and you just need to pick up some positive yards. (This play is the very next pass attempt after the play above.)

So no, no clear winner. But on this play, Green is probably the worst option. I say probably because he may have been supposed to run an outside curl instead of an inside curl, which would explain why Dalton missed so badly. But regardless, if he threw the inside curl accurately, the linebacker would have likely picked it off as well. As it happened though, it was thrown way outside and Haden took it to the house for a pick-six.

The logical play here is a check down to Gio Bernard (blue arrow). It’s simple, unexciting, and probably not going to net a ton of yards. But minimal gain is always preferred to an interception returned for a touchdown. 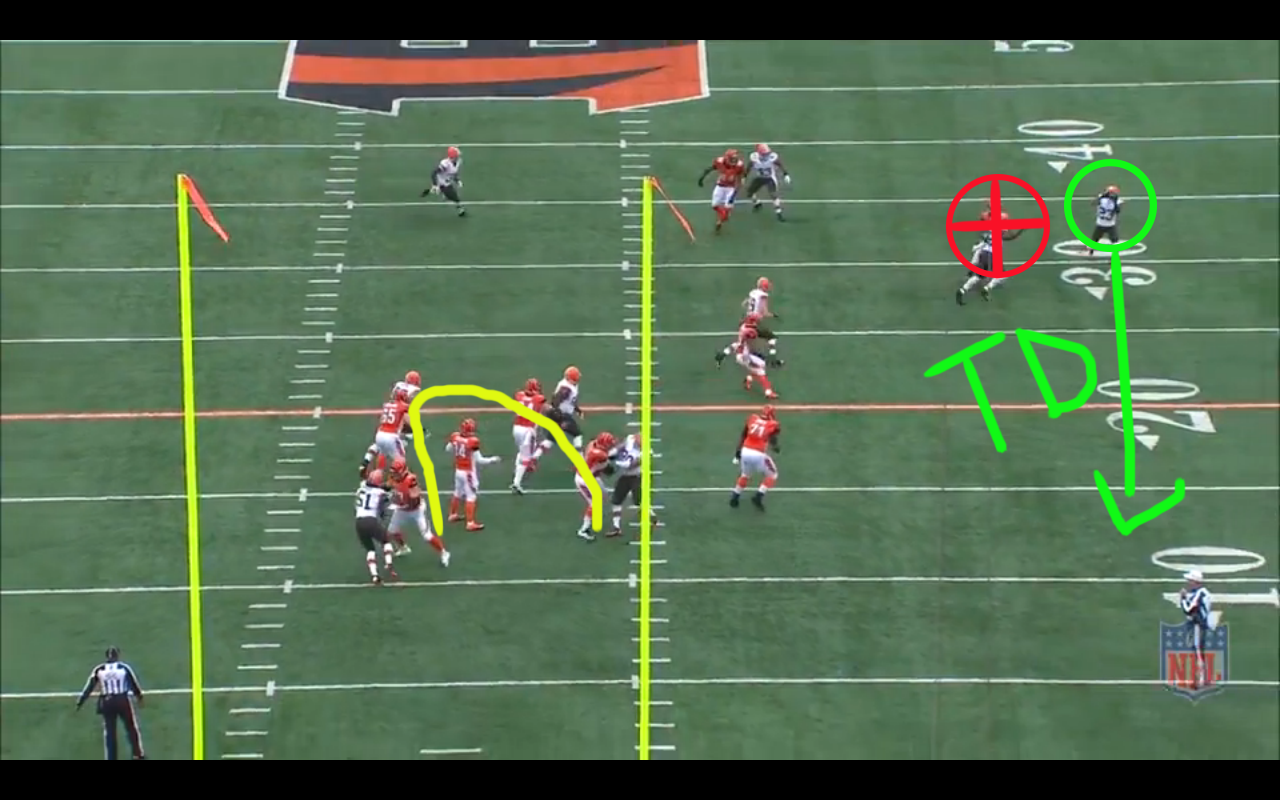 There’s the target and there is where the ball ended up. This is not a play where Dalton could have looked off a defender and made a big play; everyone was well-covered. But locking onto a receiver led to the linebacker cutting underneath and Haden’s ability to play the ball more than the receiver.

And, yet again, Dalton had time. He had time to check it down to Gio and run a third down play. Instead, he put his team in a big hole. The fact that it was surprisingly easy to dig out of should not hide the fact that they were there because of Dalton’s mistakes.

Andy Dalton has shown that he can be a good quarterback for a few series at a time. And maybe the bye week is exactly what he needed to recalibrate and reconnect with some of his receivers. But if the Bengals are going to contend for a conference championship, they are going to need Dalton to step up in the wake of all the defensive injuries.

To close, a word from Browns safety Tashaun Gipson following an incompletion. “He gon’ keep throwing that shit!”

For the sake of Bengals fans, I hope not.