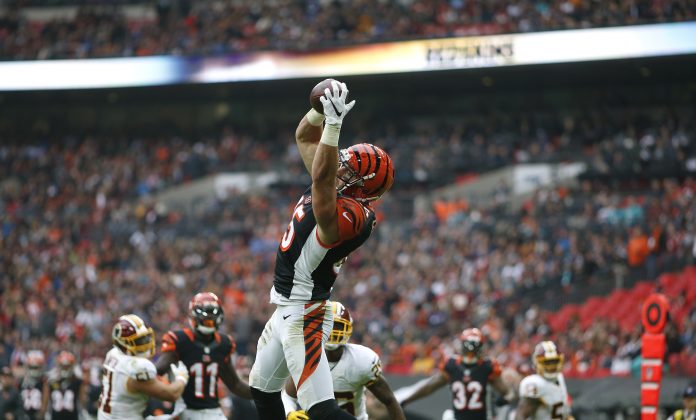 Perhaps the most assuring thing coming out of Week 8 was the excellent performance by Tyler Eifert, just one week removed from his season debut and in his first game with full snaps. There are plenty of concerns with this 2016 Bengals team and much work to do this week while the team enjoys its post-London bye. Thankfully, one of those things won’t be worrying about how to integrate Tyler Eifert into Ken Zampese’s offense. With nine receptions for 102 yards and a score, Eifert showed that he hasn’t missed a beat picking up where his dominant performance last year left off. The Bengals were more efficient in the red zone, have someone to take pressure off of A.J. Green, and a big body to move around the field now that 85 is back. But just what exactly makes Eifert so great?

The Bengals so far this season have been fairly mediocre on offense, especially on third down. Brandon LaFell and Tyler Boyd are effective players, but they don’t command attention or possess the skill set of someone like Eifert, who is built for those third down plays. His combination of size and speed allow him to line up “inline” like a typical tight end, but also in the slot or flanked out wide. Here’s an example from Sunday of Eifert using his natural skillset to the best of his ability.

The Redskins wanted to bring pressure against a shaky Cincinnati offensive line, but by doing so, forced the secondary into a limited set of coverages against the receivers. Here, the pressure forces a Cover 1 look that the team played fairly often against the Bengals. Eifert is lined up in the slot and has one-on-one coverage over the middle. His slant against such a far off defender puts him in perfect position for a first down, and his large frame and general body size make it easier to absorb a tackle from the defending safety. It’s a serious mismatch when you consider everything Eifert brings to the table in terms of speed, athleticism, hands, and size. Not many other tight ends can do the things he can do.

Eifert also replicated what he did best in 2015: attacking the redzone for a huge touchdown right up the middle on this seam route.

Including any other Pro Bowl tight ends you could mention in today’s NFL, I don’t think anyone else high-points the football better than Tyler Eifert. His vertical leap, tall frame, and large hands put him in a great position to go after end zone balls and bring them down without them being forced loose. Even against a Cover 1 coverage that would ideally prevent this very route, Eifert is able to make a play and put points on the board. After being one of the worst teams in the NFL in the redzone coming into Week 8 (29 out of 32, for those of you keeping score at home), I firmly believe that those numbers will escalate at an alarming rate with Eifert back on the field.

His route-running also puts him in a distinct spot that neither Tyler Kroft nor C.J. Uzomah can match. To date, the Bengals other two tight ends ran very simple routes in the first half of the season. Sticks, short outs, seams, and crossing routes were really all we saw for the most part. But again, Eifert delivers by bringing a smooth double move to the table in order to throw defenders off their game.

This stick-post combo does a great job of setting up a commonly used route for a Bengals tight end, the stick, and breaking out of it to allow Eifert to attack the middle of the field. It’s beautiful game planning on the part of Ken Zampese, who is well aware of some of his tendencies, and uses them against his opponent. There’s a whole new section of the team’s playbook that becomes available when you get one of your premier offensive players back. Take for example this great use of the tight end screen.

Again, another example of using great play-calling to get the ball in the hands of your weapons. By sending Giovani Bernard in motion pre-snap, it forces the defense to pay attention to Bernard. This directs attention away from Eifert, who with a great peel-off, slips by the defense for a nice gain. This one wasn’t broken for huge yardage, but even having to respect that Eifert can be given the ball anywhere from 0 yards to 60 yards downfield makes the defense adjust to him. That inherent threat is almost worth as much as him actually doing anything. Because even if Eifert wasn’t putting up great 100-yard performances, the defense has to respect his ability to do so at all times. For that reason alone. I won’t count out the Bengals postseason chances as long as there’s a division to win and a Notre Dame tight end suiting up for Cincinnati.