Ed’s Note: Pausing the Vine videos below by clicking on them once may help your browser run faster.

Two years ago in Houston, the Bengals infamously didn’t target A.J. Green in the first half of a playoff loss. The blame for that gaffe rests squarely on the shoulders of former offensive coordinator Jay Gruden.

Last Sunday, Hue Jackson was determined not to make the same mistake as his predecessor. In the first half alone, A.J. Green had 11 targets, 9 catches, and 90 yards. Green simply abused whomever was covering him and showed a little bravado when he shouted, “Get someone else on me! Y’all better get someone else on me”! Indeed, the Texans did switch the coverage on Green, but it only got worse.

The first play of the day really set the tone for how this gameplan was going to unfold. Green was covered by A.J. Bouye (#34), who was giving him a five-yard cushion. This play was originally a run play, as one can see from the run-blocking of the offensive line. But, Dalton checks it to a quick pass to Green. It was a simple five-yard gain. 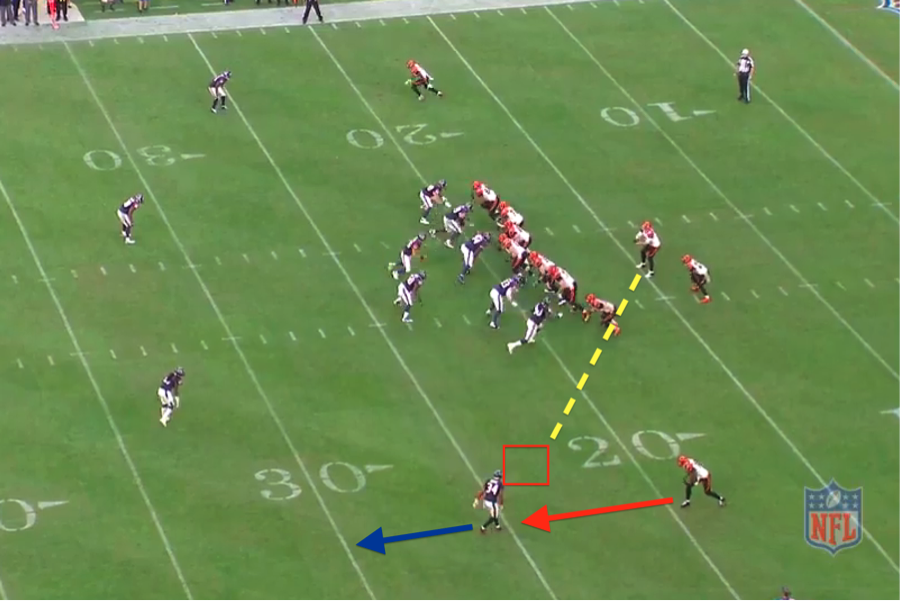 At the start of the next drive, the Bengals were backed up at their own 6-yard line. After a short gain by Jeremy Hill on first down, Dalton went to Green again. It probably would have been a first down, but Dalton stared at Green as he ran his short crosser across the formation. J.J. Watt batted this ball down, but you can see that Green had plenty of room to run for a first down if the ball had gotten there. Most of the Texans defenders on that side had their back turned.

Later in this drive, the Bengals would turn to Green again when they reached a clear passing situation on second-and-long. Bouye gave Green an eight-yard cushion this time. Green ran forward about eight yards, turned and caught a well-timed ball from Dalton. Green then turned to the sideline and gave a stiff arm to Bouye as they both fell out of bounds for a nine-yard gain. This is about as simple as it gets. It’s just an elite wide receiver lined up against a bottom of the barrel corner. The corner yields a big cushion because he’s afraid he’s going to get beat deep. Green takes the free yards. Simple, simple stuff. 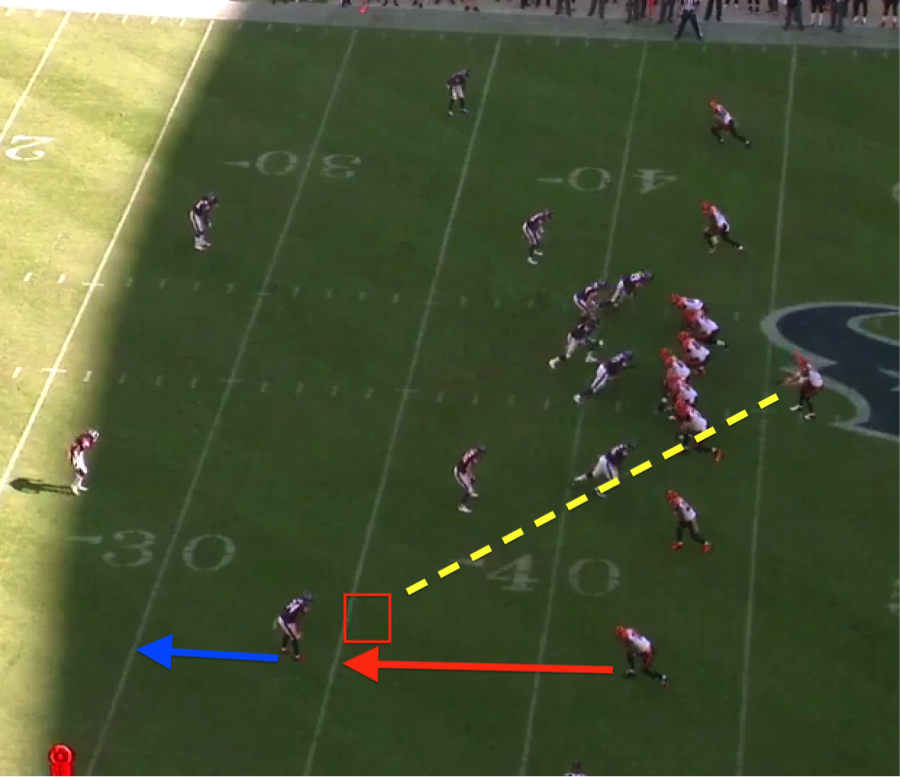 The next play, Bouye and the Texans defensive coordinator decide they’re done giving Green cushion. Now they are going to press him. It’s third down, and Dalton goes right back to Green. Green takes an outside release and runs about seven yards upfield. He establishes his body position between Bouye and the sideline. The backshoulder pass from Dalton is accurate and on time, and Bouye had no chance at deflecting this one, followed by Green’s aforementioned rare burst of emotion.

A few plays later, the Bengals were facing another 3rd & 2. Green lined up on the right side of the formation this time with former Bengal Jonathan Joseph covering him. Joseph gave Green an eight-yard cushion and backed up a few more yards as Green began his route. Consequently, this was another easy throw and catch for a first down. 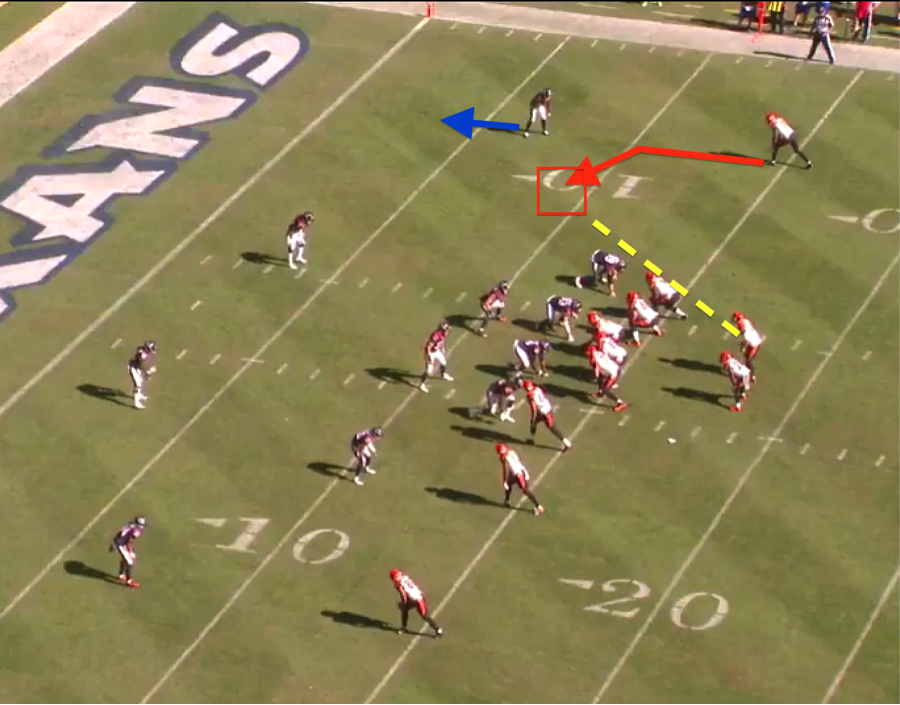 At the start of the next drive, the Texans had benched A.J. Bouye for Darryl Morris at left cornerback. Morris also gives Green an enormous eight-yard cushion and promptly misses a tackle. Green was able to easily run around Morris and drag him for a 20-yard gain.

Again, the Texans decide to kill the cushion and start pressing Green. This is the first intermediate catch of the day for Green. He hops in the air on his release, then plants his left foot down and releases inside and straight upfield. Green fakes inside like he’s running a post route and looks back for the ball. He quickly plants and turns towards the sideline for an easy 15-yard gain.

Three plays later, it’s 3rd & goal. Morris is giving Green a seven-yard cushion, so it’s another short throw to Green. Jadeveon Clowney’s awareness may have saved a touchdown here, as Green was running by Morris with a lot of momentum.

During this third down play, Marshall Newhouse was poked in the eye bye J.J. Watt. This injury led to a brief emergency situation where Clint Boling was moved to right tackle. The Bengals decided to go for it anyways, with a fade to A.J. Green. Morris pressed with slightly inside leverage, though he really doesn’t do anything on this play. Green floats effortlessly through the air to meet the ball at it’s highest point. The problem was, this pass ended up too close to the sideline. Green’s left foot landed completely out of bounds.

At the start of the next drive, Morris gave Green another seven-yard cushion. Green runs the same five-yard hitch, and Dalton gets it to him on time. However, the safety (#21), seems to know it’s coming this time. If he had broke on the route at the snap, he may have had a pick six, but he hesitated.

The Bengals are now in a two-minute drill at the end of the first half. Morris is giving up a nine-yard cushion, and Dalton gladly throws short to Green again on a bubble screen. Thanks to solid blocks by Whitworth and Sanu, Green gains 12 yards, but he is unable to get out of bounds to stop the clock.

At the start of the third quarter, Ryan Mallett was immediately picked off by Rey Maualuga, giving the Bengals the ball in the red zone. After two short runs, the Bengals were facing 3rd & 4. Green was pressed by Morris, but Morris doesn’t get physical with Green. Green just runs upfield and establishes his body between Morris and the sideline. It’s a simple backshoulder throw with great timing between Dalton and Green. It’s a mirror image of the earlier catch against Bouye, but Morris’s coverage was a little tighter. The ball placement by Dalton was so perfect that Morris really had no chance. Green shakes his head at the Houston sideline, again showing rare emotion for himself.

During the next drive, the Bengals find themselves in a 3rd & 1 situation and go short to Green again. This time, Jonathan Joseph is pressing Green. Green fakes outside and cuts inside on a slant. Joseph’s coverage is very good, but Green is able to use his body to shield Joseph away from Dalton’s throw, which was perfectly placed.

A few plays later, things turned sour very fast. It was third down again. The Texans are in a dime package of three cornerbacks and three safeties. Two of these safeties blitz. Dalton knows the blitz is coming, which is why he throws quickly to Green on a hot route. Green runs ten yards downfield and turns around, but he falls away from the ball. Joseph had given Green a decent cushion, but he sat at the top of the route well, and made a great break on the ball. Sure, Dalton missed a wide open Brandon Tate across the middle, but the hot read was always going to Green. The ball was slow and a little inside, but Green even admitted that the interception was his fault:

“The pick was J.Joe being a crafty vet just sitting on it. My fault. I should have broken it up. I should have shielded him. I felt him coming. But good play by him.”

This huge swing apparently convinced the Hue Jackson and Dalton to stop targeting Green so much. Green wasn’t targeted again until ten offensive snaps later. Morris is pressing Green and he tries to get physical this time, but Green easily tossed him aside with one strong push of his right arm. Green gains 13 yards here to bring his yardage total up to 123 for the day on a career-high 12 catches.

Green was targeted once more in the endzone down the sideline, but Dalton’s throw fell about two yards short and was deflected by Morris.

Two fourth quarter targets brought Green’s target total to 16 for the day. Of course, the Bengals were running the ball to churn clock at the end of the game, but the sharp dropoff in targets to Green after the interception was a curious decision. The Bengals really struggled to convert first downs after the interception, allowing the Texans to stay in the game.

Nonetheless, it was a career day for Green. Nothing was deep or over the top, but the repeated domination of Bouye and Morris was extremely fun to watch, especially the moments of emotion. The Texans simply couldn’t hang with Green, regardless of the different coverages they threw at him.
—