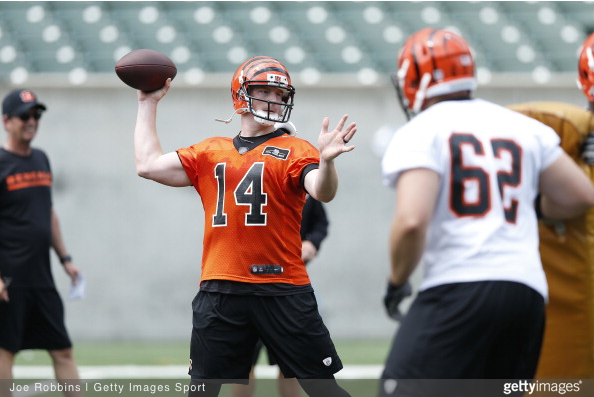 It’s always a little exciting when the media really starts talking about your team. That excitement can also be immediately tempered a little when you know that everything the media is saying is complete nonsense. And not in an “Oh, I disagree with that opinion” way, but in a “No, this thing that are claiming is a fact is not actually true” way.

This was beautifully exemplified on Monday morning when ESPN’s Adam Shefter tweeted that Andy Dalton was to be paid $115 million over six years by the Bengals. The world then exploded because, well, that would mean that Andy “yep, him” Dalton was getting paid more to play sports than Tom Brady or LeBron James. Talking Head after Talking Head after Talking Head was trotted out to scoff, ghast their flabbers, and generally vomit forth apparent horror at this fact.  Except…this fact was not actually a fact. But let nobody say that ESPN ever let the truth get in the way of a good piece of outrage on a day when the second biggest sports story was a Spanish golfer offering to replace a diamond that he was responsible for losing until the diamond was found a few minutes later.

Bomani Jones and Dan LeBatard boldly proclaimed that “nobody could say Andy Dalton should be paid more than Calvin Johnson” which might have been incisive journalism except that nobody was and he won’t be.

Bill Plaschke was horrified, but not so horrified that he didn’t qualify his outrage with the caveat of a question mark: “Did they consign themselves to a life of Tony Romo?” (Well, Bill, probably not unless Tony Romo died at age 2, which is the length of the contract the Bengals are essentially committed to!)

Israel Gutierrez played the devil a little: “He’s good enough to win a Super Bowl” (I think this was a criticism though I can’t really explain how.)

First Take also briefly debated the merits of paying Dalton $115 million. I don’t know who exactly was on the show because Stephen A. Smith was absent for (accidentally?) saying that women who don’t want their professional-athlete husband to beat them in the head shouldn’t provoke them, and Skip Bayles was absent presumably as a gift to humanity (as, incredibly, Stephen A. Smith is the less obnoxious of the two).  They still had plenty of hot takes to offer though, such as “there’s no way Andy Dalton is the fourth best player in the NFL.” Now, to be fair, Andy Dalton isn’t even the fourth best player on the Bengals, but as he isn’t being paid like the fourth best player in the league, it’s something of a moot point—rather like proudly announcing your belief that Godfather III isn’t quite as good as the other two, except if someone paid you to say that and then paid other people to nod solemnly as you did so, while asking people at home to tweet their responses.

For an NFL QB, Dalton doesn’t exactly take up his fair share of media attention. In fact, it’s hard to think of anything memorable he’s ever said. Given that, it’s surprising what a polarizing figure he has become. Just minutes before the fake details of the contract were announced, the normally level-headed Bill Barnwell of Grantland wrote that Dalton “is from the Kevin Kolb and Blaine Gabbert school of quarterbacking” (yep, one of America’s finest sports writers actually claimed that a guy who’s won 30 games in three seasons is one of the worst QBs in the history of the sport). Equally ridiculous are the stats emitting from Bengals.com comparing, in all seriousness, Dalton’s stats to those of Dan Marino and Peyton Manning. The popular consensus in relation to any success Dalton has had is that he’s simply surrounded by talent; the truth is that he was the fifth QB taken in 2011, by a 4-12 team that would lose its three marquee offensive players. And while Dalton has unquestionably struggled in the playoffs, the proportion of blame that has fallen on him is somewhat misguided—Pro Bowl tight end Jermaine Gresham’s hands have turned to Jell-O in the postseason, all-Universe A.J. Green has been anonymous except when dropping potential touchdowns, and the much-vaunted Bengals defense has routinely turned into Swiss cheese. Perhaps most of all, it’s worth remembering that there’s at least one person in Cincy with a worse play-off record than Dalton: head coach Marvin Lewis is 0-5.

The truth is that (swallow, breathe, release) credit must go to Mike Brown, Katie Blackburn, and the Bengals front office. The Bengals aren’t getting a better QB than Dalton any time soon. They also aren’t sacrificing the team to keep him. They’re showing their faith in him but not breaking the bank, knowing that A.J. Green and Vontaze Burfict need to get paid this year or soon after. The team gave itself an out each year from 2016 on if Dalton’s playoff woes continue, but keep him locked up if he becomes the stud they hope he can.

The strangest thing about the reaction to the deal? Even hours after the dust had settled and it became clear that only $17-18 million was guaranteed, the media was still describing it as the behemoth that had long since been disproven: The MMQB’s Peter King continued to describe it as “a six-year, $115-million deal.” Which it will be. You know, if Andy Dalton wins the Super Bowl this year. And if that does happen…well, then $115 million will seem like one hell of a bargain to Bengals fans, won’t it? Plus, we’ll all be treated to hour after hour of ESPN faces telling us that Andy Dalton is the most underpaid player in the history of professional sports. That’ll be nice.