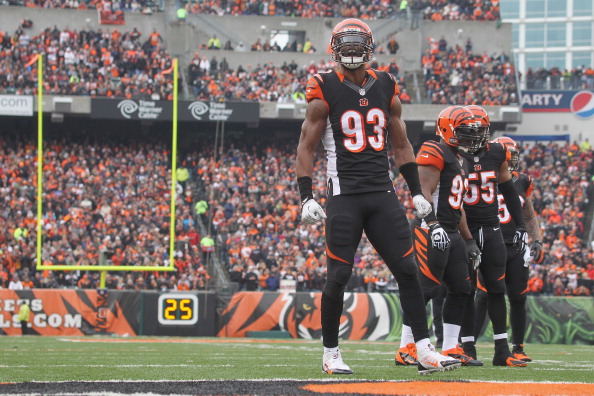 The Cincinnati Bengals lost defensive end Michael Johnson to free agency yesterday. The 6-foot-7, 250-plus-pound pass rushing freak-of-nature who looks like he was chiseled out of marble signed a five-year, $43.5-million deal with the Tampa Bay Bucs.

In terms of market and value, Johnson ultimately got a contract he deserved, just one that the Bengals front office couldn’t afford to offer. And in a way, that’s kind of a good thing.

Since 2011, the Bengals have extended or re-signed Andrew Whitworth, Leon Hall, Reggie Nelson, Carlos Dunlap, Geno Atkins, Andre Smith, and Wallace Gilberry—not to mention a number of other role players on both sides of the ball. They have also saved cap room to extend guys like AJ Green, Vontaze Burfict, Kevin Zeitler, Marvin Jones, and possibly Andy Dalton. It’s a young, talented franchise that has set itself up well for the future by drafting, signing, and extending young, talented players—so much so that it can’t afford to keep them all.

At least publicly, Michael Johnson wanted to remain a Cincinnati Bengal. Last summer he told me that he wanted to play with Atkins and Dunlap for the rest of his career, and that the team “selected the pieces” and shouldn’t “let the pieces go.” The Bengals also wanted to keep Johnson. While reporting my feature on Atkins (shameless self-promotion), it was very clear that just as they had done with Atkins and Dunlap, the team wanted to extend Johnson before and after designating him with the franchise tag last year. But Johnson couldn’t settle for less money than he was worth—Would you? Would anyone?—and the team couldn’t afford to meet his expectations if it meant losing out on extensions for Green and Burfict down the road. And neither side was wrong. It doesn’t make Johnson greedy or disloyal and it doesn’t make the Bengals front office cheap or stupid. It means both made necessary business decisions. The same could be said for both sides if offensive tackle Anthony Collins ends up signing elsewhere too.

Without Johnson or Collins on the roster next year, the Bengals will still be in position to win the AFC North, make the playoffs, and potentially contend for a championship. If the organization doesn’t make any splashy free agent signings this offseason and instead elects to retain its unheralded role players and focus on improving through the draft, the team will still be moving in the right direction. Those who might suggest the Bengals yawn-inducing, laissez-faire approach early on in free agency defies dedication to improvement and success merely confirms that they have too short a memory and a lack of foresight. The Bengals brass (and fans) would have loved to have Michael Johnson back in stripes next season. Same for Anthony Collins. And honestly, the team has the money and resources to do just that, but at the cost of doing the same for other equally talented players down the road.

They are losing good players because they have too many. Not a terrible problem to have.