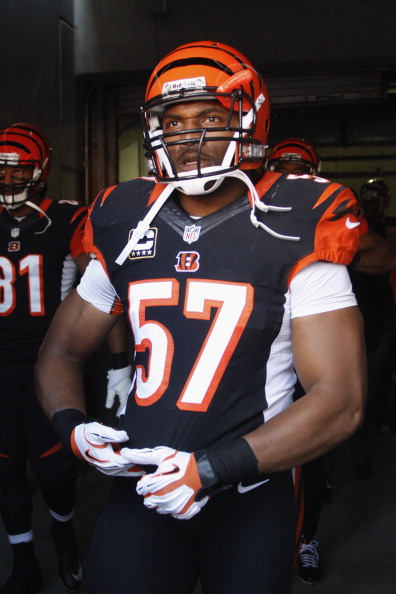 The Cincinnati Bengals have been virtually silent in free agency so far this year. While teams shelled out hundreds of millions of dollars to free agents, Mike Brown and Marvin Lewis laid low. But a quick look at their cap situation shows that the team does not need to conserve money. As of Thursday, the Bengals are $28.2 million below the salary cap, which would lead some to believe that they could afford to pay one or two of the free agents they allowed to leave. But that may not have been the right move, particularly given the prices these players commanded on the open market. So let’s take a look at a few moves the Bengals made, while also focusing on ones they did not make, and try to make sense of the team’s offseason plan.

Why they made the move: In short, this came down to money. Johnson was priced out of Cincinnati’s budget and the team knew it. This decision was ostensibly made when the Bengals chose to give Carlos Dunlap a five-year contract extension last summer, a move I agreed with. Dunlap is a more versatile and consistent defender. After Geno Atkins went down last year, Dunlap’s production actually improved slightly whereas Johnson’s play fell off a cliff. Johnson is a good pass rusher and probably underrated, though still not exceptional, against the run. But I believe much of his production comes from having Geno Atkins on the same defensive line. Plug in another uber-athletic defensive end (though I realize there aren’t exactly DE trees popping up anywhere) and I think that the production would be somewhat similar.

What this means for the future: You ever watch those home improvement shows where a bright-eyed couple buys a fixer-upper home in hopes of completely rebuilding it and making it their own? But when they actually begin the demolition they realize that the wood has been bored by termites, there is plumbing being held together by a two-year-old wad of Big League Chew, and the methane leaking from the stove makes the place a ticking time bomb? That’s sort of what happened to the Bengals last year with Margus Hunt, their third round draft pick and lone Estonian. They knew that Hunt would be a project but he looked completely overwhelmed in the few snaps he had. (Hunt totaled 165 snaps). So he is still probably at least a year away from being a regular contributor, barring an enormous leap in year two. Wallace Gilberry will get a chance to make a name for himself, but I would be surprised if the Bengals didn’t try to snag a pass rusher on the first or second day of the draft. Or perhaps they’ll take a flyer on the “questionable character but talented player” that they’ve been known to go after in the past. Someone like South Florida defensive end Aaron Lynch, who was kicked out of combine interviews for lying. Not a great sign, but he is talented!

Why they made this move: Marv & Co. looked at the roster and determined that, with everyone healthy, Collins would be the odd man out. They have established talent at every offensive line position aside from center, and though Collins played well when pressed into duty at left tackle, they were already paying two others starting tackle money (Andrew Whitworth and Andre Smith). So paying him a similar salary wouldn’t make much sense.

But I wonder if that was the only option. Would it be so crazy to think that the Bengals could have shuffled either Clint Boling or Kevin Zeitler to center? Move Andrew Whitworth to left guard, where he dominated for a brief stretch, Collins takes over at left tackle, Boling and Zeitler will occupy the center/right guard spot and Andre Smith stays at right tackle. Granted, I have no idea the intricacies of playing the center position other than snapping the ball. But it would’ve been cool to give it a shot.

What this means for the future: Aside from denying me the chance to see a weird hybrid offensive line, this doesn’t mean a whole heck of a lot. After releasing the Kyle Cook, they still need to find a solution for center somehow.

Choice No. 3: Do not match the offer to Andrew Hawkins
Hawkins’ deal: 4 years/$12 million, $4.8 mil guaranteed

Why they made the move: Hawkins entered free agency as a restricted free agent, meaning the Bengals had the ability to match any offer the wide receiver received. But I’m not sure anyone was anticipating Hawkins would receive the kind of offer Cleveland ponied up. He has missed 13 games over the first three years of his career, including eight last year. He is 28 years old. He has 86 receptions for 955 yards and 4 touchdowns in his career. But apparently that production was enough for Cleveland to throw out a four-year deal. For the Bengals, I think it came down to this: there wasn’t enough of a sample size to justify paying Hawkins when there are other receivers (see: Jones, Marvin) that have proven more and would justify an extension. Maybe Hawkins will thrive as a speedy slot receiver, but no one could fault the Bengals for not matching the deal.

What this means for the future: The Bengals will likely go after someone in the mold of Hawkins in the draft and this year’s crop of wide receivers is especially deep. Maybe someone like Jalen Saunders, a 5-8 receiver from Oklahoma, will fall to the fifth round or so. Marvin Jones is still under contract for the next two years, so this won’t be a situation where the Bengals chose Hawkins over Jones. More accurate, it was a situation where the team decided that the $4.8 million guaranteed to Hawkins would be better served tagged onto A.J. Green’s impending contract extension.

Why they made this move: Well, they had to sign somebody. (And no, I don’t really count Dontay Moch.) It’s easy to miss Rey because of how omnipresent Vontaze Burfict seems to be on every play. But Rey played well in limited snaps last year (James Harrison’s scowl actually saw more playing time than Rey). His primary asset at this point is speed, giving the Bengals two fast linebackers and Rey Maualuga. (Four sentences about a Bengals linebacker before making a Rey Maualuga joke! I feel like I’m growing as a human being.)

Rey may not be a long-term solution as a starter and will likely find his niche as a special teams player/backup, but the contract is without any real risk for the Bengals.

What this means for the future: I think the Bengals could spend an early draft pick on a linebacker but I’d understand if they are hesitant to do so. The team has been burned semi-recently by picking guys like Keith Rivers (you can blame Hines Ward, I’ll blame it on keeping a head on a swivel) and Maualuga. So maybe the Bengals will opt to draft a linebacker in the later rounds and develop him for a year and groom him to replace Maualuga when his contract expires next season. Another option, however, would be to pass on linebackers altogether and address it next year. Either way, the long-term linebackers needed to accompany Burfict are still far from set in stone.

There have been a few other free agent signings for the Bengals—backup offensive linemen Marshall Newhouse and Mike Pollack, as well as backup quarterback Jason Campbell, to name a few—but few of those players will make any sort of significant impact for the team next year. (And if they do, something went seriously wrong.) But the Bengals seem to be committed to building through strong drafts and staying quiet during free agency. It’s a smart strategy if the players you choose to keep are the right ones. And so far, the Bengals have let go players that can be replaced.