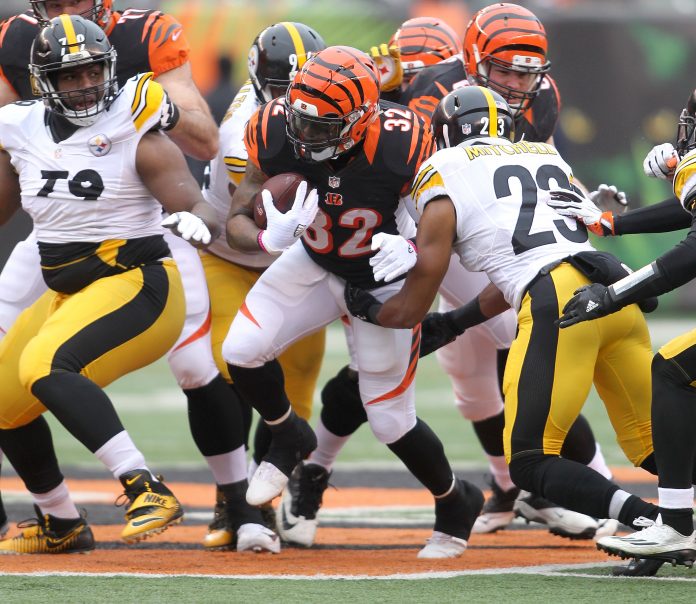 With any previously farfetched dreams of a playoff berth now completely buried thanks to Sunday’s loss to the Pittsburgh Steelers, Bengals fans aren’t left with much left to look forward to in 2016. A.J. Green will likely be returning in time for Christmas Eve’s showdown with the Texans, but aside from him likely reaching his sixth consecutive 1,000 yard season, there’s mostly just disappointment and thoughts of what could have been. At 5-8-1, the Bengals have only shown consistency as a team in one area this season: being outplayed in the second halves of games. This is particularly true for the fourth quarter, where the team has only one touchdown all year in winnable situations (within 7 points at any point in the quarter). That score came against Washington, which later ended in a tie. Over the course of the year, the Bengals rank dead-last in fourth quarter scoring with an average of 3.6 points per game. Even the Browns, who are on pace for a an 0-16 finish that makes the 2008 Lions look competitive, managed to muster up 3.9 points per game in the fourth quarter. So the question is: why? The Bengals have a core group of talent that has been with the team for about five years, and a head coach and coordinators who have been with the team in some capacity for over a decade. Who’s to blame? Unsurprisingly, there is fault in both players and coaches.

Jeremy Hill has the ability to be an extremely successful running back in the NFL. This offensive line is also a year away with the addition of some young offensive tackles. This play looks like most of the Bengals running game in 2015, but it’s a rare reminder in 2016 of their potential. The zone blocking washes everything down in direction with Hill, who uses his vision to find an opening and follow blocks for a solid nine yards. The offensive line does a wonderful job getting to the second level and keeping linebackers off of their running back. Hill, likewise, does a nice job being patient, waiting for blocks to set up, and finds his opening, as this example gives you a good angle to look at his eyes and see what he’s reading. But that was in the first half. In the second half, we see plays that look more like this.

Here, the fault doesn’t lie with Jeremy Hill. Instead this is on Clint Boling, who waits far too long on his combo block with Russell Bodine and misses his chance to scrape off to Lawrence Timmons. Timmons, a veteran linebacker, shoots in on Hill and takes his legs out before he’s able to get too far past the line of scrimmage. Should Boling get to his block, Hill is going to get at least 10 yards because he doesn’t have to worry about being touched until he meets the safety. That said, there’s plenty of film that criminalizes the former LSU running back as well. What’s probably more damning than film, however, is the numbers. 1.8, 1.4, 2.2. These aren’t poor grade point averages. These are Hill’s yards-per-carry in his last three games against teams that aren’t the Cleveland Browns. Excluding the Browns, Hill has only eclipsed 4 yards per carry once this season—the Week 3 contest against the Broncos. It’s true that he’s often been hit at the line of scrimmage this season, but he also suffers from a lack of vision, and fails to be patient for blocks. I wouldn’t be surprised if the Bengals move on from Hill by finding a new bell cow running back in this year’s draft. Rex Burkhead has only hurt Hill’s case by outplaying him off the bench after Giovani Bernard’s ACL injury.

Player’s make up some of the blame certainly, but I find the player’s less at fault than I do the coaching staff. All too often the Bengals start out a game strong, if not hot, and lose all momentum coming out of halftime. The team scheme’s well, calls plays against looks they know they can be effective against, and score touchdowns. Then, once the team’s go into the locker room, superior coaches on the other sideline are making better halftime adjustments, fixing their first-half woes, and completely shutting down the Bengals from kickoff until the final whistle. This was painfully obvious against the Steelers, who kept the Bengals offense in check the entire second half and didn’t allow a single point in addition to just a handful of first downs. Meanwhile, fans in the stands of Paul Browns Stadium knew what was going to happen before it even developed in front of their eyes.

Here, in the first half, the offense runs a four verticals look against a Steelers Cover 2 in man coverage. This is a great defense for Pittsburgh in terms of stopping the receivers running downfield, but the Bengals get the matchup they wanted all along in Burkhead, who runs an out route to the right sideline while isolated on a linebacker he has more than enough speed to out-pace. Dalton dumps the ball off and Burkhead makes some moves in the open field to pick up a first down. It’s great scheming on the part of the offense, and things that are largely adjusted to in the second half. To begin the game, Pittsburgh brought a fair amount of pressure on Andy Dalton. Dalton, a quarterback who likes to get the ball out quickly, had some success against this and was a large reason why the team put up 20 first-half points. However, in the second half, the Steelers blitzed much more sparingly. Multiple times they brought only 3 men to rush the passer. Why? Since Dalton likes to get rid of the ball quickly in a rhythmic fashion, dropping more men in coverage to take away the quick throw makes him panic. He feels uncomfortable when his first or second option aren’t there and too often scrambles out of the pocket, feeling pressure that at times, isn’t there. The Steelers coaching staff adjusted, and let the Bengals beat themselves at their own game.

If you take anything away from this article, make it this: This team was not as good as it may have looked during the offseason. It’s not the loss of Marvin Jones, Mohamed Sanu, or Hue Jackson. Team’s built for longterm success can get over those kinds of losses. The Bengals used to be one of those teams, but no longer is that the case. In 2011, the team was forced to go young, with guys like Geno Atkins, Andy Dalton, A.J. Green, and Carlos Dunlap all in their first or second years in the league. They played early and matured quickly as a result. The influx of young talent made the team better and allowed them to be future-proof. Lately, rookies can’t even find the field for Cincinnati. Darqueze Dennard, William Jackson III, Margus Hunt, etc., all have failed to find early playing time—and for those like Dennard and Hunt who are high draft picks multiple years into their career, that’s not a good sign. Dennard in particular is confusing. A boundary corner at Michigan State drafted to play boundary is now largely being used as a nickel guy. Hunt, a phenom athletic talent that didn’t have much football experience, spent years simply practicing, not seeing the speed and quality of the NFL game, and therefore offering no way to benchmark him properly. The Bengals diverted from what made them good, and became complacent. They stopped playing young players because they didn’t think they needed to. They drafted tremendous prospects because they were the best on the board, even though they didn’t have plans for them. So they sit on the bench and don’t see the field and three years into their career, we’re supposed to be shocked when they aren’t any good. Time has caught up to the Bengals, and a team that’s used to drafting and retaining took a hit when they failed to retain and didn’t play the remaining draft picks when they had a chance.