Should taxpayers buy the Bengals a $10 million present? 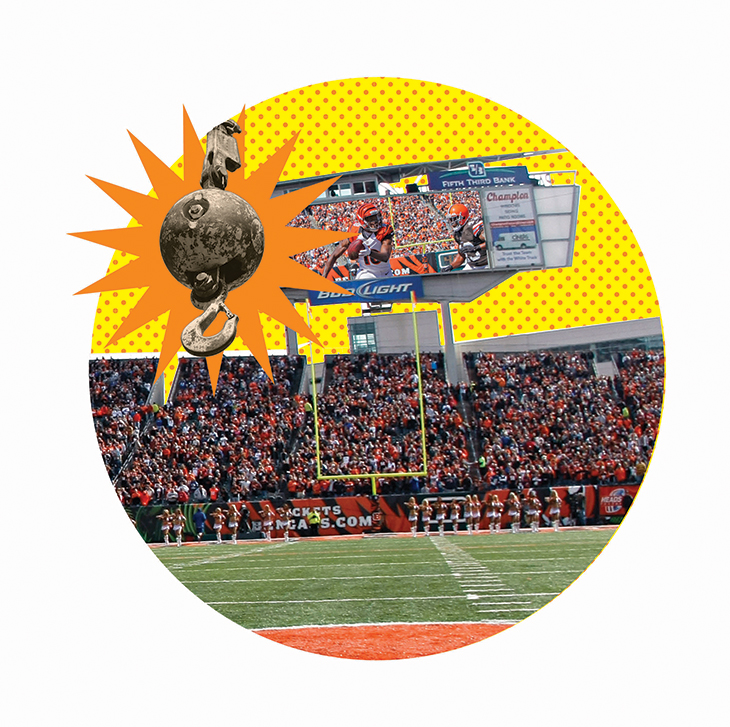 The Paul Brown Stadium scoreboard has been a welcome sight, what with the Cincinnati Bengals currently in the midst of a playoff streak that could very well stretch to three in a row this year. Now that the scoreboard has plenty to boast about, the Bengals want to make sure everyone can see it in crystal-clear high definition. The only catch is, you have to pay for it.

Per the publicly funded stadium deal struck in 1996, Hamilton County is obligated to cover technological advancements—such as a new scoreboard—in order to keep facilities on par with other NFL venues. This is spelled out in the same stadium lease the Wall Street Journal described in 2011 as “one of the worst professional sports deals ever struck by a local government,” costing county taxpayers upwards of at least $450 million. The same lease that was negotiated by then–county commissioner Bob Bedinghaus, who became the Bengals director of business development—which is kind of like Duke Energy sending a paycheck to your air conditioner every two weeks.

As reported in The Cincinnati Enquirer, the estimated cost of the scoreboard is $10 million—which, according to the lease, the team can bill the county for if the county refuses to pay.

OK, but does it have to come to that? In August, Forbes calculated the team’s value at $924 million, posting revenue of $250 million in 2012. The original promise of Paul Brown Stadium was to produce a successful team, something the franchise has finally delivered on. So here’s a modest proposal: What if the organization footed the bill—or at least most of it? It would earn them goodwill to go along with those playoff seasons, and be as big and crystal-clear a victory as any scoreboard could possibly deliver.