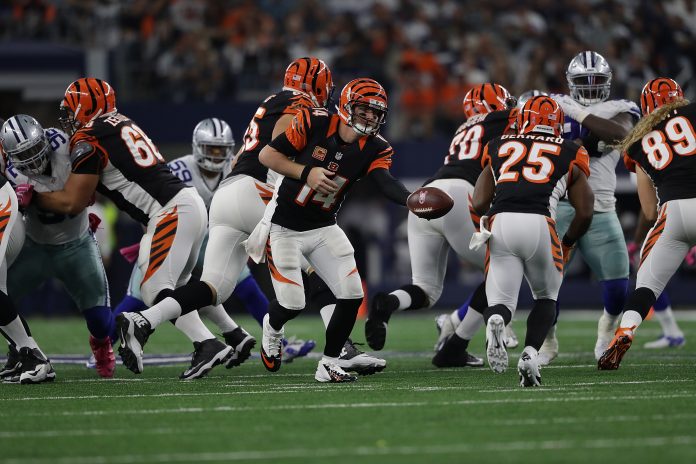 After a game against the Dallas Cowboys that can only be described as a complete debacle, Bengals fans across the city and universe are entering a state of panic. While there are certainly some valid concerns about this team as we creep closer to the midway point of the season, I’m choosing to look on the brighter side of things. A 2-3 record isn’t a start that anyone wants to see, especially from a team that only lost four regular season games last year, but there are a lot of things Cincinnati has done well so far. Things that the team can build off of while they fix the mistakes that have been holding them back to this point. So let’s take down the torches and pitchforks for just a bit and look at a few positives from this 2016 team.

First, it needs to be said that Andy Dalton, all things considered, has been playing absolutely beautifully for the first five weeks. It’s not showing in wins or touchdowns, which is all that matters in the end, but without a run game or a functioning pass protection, I don’t know if he could be doing any better. He leads the AFC and is second in the NFL with 1,503 passing yards. The only player he trails is Atlanta’s Matt Ryan, who is looking to be the early season favorite for league MVP. Dalton is also without one of his favorite weapons in Tyler Eifert so far, and is playing a ton of snaps with two new receivers in Brandon LaFell and rookie Tyler Boyd. Despite being sacked 17 times, he has a passer rating of 96.2 for the season, which is absolutely mind-blowing. Add in a career-high completion percentage of 67.4 percent and you’ve got a threat lining up under center any way you look at it. The days of doubting Dalton are over. In just a few years this young man out of Katy, Texas, has gone from being one of the questions on the team to its unquestionable saving grace.

But we can’t give all of the credit to Dalton, as he’s still got some great weapons to work with despite all of the free agency moves and injuries.

A.J. Green leads the AFC with 518 receiving yards and offensive coordinator Ken Zampese is working to make sure his most talented target gets the ball. The University of Georgia standout is on pace for a career year in his sixth season. Projected by ESPN to finish with over 1,600 yards, it seems like Green may be on track for his first All-Pro season. Outside of the AFC, A.J. is still posting stellar numbers; he’s second in the NFL in receptions, yards, and yards per game.

The second biggest threat in the receiving game so far isn’t even a receiver at all. Giovani Bernard has been mystifying defenses so far out of the backfield and is on pace for a career-high 80 receptions, as well as his fourth consecutive year of 1,000 scrimmage yards. He also ran for some really nice gains against Dallas early on. I feel like Gio would have had an extremely productive day running the ball if the defense hadn’t put the team in a quick 21-0 hole, forcing them to play catch-up and veer away from the run game. While Jeremy Hill is still dealing with the lingering impact of a sore shoulder that he received in the Miami game, I think Bernard can be extremely effective as the premier back.

Defensively, the team is welcoming back Vontaze Burfict who played pretty well against Miami in his debut, but struggled in the Dallas game. He’s still working toward his mid-season form and should be there soon. When he is, the defense should see a significant boost in their run-stuffing abilities. The most notable player on the Bengals defense so far has been defensive end Carlos Dunlap, who has bloomed into a premier edge rusher that teams have to gameplan for. Even with special attention, Dunlap has four sacks and two forced fumbles in five games. That means he’s on pace for back-to-back double-digit sack seasons.

Carlos has only gotten better with age, and his command on the edge with Geno Atkins in the interior should begin to open things up for other players on the line like Michael Johnson and Will Clarke. We’re also seeing career years coming from Margus Hunt and Dre Kirkpatrick, the latter of which is blossoming into the first-round stud he was projected to be. While the defensive performances to date haven’t been great, I think the defense can find added success by keeping coverage simple, as in previous years. Defensive coordinator Paul Guenther has been frequently dropping defensive ends into pass coverage on zone blitz packages this year to limited success. If the talent on the field can be put into a better position on Sunday, I think they’ll be jut fine as a unit.

Finally, I think there’s reason for optimism because this season is still so young. The Bengals have a wonderful and deep core group of now veteran talent to work with. Young talent has been added in the last few years, so the roster isn’t the problem. Cedric Ogbuehi is essentially playing his rookie year out at right tackle, and it hasn’t been great, but most rookie lineman wouldn’t do well against the likes of Muhammad Wilkerson and Von Miller to start their careers. I guess what I’m trying to say is that this roster just needs a little bit more time to put things together. There were bounded to be questions and issues to work through with rookie players and a rookie offensive coordinator being depended on early, not to mention some heartbreaking injuries to date. Thankfully, the Bengals do have a bit of time to straighten themselves out.

Tyler Eifert will be returning in the coming days or weeks, which instantly boosts the offensive firepower. Later down the road, the Bengals can bring back some much needed depth in either 2016 first-round pick William Jackson III or special teams ace Cedric Peerman. Good things are on the horizon for the Cincinnati Bengals, and while they face a tough test on the road in the New England Patriots this week, they should continue to grow. I may not be super optimistic about another AFC North title, I still think it’s completely possible, if not a likely scenario, that the Bengals are a Wild Card team. Following the Patriots game, the team’s next five opponents are Cleveland, Washington, New York Giants, Buffalo, and Baltimore—all winnable games. Which means this team could potentially be 7-4 or 6-5 heading into December. How will it play out? We’ll, but I’m not ready to give up just yet.