Home Sports Football He’s Been Forced to Throw to Some New Faces, but Andy Dalton... 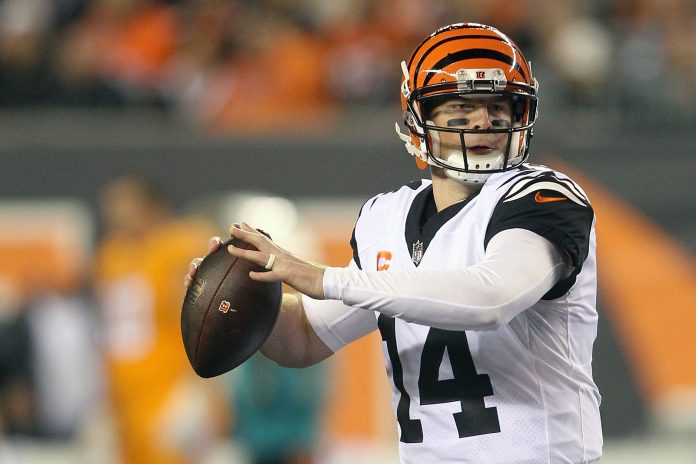 “Don’t let yourself get attached to anything you are not willing to walk out on in 30 seconds flat if you feel the heat around the corner.” — Robert De Niro, ‘Heat’

Prior to breaking his right thumb over Stephon Tuitt’s knee in Week 13, Andrew Gregory Dalton’s 2015 season was easily the best of his five-year career, on pace for full-season personal bests in touchdown passes and interceptions. (Dalton finished with seven picks in 12-plus games played; his lowest 16-game total is 13). Career bests in completion percentage (66.1), yards per attempt (8.4), and quarterback rating (106.2, a massive increase from his previous top number of 88.8) looked like sure things as well.

Then, things began to be taken away from Dalton. First, his thumb injury ended his season on Dec. 13. A month later, the Bengals season was over before Dalton could fully recover. Before that month was over, Tyler Eifert had seriously injured his ankle in the godforsaken Pro Bowl. Fast forward to March when Marvin Jones and Mohamed Sanu, two wide receivers Dalton had been throwing to since 2012, signed with the Lions and Falcons, respectively.

So, with no Eifert (whose return seems likely on Sunday against the Cowboys), Jones, or Sanu to throw to in 2016, who has Dalton been relying on? And has Dalton’s play substantially suffered without those three familiar pass catchers?

Before we examine Dalton’s targets this season (and how often he has been throwing to certain players), let’s rewind and see who Dalton was targeting through the first four games of 2015 and how those decisions impacted his performance.

Unsurprisingly, Dalton consistently looked Green’s way, but it was Eifert (12 targets) whom Dalton force-fed in Week 1, as half of the tight end’s targets through the first four weeks came in the season opener. In Week 2, Eifert and Jones paced the offense with five targets apiece. In Weeks 3-4, Green (23 targets) was the object of Dalton’s affection. Though 10 players registered at least one target, Dalton primarily focused on Green, Eifert, Jones, Sanu, and Bernard, who combined to log 92 percent of Dalton’s targets.

Armed with his full complement of weapons—in 2014, Green was banged up all season, Jones missed the entire year, and Eifert was knocked out for the season in Week 1—Dalton was outstanding to begin the 2015 campaign. What was particularly impressive was Dalton’s ability to pair a high completion percentage with a high average yards per attempt; Dalton’s long for completed passes through the first four weeks were 31, 45, 80, and 55.

Without Eifert, Jones, and Sanu, it’s been Bernard and Uzomah—who had zero targets through four weeks in 2015—receiving the biggest increases in workload. LaFell and Boyd have essentially replaced Jones and Sanu in terms of targets, but as noted above, the effectiveness of the entire offense has suffered without the two departed receivers. (And, of course, Eifert.) Green, who is tied for third in the NFL with 44 targets, has led the Bengals in targets in three of the team’s four contests. (Bernard paced Cincinnati in Week 2 with 11.)

Without three of his longtime pass catchers and facing a tougher slate of defenses—it’s early, but I think we can all agree that the Jets, Steelers, and Broncos will end up being three of the NFL’s top defensive units—Dalton’s numbers have suffered across the board, even with the Bengals passing more often than they did through the first four weeks of last season. Again, Dalton has focused chiefly on five players, as the team’s top five most-targeted receivers constitute 91 percent of the targets.

There are other factors to consider when weighing Dalton’s early showing last season vs. his early showing in 2015. First, the Bengals were significantly better at converting red zone opportunities into touchdowns through four weeks in 2015 (65 percent, tied for fifth-best in the NFL) than they have been in 2016 (league-worst 30.8 percent). Second, the run game has stalled. In 2015, the Bengals averaged 4.9 yards on 124 carries through four games; in 2016, the Bengals have averaged 3.2 yards on 103 carries.

The 2015 Bengals racked up 121 points and were unbeaten through four games en route to an 8-0 start, while the current squad has split their first four forays, scoring 78 points. Undeniably, Dalton’s (as well as the entire team’s) play has waned in 2016. And yet, context is everything. Dalton was stripped of three of his favorite targets, the running game has been inconsistent, and the short-handed offense (with a new coordinator) has faced three premier defenses in four weeks.

And while Dalton’s stats have taken a hit in 2016 compared to last season, he’s actually started quite well in comparison to his other full seasons. Dalton is on pace for a career-best in completion percentage, average yards gained per attempt, and interception rate, and his QB rating (93.8) would be the second-highest of his career, all while showing no ill effects from his thumb injury.

At 2-2 and with trips to Dallas and New England on deck, the Bengals are certainly feeling the heat. It will be fascinating to see how a host a variables (the reliance on Green, Eifert’s return, the run game, LaFell and Boyd familiarizing themselves with the offense) impact and shift Dalton’s play through the rest of the season.