Home Sports Football Margus Hunt Showed Up Against the Jets 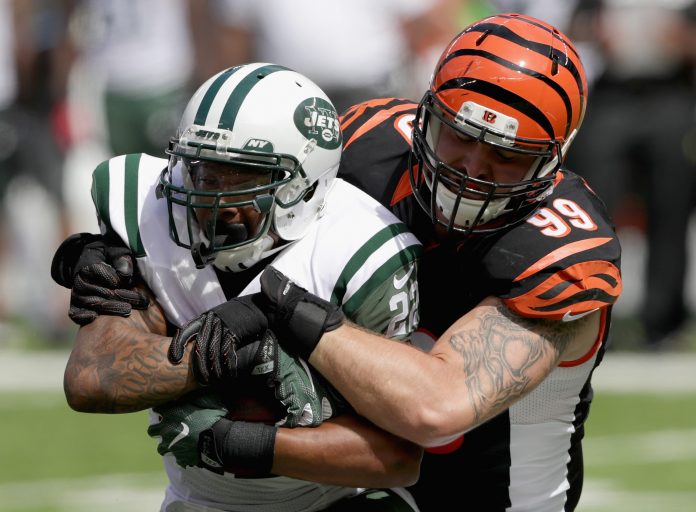 The Cincinnati Bengals came away with a hard fought 23-22 win against the New York Jets on Sunday. For some Bengals fans, this win may have been expected, but what no one saw coming was the emergence of former (and much-maligned) second round pick Margus Hunt. Hunt, a former international track star, was considered nothing short of a project player when he was coming out of SMU. In fact, Hunt had only joined the football team once the track program at SMU folded. The Estonian native was fairly dominant in the college game given his lack of experience, with a talent for blocking field goals, earning him the nickname “The Eastern Block” in the process.

All of the early success didn’t mean much though, as team’s knew how inexperienced and raw he was. That all changed once Hunt attended the NFL Scouting Combine held yearly in Indianapolis. At this event he was able to show just what a mind-blowing natural athlete he really is. Margus, at 6’8” and 277 pounds, led all defensive ends with 38 reps at 225 on the bench press and a superhuman 4.6 second 40 yard dash. This success had teams salivating, with rumors that Jerry Jones was considering taking him in the first round for his Cowboys.

As fate would have it, he fell into the second round where Marvin Lewis and Duke Tobin selected him with the 53rd pick in the 2013 draft. From there, Hunt bounced between a limited role player and gameday inactive for his first three seasons. Struggles to adapt to the technical demands of the NFL made things difficult for him, as he no longer could rely solely on his impressive physical traits to make plays. From 2013-2015 he recorded only 13 tackles and 1.5 sacks on the stat sheet, which led to many Bengals fans pleading for an end to the experiment, hoping to free up a roster spot for another young talent who may be able to develop a bit quicker.

During the preseason, fans still weren’t given much of an indication to believe in the 29-year-old defensive end. A younger third-round prospect in Will Clarke was outplaying him, and the team began cultivating more young defensive line talent in the likes of Andrew Billings and Marcus Hardison. However, injuries popped up along the defensive line, leaving the coaching staff really with little choice than to make Margus an integral part of their rotation in Week 1. He received 30 snaps, or 42% of all possible plays, and he absolutely made the most of them. It all started with a key field goal block in the first quarter of the game.

Down 7-0 with the Jets looking to make it a 10-point lead, Hunt gets a hand up to divert a Nick Folk kick. The Bengals got points on the ensuing possession and the play seemingly changed the momentum of the contest for the rest of the game. But that’s not all he was able to do. He had two passes defended, batting down potential would-be completions from Ryan Fitzpatrick. He also helped contribute to a key goal line stand that proved to be a difference maker in the long run.

Many of us, myself included, were surprised with this performance—though maybe we shouldn’t have been. We haven’t seen Hunt in meaningful game time in about two years. He just wasn’t given the opportunity because so many “superior” players were ahead of him on the depth chart. Now though, with three full years of NFL coaching under his belt, the same physical toolset, and virtually no wear and tear on his body, he’s positioned to break out.

Against the Jets his leverage was better, he used his hands more, and because he’s strong as an ox, his bull rush move could be a valuable pass-rush weapon. Through all the clamor for his release, Marvin Lewis stood by Hunt, and maybe now we know why. For as much as Lewis is chastised for his lack of success in January, he must be doing something right to now be in his 14th season in charge of the Bengals. He’s had a knack for developing good talent through the draft; possibly Hunt has just taken longer than most. It’s not unlikely, as most American college freshman have more football experience than Hunt has to this date. While we don’t know if Hunt will be able to snowball this success and build it into something bigger, we’ll all certainly be watching his every move next week against Pittsburgh.