Home Sports Football What To Expect From a Few of the Bengals Young Role Players... 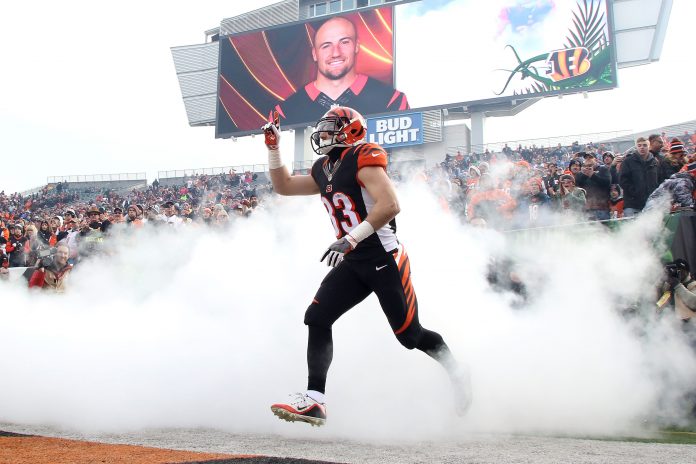 The 2016 season is now (mercifully) behind us in Cincinnati, but that just means it’s time to start looking forward to next year. Over the last few weeks of the year, we saw an influx of young talent and depth on the field. These players—guys like Rex Burkhead, Jake Fisher, Cody Core, and more—have established themselves for a role on the team going forward, or at the very least, as contributor in the NFL. There will be another audition period during 2017 training camp and preseason with the rookies on the team, but no experience is quite as valuable as real, regular season snaps. In one way or another, big or small, these guys made their mark in 2016

We’ll start on the defensive side of the ball with Keivarae Russell. The young corner was drafted in the third round this year by the Kansas City Chiefs but was oddly released without much explanation before the Bengals picked him up on waivers. Russell spent most of the year inactive or on the sidelines, but saw his first snap of regular season NFL action in Week 17 against the Ravens. He definitely made the most of his opportunity.

It only took one snap for the player to come up with his first career interception. The only player to replicate that feat in recent memory was last year’s defensive rookie of the year, Marcus Peters (oddly enough from Kansas City). The Notre Dame grad is under contract through 2019, so he’ll be on the roster for the foreseeable future, especially since his contract is so friendly. But Russell’s future is uncertain as to how he’ll be utilized, as the Bengals have a big decision to make with Dre Kirkpatrick. Kirkpatrick enters free agency for the first time in his young career, and will likely have a market value of around $10 million annually. Should the Bengals not retain Dre, it instantly bumps Russell up the depth chart. Darqueze Dennard and William Jackson III would likely compete with Russell for the vacant boundary corner spot. (It also remains to be seen what the team will do with Adam Jones in light of recent events.) The Bengals seem to like Dennard better in the slot, even though he never played it in college, so it’d likely be a two-man competition between Jackson and Russell on the outside.

While Tyler Boyd was the premier rookie receiver on the Bengals roster, Cody Core came alive the last few weeks of the season for the team. The sixth round pick originally was only thought of as a one-dimensional talent. He reminded me of a deep threat talent that could stretch the field for you, but that’s it—think of a young, raw Mike Wallace in Pittsburgh. However, Core did a great job against Baltimore of showing he has tremendous separation skills at the line of scrimmage. Notice in the above GIF how Core starts an outside release before using his hands to cross the face of the defender before breaking on a slant route. He completely loses the corner and picks up a great gain. This is why the coaching staff prefers Core on the exterior to Tyler Boyd. Boyd has a better feel for sitting in zones and working across the middle, making him better utilized as a slot talent. In 2017m I would expect Boyd’s utilization to remain the same, a consistent target across the middle that will move the chains. Core, on the other hand, will likely see a lot of work as the fourth receiver, while potentially moving into a role as the number two option in 2018 if he continues to develop.

Nick Vigil didn’t start the season with a lot of playing time, but with injuries at linebacker and adjustments after the bye week, the Bengals began to play the Utah State rookie a fair amount. A middle linebacker in college, Vigil has seen a lot of work at outside linebacker in Cincinnati, with a knack for pass coverage. This makes him a future fit for the SAM/strong side linebacker position in 2017 with Karlos Dansby only on a one-year deal. However, the Bengals are picking at number 9 overall in the draft, and there are some highly touted linebacker prospects in Reuben Foster and Zach Cunningham, from Alabama and Vanderbilt respectively. One or both of them will be available for Cincinnati’s pick, and they would be instant starters for the defense. This would make things more complicated for Vigil, as both of those guys appear athletic and speedy enough to be better options at SAM from the jump. That doesn’t necessarily oust him from the lineup completely, as Rey Maualuga could very likely not be returning after the cap casualty he’s levied to the team in recent years.

Finally, there’s Rex Burkhead, who has been the biggest surprise for the Bengals in 2016. In relief of both Jeremy Hill and Giovani Bernard at times, Burkhead has proven that he can be a complete back for an NFL team. His 100-plus-yard, two-touchdown performance against the Ravens in the season finale capped off a campaign that showed his versatility as a runner, receiver, and blocker. Such a season should earn Burkhead some decent coin on the open market. The numbers won’t be eye-popping, especially with the 2017 draft class being historically deep at running back, but teams like New England, Detroit, and the New York Giants could all find a use for his talents. The Bengals would be wise to tie him up to a longterm deal, as his versatility and performance have proven him to be a better back than Jeremy Hill in limited snaps. Historically though, Marvin Lewis teams like having a big back (Corey Dillon, Rudi Johnson, Cedric Benson, Benjarvus Green-Ellis, and now Hill), so it’s unlikely the team abandons the LSU Tiger.

With the big name free agents due up for the Bengals, and the high number of draft picks the team will have at their disposal, the 2017 squad could look different at some key positions once again. Thankfully, the Bengals are in a great position depth-, cap-, and pick-wise to deal with these issues. The coming offseason will likely be eventful before we hit training camp this summer, but the future outlook suggests an immediate rebound atop the AFC North is far from implausible.