Ed’s Note: Pausing the Vine videos below by clicking on them once may help your browser run faster.

Exactly two weeks ago, Andy Dalton was historically bad. His passes sailed out of his hands on a cold and windy night by the banks of the Ohio River. It didn’t help that every single positional group was outplayed by the Browns’ counterparts, but Dalton was the biggest single reason for the loss.

Last Sunday, inside the warm temperatures of Drew Brees’ Superdome, Dalton had the bounce back game that he needed to have. He only attempted 22 passes, but he posted the highest quarterback rating of his career, 143.9. His Pro Football Focus grade (+6.8) was second only to a 367-yard, 4-touchdown performance against Minnesota from Week 16 last year. His passing grade specifically (+6.5) was just as high as Aaron Rodgers’ 341-yard, 3-touchdown performance against Philadelphia. The sports analytics company Number Fire has a statistic called Net Expected Points, which is defined as “a defense-adjusted metric of a player’s impact on his team’s ability to score points.” Dalton’s +23.21 points was the best for any quarterback in Week 11.

Detractors will say that Dalton didn’t throw many passes and it was only one good game, but Dalton’s decision-making and accuracy were the best they’ve been in a long time. Additionally, it revealed a gameplan that Hue Jackson should try to emulate the rest of the year, one that was nearly identical to the Bengals’ other two blowout wins in Weeks 2 and 3 against the Falcons and Titans. In these three games, the Bengals’ running backs averaged 33 carries per game, 146 yards per game, and 4.46 yards per carry. Dalton only threw the ball 23, 23 and 22 times (respectively), as you can see from the table below.

In these three games, the Bengals were healthy enough to execute the gameplan that this team was built around—run the football, play lockdown defense, and pass the ball efficiently. The Bengals offense is now the healthiest it’s been since Week 2, when they were only missing Tyler Eifert and Marvin Jones. With a healthy offensive line and a healthy backfield, they should be able to run the ball productively to control the flow of the game, leading to more comfortable wins.

Now let’s get into the film review of Dalton’s performance to see where he really excelled in Week 11 against the Saints. On Jeremy Hill’s first two carries, he only gained a combined two yards. This led to a 3rd & 8 scenario.

Dalton’s first and only read was to James Wright, working against the Saints’ best corner, Keenan Lewis. Dalton took a quick drop then fired a pass that was caught one yard past the sticks. Wright ran a simple corner (or flag) route to the right sideline, easily beating Lewis’s cushion.

The Bengals would try a fleaflicker a few plays later with only two eligible receivers downfield. Green was double-covered on a deep post route, while Jermaine Gresham didn’t release downfield until it was too late. The protection broke down before Gresham could get into his route and Dalton took a shot as he threw the ball away to the sideline. After a clutch run by Jeremy Hill on a shovel pass on 3rd & 8, Dalton completed a short pass to Sanu working against zone coverage, then Cedric Peerman busted a 21-yard run.

On 2nd & 8 from the Saints’ 11-yard line, Dalton just missed Sanu on a crossing route. He threw it a bit too far out in front of Sanu, who could only get one hand on the ball. Then, on 3rd & 8, Dalton found Jermaine Gresham for the first touchdown of the day. Gresham runs to the first down line, then turns to his left toward the middle of the field. He spins around back to the ball and takes a few steps to the right sideline. It was more of a basketball play than a route really. Gresham just put his body between the defender and the ball and went up and got the rebound. After he caught it, he fought through two tackles and reached the ball across the plane…apparently. For some reason, there was no camera at the goal line. Since it was officially scored as a passing TD, that probably means the refs decided it crossed the plane before Gresham fumbled, kicked it to himself, and recovered it, though we were never given a definitive explanation of that.

The Bengals second drive didn’t start until there were ten minutes remaining in the first half, following an incredible goal line stand from the defense. A few plays into the drive, all five eligible receivers were completely covered. 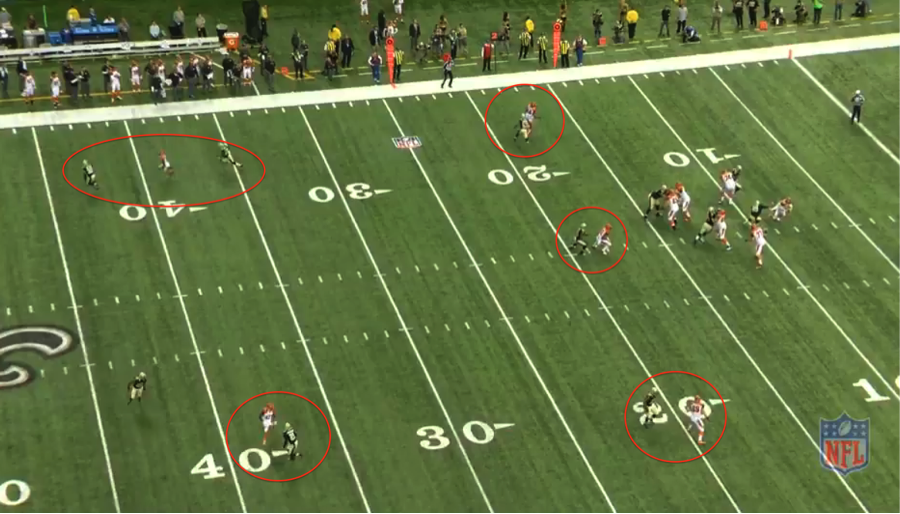 Whitworth yielded a pressure to the inside, and Dalton made a great move to get outside the pocket. Less mobile quarterbacks like Zach Mettenberger, Tom Brady, or Peyton Manning would have taken a sack here. Dalton was able to turn this bad play into a four-yard gain.

Later in the drive, after several successful runs and a short completion to A.J. Green against zone defense, the Bengals ran play-action. The protection was great, but the key part of this play was Green’s release off the line. The Saints corners were pressing, and Green easily beat the press all day. On this play, the corner whiffed his jam completely, leaving him a few yards behind in a bad trail technique. Green ran a corner route, and this was an easy throw for Dalton on a gain of 21 yards.

Also on this drive, the Bengals took a deep shot to Green in the endzone; the throw seemingly dropped sharply at the end of its flight and barely scraped the ground as A.J. Green tried to pull it in for a touchdown. It was ruled incomplete. Dalton threw only three incompletions in this game when you take away two drops and a throwaway. Each of his misses was only by a few inches. That’s top-tier play from a quarterback.

In the fourth quarter, Dalton and Green took over and put the game away. On the first play of the drive, Green ran a hitch route just past the first down line, but was called for a questionable offensive pass interference call.

After a short run, and a drop by Green that was thrown a little too low and outside, the Bengals were backed up at their own 11-yard line on 3rd & 18. A corner was pressed on Green, but he didn’t get his hands on him and just let Green run right by him on a go route. Green was Dalton’s first and only read. He floated a ball that went exactly 50 yards in air and was dropped in stride to Green’s chest. It was probably Dalton’s best throw of the year, and it was a huge momentum swing in the game.

Later in the drive, after another clutch third-down completion to Green, the pair didn’t wait until third down to take another shot. This play was a mirror image of the one above, just to the other side. Green got a free release on a go route, and the safety was slow to come over again. Dalton dropped another dime into Green’s chest in stride, and the game was effectively put away, the Bengals now up 17 with 10 minutes remaining.

If Dalton can keep playing with this efficiency and poise, the Bengals will control their destiny to a playoff spot. Every game matters massively now. The Bengals most likely need to reach 10 wins to secure either the AFC North or a wildcard spot. That means at least 4 more wins, with some tough opponents coming up down the stretch. They need more games like this out of Dalton, and more importantly, can ill afford anything resembling a repeat of the Browns game.