Home Sports Football Why the Bengals Run Game is Struggling 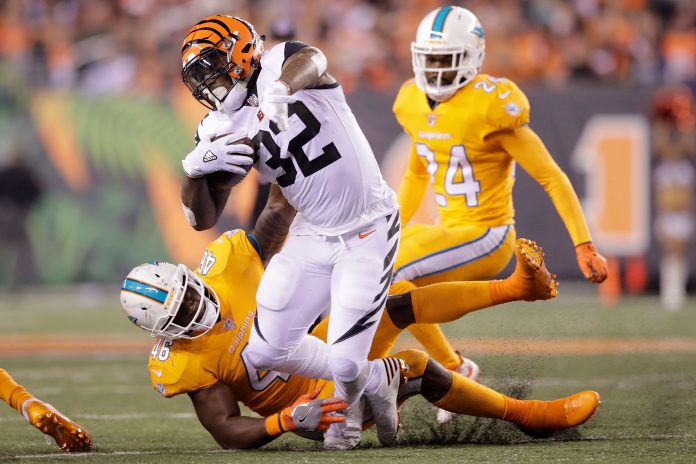 The Cincinnati Bengals rushing attack this season is not the one we’ve grown accustomed to in the past. We’re a quarter of the way through the 2016 regular season, and no Bengals rusher has eclipsed 100 yards in a single game. The team only has a paltry 323 total rushing yards. Projecting the same pace forward would put the team at 1,292 yards for the season, considerably behind the 1,800-plus yards on the ground just a season ago. There are multiple factors that explain why this is happening, and it’s not something that can be pinned on a single person. If the fix were that easy, the team would have done it by now.

The first share of the blame has to go on the offensive line. There have been very few holes for the backs to run through so far to start the year. When there are, Jeremy Hill and Giovani Bernard usually capitalize on them such, as the big 50-yard gain against Denver. A good number of the respectable yardage runs this year have been a result of the running backs powering through contact to get what they can, like Jeremy Hill here.

Here, a lack of effort by C.J. Uzomah to block results in him hanging up Hill as he reaches the line of scrimmage. From there it’s all Jeremy can do to tumble, spin, and fall forward for whatever yardage he can. It results in a gain of 7 yards, but the team can’t expect a back even as talented as Hill to pull off that kind of ballerina footwork on every snap. All too often plays are stalled at the line of scrimmage with nowhere to go. We saw plenty of them last Thursday, even when facing a run defense as bad as Miami.

In the play above, there’s no push at the line of scrimmage from the Bengals, so the interior of Miami’s defense goes nowhere. Ryan Hewitt is met in the hole by the linebacker reading the play, and Tyler Kroft is absolutely overpowered by the defensive end. Everything just collapses in on Gio and he’s shut down for no gain. Bad plays happen to every team, but the Bengals have a shocking amount of carries for 0-2 yards so far this season. It seems like whatever the Bengals do this year in the run game, they’re either gaining 7 or 8 or they’re gaining 0. Even in situations where the Bengals should be able to win easily at the line, they’re losing. Take this draw play for example.

With the Dolphins lined up to play the pass primarily, Ken Zampese has a draw play called up that should work. The Bengals offensive line drops back to pass-block to help sell the run, ideally trying to get Miami to over-pursue on Dalton and forget about the running back. Unfortunately, Miami’s Jordan Phillips takes Clint Boling so far off the line of scrimmage that he backs up right into Bernard as he gets the ball. Gio tries to cut and find some room, but by this point, the linebackers are aware of the run and coming to the ball. Kiko Alonso and the aforementioned Phillips bring him down for another run of no gain.

While it could be that the Bengals are simply getting overpowered by some of these teams, you would think they could win with technique—aside from Cedric Ogbuehi now starting at right tackle, it’s mostly the same on-field personnel as the past couple seasons as far as the run game is concerned. But that hasn’t happened either. In this next play, you see the Bengals in the red zone on Miami’s 10-yard line. They run a power play that the team has been utilizing for years, but they just can’t execute here.

On this play, Uzomah let’s the end come free as designed, because he’s going to be kicked out by the pulling Boling, while Andrew Whitworth becomes the lead blocker for Bernard. Unfortunately, Boling can’t get a piece of the end, even though he’s pursuing really far up field (which should make the block easier, since he’s putting himself right where the offensive lineman wants him). Instead the left guard dives on the turf, Uzomah whiffs on his block on strong side linebacker Spencer Paysigner, and the entire thing ends in a loss of one yard.

The Bengals have played some generous run defenses so far in Denver and Miami, so there really isn’t an excuse, even though the general schedule has been tough to this point. And while execution is a major reason for the lack of run success, there’s also been some questionable play calls to this point. The best example from the previous game would have to be this.

With the team facing a 3rd-and-1 situation with a 12-point lead, the Bengals inexplicably dial up a weak-side option play. The Bengals have run option before, which is fine, but on this particular play, Jake Fisher is subbing into left guard due to an injury to Boling. This is typically not a big deal—Fisher has seen fill-in time before—but the option as a scheme is a very meticulous process. There’s a reason most teams in college that run an under center version of the option make it their main scheme. Bringing in a backup lineman to run a gimmick play with one yard to go when your power back is checked into the game is questionable at best. Even with the poor performance the rush attack has seen to date, you’ve got to assume Jeremy Hill is more capable of getting one yard with a power run right at the defense than on an option.

Between scheme and execution, the Bengals rushing machine is missing a few gears. What has usually been a dependable ground attack is at one of its weakest points I’ve seen in years. The Bengals can continue to win on the backbone of A.J. Green and Andy Dalton with a good defense, but that will only last for so long. This is a team that needs a ground game in order to become the juggernaut that it was for the majority of 2015. Who knows, maybe they’ll learn a thing or two from Ezekiel Elliot and the Dallas offensive line.

Running lanes like those are a running back’s dream. I don’t know whether the 2016 Bengals offensive line is capable of dominating a game at the line of scrimmage like that, but we’re going to find out soon enough.