Home Sports A Bengals Offense with No Name 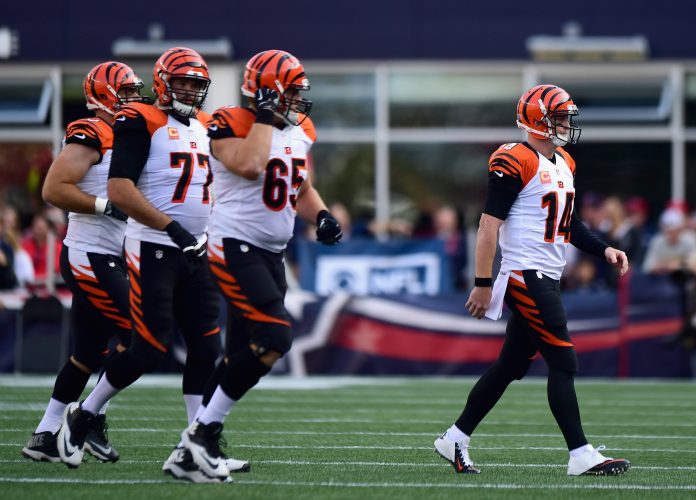 The Cincinnati Bengals offense is putting up yardage at an okay rate, but the points just aren’t there. Part of the reason is likely because this is an offense that doesn’t seem to have one true style to rely on. This is a group that’s going through an identity crisis with Ken Zampese, and it’s only gotten worse as the season has carried on. So just what exactly are the Bengals doing now, and why is it different from what this team has done in the past?

Previously, under Bob Bratkowski, Jay Gruden, and Hue Jackson, the Bengals had very obvious offensive strategies that they implemented through a general philosophies and specific gameplans. Bratkowski, having some talented receivers in T.J. Houshmandzadeh and Chad Johnson, in addition to the young gunslinger Carson Palmer, implemented a vertical passing attack. He utilized Palmer’s arm, Johnson’s route running, and the complimentary skills of the other receivers to pick apart defenses. For the most part it worked, too. The passing game opened up the run, and it resulted in success for backs like Rudi Johnson. Gruden, inheriting a rookie quarterback in Andy Dalton, used a West Coast scheme that focused on quick, rhythmic passes, and minimizing what the quarterback is responsible for. Jackson, most recently, emphasized the ground attack early on, using it alongside creative formations and shifts in order to open up a passing attack that gave more control to the quarterback.

Now with Ken Zampese, however, we really aren’t seeing any singular commitment or identity for the team to rely on. It’s clear that Zampese, who’s been with the team for 14 seasons, has been influenced in some way by each of the coordinators he’s worked under previously, but hasn’t chosen a particular philosophy to preach and adhere to. While some may say variety is the spice of life, that really isn’t how it works in the NFL, or football in general. Some of the best teams in recent memory have very specific offensive strategies that led them to success. For example, during the two years Seattle went to the Super Bowl they had a very straight-forward strategy: run the ball with Marshawn Lynch, make plays on defense, and take pressure off Russell Wilson. The 2007 Patriots racked up a 16-0 regular season mark built on the backs of Tom Brady, Randy Moss, and a vertical, aggressive offense.

The 2016 Bengals, conversely, are throwing in elements of everything from the franchise’s past 10 years, while still adding new things, and it’s becoming too much. The offensive line is, for the most part, a group of mauling, aggressive lineman. The kind that excels at downhill plays from Iso and Power formations with effectiveness. It’s what brought success to Cedric Benson and Jeremy Hill in years past. In fact, Cedric Ogbuehi is probably the first lineman in the past decade that the Bengals have drafted who I would consider more of a finesse lineman (Ogbuehi was lauded for his hand technique in pass blocking coming out of college, but had questions about aggressiveness). Yet, with all these powerful lineman, and a struggling Ogbuehi, the Bengals are running finesse zone blocking schemes.

It’s a wonder any of these types of plays ever work. It’s not what these big hogs up front were built for. I could also do a completely separate article on why the pass protection is atrocious, as well, for similar reasons: they’re trying to do too much. Zampese is taking elements of his previous mentors and twisting them into an over=complicated mess. A lot of the plays the Bengals have run this year could be described as nothing other than “cute.” That doesn’t mean it’s all been bad—there are flashes of success still there.

Still, it’s been too sporadic and inconsistent. “Keep it simple, stupid” is a philosophy that works in almost any industry, though Zampese doesn’t necessarily need to take it that far. He just needs to pick something and stick to it. Play to the strengths of the men in your huddle and you’ll find success. It may be cliché to say, but the Bengals offensive coordinator could very well be outsmarting himself. I have no doubt that Ken Zampese has an incredible football mind, but so far, it feels like he’s just throwing concepts at a wall and waiting for something to stick.