Home Sports Football The Bengals Got Whooped in Dallas 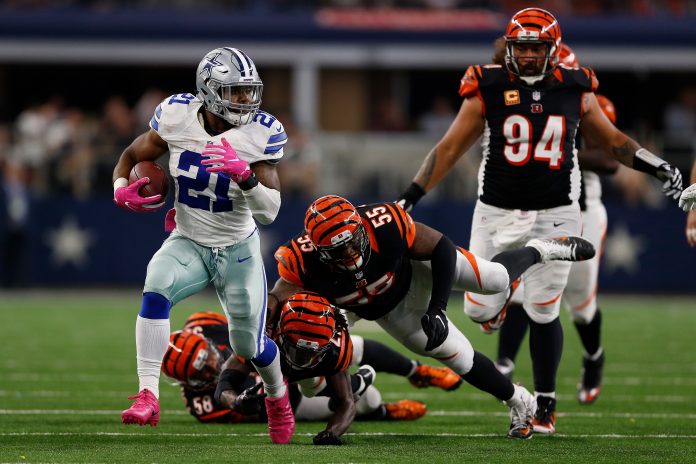 As the Cowboys fearlessly marched down the Jerry World turf for their third touchdown in as many drives during the first half of their Sunday tilt with the Bengals, rookie quarterback Dak Prescott found tight end Jason Witten over the middle for a 31-yard catch-and-run. Near the play’s conclusion, Witten shed Bengals defensive back Josh Shaw like loose clothing at a gentlemen’s club before stiff-arming safety Derron Smith into the ground like an unrepentant big brother would.

Football fancies itself as the ultimate test of a man’s will. At its core, the sport is a continuous exercise in forced and prolonged leverage among some of the strongest humans walking the planet. Sunday, the Bengals were dominated physically and mentally in a way not seen too recently. (A 27-0 shellacking in October 2014 at the hands of the host Colts, a game yours truly watched somberly from an Indianapolis-area Buffalo Wild Wings, comes to mind.) In the end, Cincinnati fell 28-14, a final tally that does not come close to reflecting the disparity between the two teams on Sunday.

At 2-3, the Bengals can’t afford to wallow in self-pity, not with a trip to New England for Tom Brady’s first post-Deflategate suspension home game looming. But after Sunday’s slaughter, one can’t help but wonder if this edition of the Bengals may have to scratch and claw their way to a Wild Card berth; Tyler Eifert is good, but when (or if) the Pro Bowl tight end does come back, he won’t be a cure-all for a team that has regressed a few levels from its ‘special’ 2015 form.

Through the first two quarters on Sunday, the Bengals’ offense moved the ball in fits and starts between the 20s opposite an anonymous-but-well-schooled Dallas defense. (It’s my job to write about professional football, and I like to think I have at least heard of most of the players in the league. But when CBS introduced the starters on the Cowboys defense, I said, ‘Who the hell is that guy?!’ at least seven times.) But true to their 2016 form, once the Bengals caught a whiff of the red zone, they decided enough was enough and sputtered.

Defensively, the first half was an exercise in futility. The Cowboys offense, sporting gifted rookies at quarterback (Prescott) and running back (Ezekiel Elliott) who took full advantage of operating behind an impressive offensive line, scored on drives of 64, 89, and 80 yards to begin the game, with their fourth drive stalling at midfield because Witten took pity on the visitors and inexplicably dropped a sure third-down conversion.

The Bengals opened with the ball in the second half, and the same story unfolded. After Gio Bernard picked up 15 yards on two carries to begin the drive—Bernard was averaging seven yards per carry to that point—offensive coordinator Ken Zampese dialed up eight consecutive passes against a Cowboys’ defense that double-teamed A.J. Green all game. The drive stalled, and Mike Nugent pushed a 50-yard field goal wide left.

On the next play, Elliott sprinted through the heart of what was left of the Bengals run defense for a 60-yard score.

Afterward, the Cowboys supremacy was not accurately reflected in some baseline statistics: Dallas only gained 57 more yards (402-345) than Cincinnati, and the Bengals actually gained six more first downs (27-21) and won the time of possession ‘battle’ by almost four and a half minutes. But the Cowboys won both sides of the line struggles by a wide margin, and the visitors were left to pick up the pieces before a foreboding trip to Foxborough next weekend.

“We just ain’t playing, man. It isn’t us,” Bernard said postgame. “It’s frustrating when you know the guys you have on this team and for some odd reason, it’s just not clicking. It’s frustrating, but that’s football.”

Sunday, the Bengals were pushed off the razor. Five weeks into their 2016 campaign, the team has yet to approach a complete performance. They must prop themselves back up, slither along that edge, and at least submit their best effort sometime soon to find out if 2016 is worth surviving.